I saw Diane Paragas’ feature narrative “Yellow Rose” at CAAM Fest 2019 and enjoyed it immensely. And I’m happy to share the good news that it was picked up by Sony Pictures and will be in theaters on Friday, Oct. 9, 2020. Coinciding with the release is a short video message from director Diane Paragas about what the Nov. 3 election means to her as a member of an immigrant family.  Like the main character Rose, a Filipina with aspirations for country music stardom, Diane Paragas has Texas roots and an immigrant story.  Although Diane was born in Minneapolis, her parents relocated to the Philippines. She returned to the U.S. when she was four years old. Lubbock, Texas became her new home and it was not always a welcoming place. Diane’s determination to see an inclusive, diverse U.S.A. shines through in her video message.

If it weren’t for the pandemic, I would urge each and every one of you to rush to the theaters this weekend to enjoy “Yellow Rose.” If you’re comfortable with the theater’s restricted capacity and safety measures, go. It’s a heart-warming film filled with nuanced performances by lead actress Eve Nobelzada as Rose, Princess Punzalan as her mother Priscilla Grace, Lea Solonga as Gail, her aunt, and country music singer/songwriter Dale Watson.  And the story could not be more pertinent as it starts with the deportation of Rose’s mother and her detention in a U.S. jail. Rose, who is undocumented, arrives upon the scene of her mother’s late-night arrest but avoids being swept up. 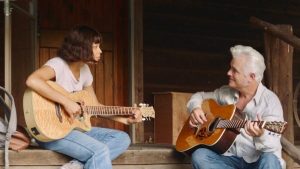 Burdened with guilt and uncertain of her future, Rose pours her energies into writing music and gaining confidence in her voice. She is befriended by many kind people along the way, most of all crusty country music star Dale Watson. Their prickly relationship gradually evolves to genuine friendship in scenes that are directed subtly and acted with tremendous warmth.  Even if you’re not a country music fan, you’ll appreciate the songs that trace the maturation of Rose from an acolyte to a true artist.  I love country music for its poignant storytelling and humor. You’ll find yourself humming tunes from the soundtrack for days and days. Here’s a taste of “Yellow Rose.”

Go to Yellow Rose to get updates on the release date of the DVD and streaming outlets.

To see additional messages by Filipinx educators, actors, singers, and writers, visit Your Vote Matters 2 Me.