“When we’re doing things with other people, that’s where hope is. That is the only way to keep ourselves going.” – Emily Ja-Ming Lee, Director of San Francisco Rising

Emily Ja-Ming Lee is an energetic, bright woman who has earned a reputation as one of the leading social justice movement and electoral organizers in San Francisco. She got her start in movement work by volunteering with a group organizing to stop evictions of Chinese elders in Oakland Chinatown right after she graduated from U.C. Berkeley with a BA in Environmental Science. In 2008, she got a job as a youth organizer at Chinese Progressive Association in San Francisco and stayed there in various positions for ten years. Her responsibilities as CPA’s Political Director thrust her into several campaigns around issues such as fighting housing speculation, raising the minimum wage, and on campaigns for Board of Supervisor’s candidates. Today, she serves as the Executive Director of San Francisco Rising, a multi-racial, grassroots coalition of community organizations focused on the electoral arena and building power for communities of color and low-income communities.

We are pleased to share with you three video clips that focus upon how she became an activist, what she sees in terms of building coalitions to win electoral power, and how she sees sustaining herself in the marathon race that is the battle for social justice.

Part One: Growing Up and Becoming An Activist

After the interview was completed, Emily had a few additional thoughts to share about becoming an activist and sustaining oneself. Her comments are as follows:

The one thing I think I’d want to add is about growing up middle class as a person of color. I sometimes hear from younger organizers who struggle with guilt about having class privilege, and sometimes that guilt can paralyze people and make them question whether they “belong” in the social justice movement. I’ve heard similar struggles from cisgender straight men, white people, and anyone who has grown up with some sort of privilege in America.

I do want to say that a truly transformative social movement requires all of us to fight for liberation, for our own and other peoples’, and these are inextricably linked. As a woman of color, I cannot stop fighting for justice until my working class sisters are free. Our liberation goes hand in hand and we have to fight for each other.

As someone who grew up with class privilege, I firmly believe that I chose to join this movement. I choose to commit my life to building a just world and to fight on the side of working class and poor people. Each of us gets to make that choice. And we have to work on ourselves, build self-awareness, and be open to hearing real critiques and feedback about how our privileges are affecting others and the movement. We need to also support those who are most marginalized to develop their leadership, because it will be the hardest for those folks to have access to power in our movements.

I am also a big believer in getting support so that we can be our full human selves, being vulnerable, and working through the trauma that our capitalist society has inflicted on us. I don’t think any of us can be the type of movement leaders we need or want if we cannot work through our personal traumas, and no one can do it alone. We all need support–whether it’s from healing circles, therapy, mental health practices, spiritual guidance, or coaching circles.

I would never have been able to stay in this movement and grow my leadership if it wasn’t for confronting my fears, insecurities, and conditioned tendencies through many years of one-on-one therapy. It is a privilege to be able to access therapy, and we need to support each other to have access to those mental health spaces. Just as we fight to have access to better education, better housing, and better working conditions, we have to fight for our communities and ourselves to have mental and emotional well-being. 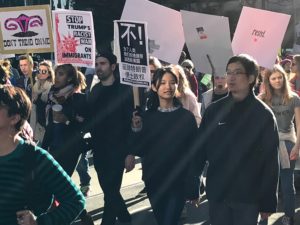 Part 2: Winning electoral power and fighting Trump and the rightwing.

Part 3: Taking the Long View and Sustaining Oneself

East Wind ezine wishes to thank Emily Lee for sharing her thoughts and feelings with us. We also want to acknowledge that the photos used to illustrate the Chin Jurn Wor Ping Evictions Committee (CJWP) were taken by Derek Chung and Diana Pei Wu and found online at reimaginerpe.org/node/4521 and at www.foundsf.org in the article “Pacific Renaissance Plaza Anti-Eviction Coalition.”

Other photos are from CPA, SF Rising, Bob Hsiang, and Eddie Wong.

The interview with Emily Lee was conducted by Eddie Wong in Oakland, CA on July 10, 2018.