Editor’s Note:  Tsuru for Solidarity and Japanese American progressives held programs and rallies across the U.S. on June 6 and 7, 2020 in support of immigrant and refugee rights and in solidarity with Black Lives Matter.  This post contains short reports from a few of the events.

Kim Miyoshi spoke for Tsuru for Solidarity, along with three survivors of the U.S. WWII concentration camps, Kiyoshi Ina, Chizu Omori and Hiroshi Shimizu on June 7, 2020 at Orange Park in South San Francisco. This site was selected because it is near the site of the Tanforan incarceration center, where some 8,000 Japanese Americans, mostly from San Francisco, were first imprisoned in 1942. At that time Tanforan was a horse race track and the Japanese Americans were forced to live there in the horse stables, which still had horse manure under the hastily constructed floors.

See part of Kim’s speech in the video below and see her full speech by going to tsuruforsolidarity.org/tsururising2/ starting at the 1:07 mark.

Tsuru for Solidarity’s vigil and memorial linked the wartime Japanese American incarceration to the current movement to end police murders of unarmed Black persons and also the movement to close the immigration detention camps. Rev. Ron Kobata of the San Francisco Buddhist Church conducted a memorial service while names were read of Black people killed by police or racists, immigrants who have died in ICE detention, and Japanese Americans who died at the Tanforan prison camp.  Taiko drummers with Bakuhatsu Taiko Dan of Davis, CA gave a dynamic performance and participants formed a circle and did an Obon dance to honor the dead.

“The shocking police murders of George Floyd and Breonna Taylor, the WWII incarceration of 120,000 Japanese Americans solely on the basis of race, and the current detention of 40,000 migrants, almost all of them Central Americans – are all part of the long legacy of racial injustice in America. We are calling on all communities to join in solidarity against the continuation of state sanctioned violence against all people of color,” said Satsuki Ina, Tsuru for Solidarity Co-chair.

After the vigil, a car caravan around the closed Tanforan shopping center, where there is a memorial for those imprisoned there in 1942 — took place. –  report by John Ota

Yesterday we joined Tsuru for Solidarity for a powerful action at Tacoma’s Northwest Detention Center to demand freedom for the immigrants being held in cages at NWDC and across the country, and for our Black siblings being murdered and brutalized by state violence. 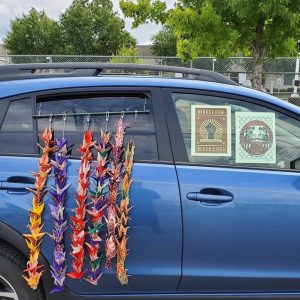 We added our voices (and drums) to the people inside who earlier this week organized the fourth hunger strike at NWDC in two months, demanding they be released to their communities because detention is a health crisis made exponentially more dangerous by this pandemic. We spoke the names of a small fraction of Black, Brown & Indigenous people who have been killed by police or inhuman conditions in ICE custody. We called on our Nikkei family to refuse model minority complicity and choose solidarity with frontline communities demanding that we divest from the violence of prisons and police.

Watch the livestream of yesterday’s action at tsuruforsolidarity.org/tsururising2/ and please follow & support the ongoing work of La Resistencia to #ShutDownNWDC and #FreeThemAll. 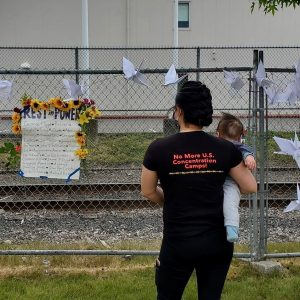 “The legend says if you make a thousand cranes, your wish will be granted. And we’re wishing for freedom and justice,’ said organizer Brandon Lee.

The demonstration was part of a national social justice movement called Tsuru for Solidarity, which was supposed to host a protest of more than a thousand people this weekend in Washington, D.C. to demand the closure of ICE detention facilities. Because of the coronavirus pandemic, the summit was cancelled and, instead, cities across the country held actions connected to issues in their local communities. 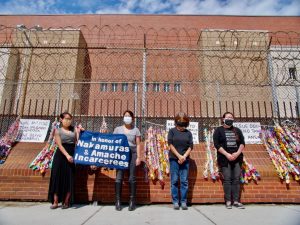 Organizers of the Chicago action said they chose Cook County Jail because they felt the Japanese American community’s experience with mass incarceration during World War II holds lessons for how to handle the coronavirus outbreak in the jail, where seven people have died after contracting COVID-19 and hundreds of inmates and guards have been sickened.

“We saw what was happening, and it really reminded us of how many people in the World War II incarceration camps died because of medical neglect,” organizer Anne Watanabe said. “We really want as many people as possible to be released to prevent more loss of life, especially in a system where so many people are incarcerated just because they can’t afford to pay bail.” 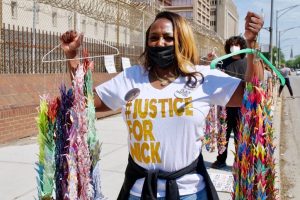 In partnership with the Chicago Community Bond Fund, the local Tsuru for Solidarity organizers invited Cassandra Greer-Lee to participate in the demonstration in honor of her husband Nickolas Lee. In April, Nickolas Lee died of COVID-19 while he was detained at Cook County Jail. Photo by WBEZ.

Inland Coalition for Immigrant Justice and Freedom for Migrants filed a complaint with the DHS office for civil rights and civil liberties on behalf of ICE prisoners at Adelanto. People inside have reported that a disinfectant called HDQ neutral was being sprayed in their housing units every 30 minutes. HDQ neutral has a warning label to be sprayed only “outside or in well ventilated areas.” People inside Adelanto have been complaining of bloody noses and burning eyes. Instead of giving people masks and other PPE, GEO is poisoning prisoners.
⁣ 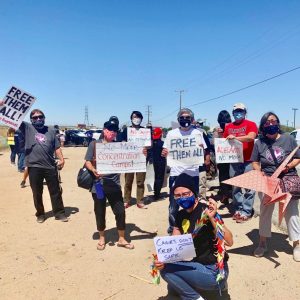 We stand in solidarity with all incarcerated immigrants. Black immigrants in Adelanto and all Black people in prisons and jails, face brutality and violence not only while incarcerated but on the streets and beyond. Black migrants are part of the undocumented community and also are disproportionately deported. ⁣Immigration is a Black issue.
⁣
We demand:⁣
1) ICE must release everyone starting with the most vulnerable (no one can be safe and healthy in ICE jails)⁣
2) While decarceration takes place, ICE must provide protective gear for COVID-19, sanitized housing conditions, and adequate medical care. ⁣
⁣
𝐂𝐨𝐧𝐭𝐚𝐜𝐭 𝐈𝐂𝐄 𝐋𝐀 𝐅𝐢𝐞𝐥𝐝 𝐃𝐢𝐫𝐞𝐜𝐭𝐨𝐫 𝐃𝐚𝐯𝐢𝐝 𝐌𝐚𝐫𝐢𝐧 (𝐃𝐚𝐯𝐢𝐝.𝐀.𝐌𝐚𝐫𝐢𝐧@𝐢𝐜𝐞.𝐝𝐡𝐬.𝐠𝐨𝐯) 𝐚𝐧𝐝 𝐭𝐞𝐥𝐥 𝐡𝐢𝐦 𝐭𝐨 𝐅𝐫𝐞𝐞 𝐓𝐡𝐞𝐦 𝐀𝐥𝐥 𝐟𝐫𝐨𝐦 𝐀𝐝𝐞𝐥𝐚𝐧𝐭𝐨. Script in the photos and at nikkeiprogressives.org/black-lives-matter

SIGN THE PETITION to stop the use of toxic chemicals inside Adelanto! https://www.change.org/p/change-org-immigrants-being-poison… 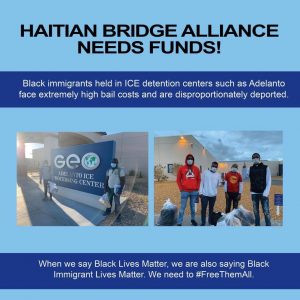 Haitian Bridge Alliance, an organization that supports Black immigrants in the US and Mexico and provides bond funds for detained people, is in need of donations! Link in our bio to donate.

When we say Black Lives Matter, we are also saying Black
Immigrant Lives Matter. We need to #FreeThemAll

DONATE at: https://www.gofundme.com/f/qgebhe-a-cause-i-care-about-needs-help
or find the PayPal link at https://haitianbridge.org/

Find out more about this and other ways to get involved at: https://www.nikkeiprogressives.org/black-lives-matter

Tsuru for Solidarity had originally planned a weekend of educational forums, a rally and march in Washington,D.C., and healing circles on the weekend of June 5 to 7.  These events had to be reconfigured in face of the COVID-19 pandemic.  Thousands of supporters convened online to hear speakers and enjoy cultural performances on June 6.  A condensed two-hour version of the June 6 program is below.

Kathy Kojimoto also alerted us to the action that kicked off on Sunday, June 7  in Washington DC by David Inoue, Exec Director National JACL and steering committee member of Tsuru for Solidarity 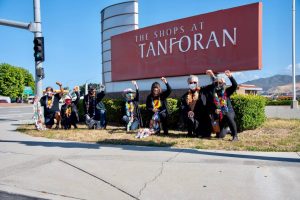