This article by Sita Kuratomi Bhaumik originally appeared in El Tecolote newspaper on Nov. 19, 2019.  The article was published with a full gallery of photographs which can be accessed via this link: http://eltecolote.org/content/en/features/pilgrimage-to-former-internment-camp-reveals-untold-story-of-japanese-latin-american-incarceration/

It was only a few years ago that I heard the term “Japanese Latin American” (JLA). This is perhaps only surprising because I am one. But until that moment, I didn’t understand how our histories intersected across the Americas because of Japanese immigration and U.S. policy. I certainly never thought that a shared legacy would bring me to rural Texas. 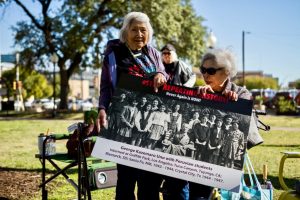 During World War II people of Japanese, German, Italian and Indonesian descent were incarcerated at the Crystal City Alien Enemy Detention Facility in Crystal City, Texas. This included a large number of JLA’s who were seized from Peru. Away from the public eye, this former internment camp run by U.S. Department of Justice was located near the largest immigrant detention center in the United States today: the South Texas Family Residential Center in Dilley. The fall of 2019 marked the first convening of its kind organized by The Crystal City Pilgrimage Committee. They called it “Hidden History – Justice Denied.”

After the bombing of Pearl Harbor, in a climate of rampant xenophobia, President Franklin Roosevelt signed Executive Order 9066, which cited military necessity as the basis for incarcerating 120,000 immigrants and citizens of Japanese descent in American concentration camps. Lesser known is the story of how the United States colluded with 13 Latin American countries to target more than 2,200 people of Japanese ancestry for the purpose of hostage exchanges with Japan. Many of them were incarcerated at Crystal City.

Early Nov. 2, in San Antonio, Texas, around 200 people from across the country—including survivors and family of those previously incarcerated—boarded buses for the 2-hour ride to Crystal City. Many elders wore T-shirts that read “Never Again is Now.” We heard stories of Japanese Peruvian families being taken from their homes, put on ships with armed guards, not knowing where they were being taken. 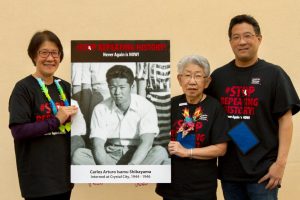 Before being taken to the United States, some were taken to Panamanian labor camps. One Japanese Peruvian was convinced that he was digging his own grave. Upon entry to the U.S., they were instructed to strip naked and sprayed with DDT. In New Orleans, their passports and identification papers were taken and never returned.

Without papers, these JLAs were declared illegal enemy aliens subject to deportation to Japan, a country which some had never known. Over 800 were included in two prisoner of war exchanges between the United States and Japan. At the end of the war, Peru refused the majority of Japanese Peruvians for re-entry, so many remained within the United States.

As we neared the entrance to Crystal City, one of the organizers told us to look out for a statue of Popeye. Having named itself the “Spinach Capital of the World,” the statue was installed in 1937 and a Spinach Festival continues today. 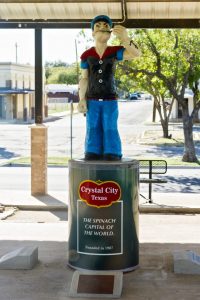 Before it was a concentration camp, Crystal City Alien Enemy Detention Facility was a migrant labor camp. In fact, Immigration and Naturalization Service (INS) leased 200 acres from the Farm Security Administration to create the detention center. In the 1970s, Crystal City also became the site of historic Chicano/a organizing including the Raza Unida party. Grassroots organizing and student walkouts demanded major changes in education and governance. The iconic Popeye statue was even temporarily painted brown in 1970.

The bus pulled up to a fenced concrete expanse, the site of the former swimming pool and irrigation reservoir. Internees built it to stave off the Texas heat. It also became part of the propaganda to demonstrate that life on the inside was fine despite the guards and the barbed wire. That morning, an interfaith memorial service was held with local city officials and community members.

One by one, attendees offered a pinch of incense and a white carnation to pay their respects. Rev. Duncan Ryuken Williams sang in a low register. In July, he and other Buddhist leaders joined over 400 protestors, risking arrest to take action against the proposed transfer of 1,400 children to the former WWII detention facility at Fort Sill. 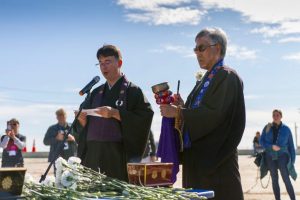 Remnants of the former internment camp are embedded in with the public school campus. A few of the former classrooms from the WWII camps are still in use today. I stared at an empty flagpole in the center of an arrangement of bungalows. Along the main road, the foundation of the cottages where families lived sticks out above the grass. One 92-year-old former internee sat on the edge of the concrete drawing a map on the back of her name tag to show how their family fit in such close quarters. When another survivor said that his brother died while incarcerated, she said that, as a nurse, she knew it could have been prevented with proper medical equipment. 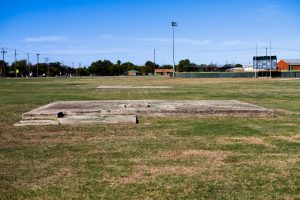 After a lunch hosted by the high school, an elder approached me, asking me about my connection to Crystal City. I told him that my grandparents emigrated to Colombia in 1929 and that my grandfather was incarcerated in a camp in the interior of the country along with other people of Japanese, German, and Italian descent. He had never heard of this history. “You mean to tell me,” he said, “that your grandfather never set foot in the United States, yet he was incarcerated by the U.S. in another country?” I nodded my head.

As we boarded the buses back to San Antonio, we looked out the window for the Dilley detention center. At a site visit in preparation for this convening, lead organizers held a solidarity action at Dilley, hanging over 30,000 tsuru, paper cranes on the fence. Tsuru for Solidarity emerged from this action and is now organizing Japanese Americans for a “National Pilgrimage to Close the Camps” June 5-7, 2020 in Washington, DC. As we pass by on the main road, a small job recruitment banner hangs on the fence. The correctional facility and the detention center in Dilley are major employers in the area.

I think of the estimated 15,000 migrant children currently detained in the United States and the staggering harm that is being done. Seventy years from now, what will the descendants of these survivors need? What will we need to remember and heal? What action can we take right now? I look behind me and everyone on the bus is asleep, the weight of the day had settled in like a blanket. 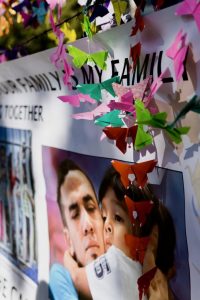 The next morning there is a Solidarity Rally for Immigrant Justice in San Antonio. The Crystal City Pilgrimage Committee organized representatives from Boat People SOS, Huston, Dilley Pro bono Project, Interfaith Welcome Coalition, Nikkei Progressives, RACIES, SA Stands, Society of Native Nations, and the Texas Organizing Project. Members of the Carrizo Comecrudo shared their work on a cease-and-desist order to temporarily halt construction on the border wall on their lands.

Among the speakers is Bay Area resident Libia Yamamoto. She was born in Peru, kidnapped at the age of 7, and interned at Crystal City. Seated on her walker, Yamamoto’s voices rises and cracks. “That traumatic day comes back to me. I remember how I felt and how I feel for the children. I feel so helpless that I cannot do anything for them. But I remember that moment in time so vividly. And I feel for them and I pray for them. I pray that they are being watched and cared for. And I pray for the leaders who put them there.” 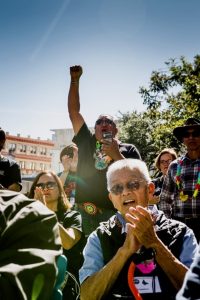 Author’s Bio:  Sita Kuratomi Bhaumik is an artist, writer, and educator who uses art as a strategy to connect memory and history with the urgent social issues of our time. Her work focuses on decolonization, the hierarchy of the senses, and the impact of migration. Raised in Los Angeles, Tongva Land, and based in Oakland, Ohlone Land, she is Indian and Japanese Colombian American. Sita holds a B.A. in Studio Art from Scripps College, an M.F.A. in interdisciplinary art and an M.A. in Visual and Critical Studies from California College of the Arts.

All the photos in this article were by Sita Kuratomi Bhaumik.

To learn more about her work, visit sitabhaumik.com.