The following article by Susie Ling tells the story of friendship across racial lines and the strong bonds forged through compassion and kindness. The original version of this story appeared in the Monrovia Weekly and has been expanded for East Wind Ezine.

Barbara Jean Marshall Williams, a 93-year old African American, was born and raised on Westmoreland Avenue in “J-Flats”, a Japanese American enclave between East Hollywood and Silver Lake. Colleen “Teeny” Kunitomi Miyano said, “Cheryl, [Karen] Kiwi, and Clinton Burch of the Marshall-Burch family attended Dayton Heights Elementary with me in the 1950s; I used to wonder why an African American family lived in the center of J-Flats.” Teeny came to realize that this African American family “was here first.”  Barbara Jean’s grandparents, Josephine and George Albright, homesteaded this area as early as 1892. Josephine Hardy (1851-1943) was a White woman born in Groveland, Massachusetts and married to George Washington Albright, a former slave born in Texas. Their children, Roy, Crystal, and Wendell (1890-1959), were listed as “mulatto” in the census. By the early 1900s, the Albright family would welcome Japanese American neighbors that started to settle into this farming community. Crystal married Rufus Marshall in 1921.

Barbara Jean said, “Your neighbor was your neighbor” and she remembers her grandmother sitting amicably on the front porch with the Issei women although they didn’t communicate with language. Barbara Jean said, “We were all extended family. We even had a koi pond.” She continued, “There was a lot of food passed over the hedges. My parents were caterers.” Sansei Joann Kakiba Asao, piped in, “My grandparents lived next door to the Marshalls and my grandfather, Torakichi, was a baker for Dolly Madison. He used to make the best butter muffins and we just can’t duplicate it.” The Marshalls’ other neighbor were also foodies; the Hoshizakis ran the legendary community hub, Fujiya Market. 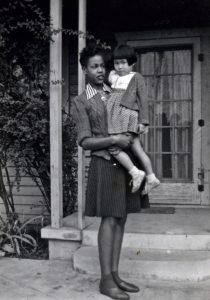 Dayton Heights Elementary School on Westmoreland Avenue, just south of Melrose Avenue, was established in 1910. Fujiya Market on Virgil Avenue was founded by Keijiro Hoshizaki in 1932, and closed 80 years later. The Hollywood judo dojo on Middlebury Street was established in 1932 by Issei. The community had family homes and rooming houses for Issei bachelors. Many of the Japanese Americans then were service workers for richer families in the Los Feliz area.

Barbara Jean continued, “When I was a teenager, my mother encouraged me to attend Japanese language gakuen with all our neighbors. But the war came along and the president at the time changed everything. My household was disrupted as my neighbors’ households were disrupted. It was traumatic and heart wrenching.”

Barbara Jean said that on the day the Japanese Americans had to congregate to report to assembly centers, there was dismal rain. “I remember Mama cooking and cooking. She made biscuits, eggs, and coffee for all the Japanese families. It was their last decent meal. And Dad drove the families in batches to the meeting place. In 1942, Torakichi and Katsuyo Kakiba had four children aged 17, 15, 13, and 11. Keijiro and Nami Hoshizaki had children aged 16 (Takashi), 14, 11, 9, 7, and 4. They all were imprisoned at Heart Mountain, Wyoming.

Dr. Takashi Hoshizaki remembers the Marshalls making the best apple pies with puffed up crusts. The Marshalls brought the pies – and ice cream – to their friends at the Santa Anita Assembly Center. They also brought chicken pot pies. Kiwi Burch added, “My grandparents were given power of attorney to protect property and bank assets of the Japanese Americans.”

Joann Kakiba Asao said between tears, “The Marshalls stored our trunk. After the war, my family would always show me the kimonos with their mon, their shamisen, and their Japanese dolls that had been saved.” Joann’s grandmother had been a seamstress and her aunts practiced Japanese dances. The Marshalls stored belongings for other Japanese Americans in their garage.

Eric Lewis, Barbara Jean’s son, said, “More recently, I drove my mother up Route 395 to visit Manzanar. But my mother couldn’t even get out of the car. She just cried and cried to see how desolate the camp surroundings were.” 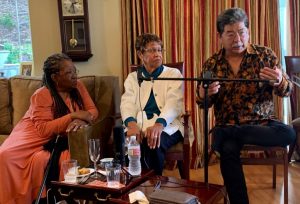 The J-Flats moniker was actually adopted after World War II. Jim Matsuoka explains, “In the 1940s, Mexican American gangs included First Street Flats and Fourth Flats – also known as Primera and Cuatro Flats.” The Boyle Heights’ Aliso Village projects – home of these gangs – was built on an earlier settlement of wooden shacks and makeshift shelters called Russian Flats. J-Flats was the territory of the Japanese American Black Juans gang. Boundaries were Melrose to Vermont to Hollywood Freeway to Virgil. Matsuoka continued, “Neighborhood boys – usually of color – that didn’t do well at Belmont High were then sent to so-called ‘opportunity’ manual arts boys’ schools like Andrew Jackson High in Boyle Heights or Jacob Riis High on 69th Street. These schools were notorious for gang activity.”

By the 1970s, Fair Play Committee member, Frank Emi, was teaching judo at the dojo. June Tani and Wayne Kohatsu worked at Fujiya, making their own Chinese chicken salad, The neighborhood changed with more Filipinos, Koreans, and Latinx immigrants moving into J-Flats.

Today, the J-Flats community is adopting a new name of “Virgil Village” and more associated with avocado toast and gentrification. But hopefully, the community will always feel the seeds of warmth and neighborly love planted by the Albright-Marshall family so many years ago.

I was born in Taiwan, raised in the Philippines, and now live in the San Gabriel Valley. Professionally, I’m Associate Professor of History and Asian American Studies at Pasadena City College in California. I volunteer for the Chinese Historical Society of Southern California (www.chssc.org), the Monrovia Latino Heritage Society (MLHS), and the Monrovia Historic Preservation Group (www.mohpg.org).