East Wind ezine is proud to present another short story by Charlie Chin.

My phone buzzed to tell me that I had a call.  I checked the name and knew it was urgent.  I punched the number for Dr. Ira Baumberg, the Director of the Identity Crisis Center at Beth Shalom Hospital, San Francisco.  It made sense. The Jewish community had a lot of experience with this issue.  Ira and I had been roommates at NYU back in the 90’s and we tried to stay in touch over the decades.  He picked up after one ring, cleared his throat softly, and then Ira began.

“I got one for you Charlie.”

“What’s the situation?”   Ira cut right to the chase.

“Adult male, he was found wandering around the front of Macy’s in Union Square just about 60 minutes ago.  He looked disoriented and when a concerned cop asked him if he was O.K., the patient panicked.  He started screaming that he couldn’t see his reflection in the storefront windows.  Luckily the cop brought him to us instead of the drunk tank.  The patient has no I.D. on him. I gave him a sedative and he’s able to see himself in the mirror again, but that’s about it.  He can’t remember his name or where he lives.” 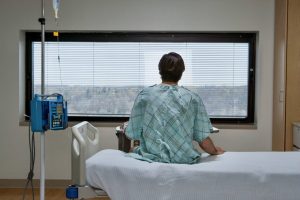 “Oh yeah, my instincts tell me he is.  He doesn’t have an accent but when they brought him in, he was muttering that he had to get to Costco.”

“O.K. I’ll be right there.”   I had an Uber pick me up and drive over to the hospital.  As the car ricocheted uptown, the driver, a Mr. Husain Ali, and I had an interesting talk about Islam.  Before I knew it, I was there.

Ira was waiting outside the hospital by the parking lot.  He led me inside and waved off the receptionist’s questions.  This was an emergency.

“If you get to them before the syndrome gets locked in place, you have a chance for recovery. If not, well sometimes it lasted for years, maybe decades.  You know, you’ve seen it.”

The guy was in the bathroom of the examination room.  He was inspecting his reflection in the mirror carefully as if seeing it for the first time.  Ira cleared his throat and the guy turned to face us.  The man was Asian, about 45.  He had on a pair of expensive sneakers and a sweatshirt that said, “Real men do Yoga.”  Ira sat him down and introduced me.

“This is Charlie Chin.  He’s going to see if he can help you remember.  I’m going to leave you two alone for a while.”   Ira stood up, gave me a wink, and left the room.  I took a good look at the patient.  He was nervous and scared.  Who wouldn’t be?  I began at the beginning.

Some of them resisted but he seemed like he wanted help.  I explained the situation to him.

“John, what you’re going through may seem a little frightening, but it happens to a lot of people. I’m going to ask you some questions and I would like you to say the first thing that comes to your mind.”  He leaned forward and nodded vigorously.  And so, we started.

“John, you were just peering into the mirror, why?” “I was surprised, I didn’t expect to see…”  I answered for him.

“You didn’t expect to see an Asian, right?  You assumed you were a White man.”  He pressed his lips together and nodded.  I didn’t want to panic him, so I started slowly.

“O.K. What is Jeremy Lin’s greatest accomplishment?”   Without a second of hesitation his knee jerk reaction was “He got his degree and finished Harvard.”   Good, that was the correct Asian American answer.  He was still within reach.  I just had to be gentle.

“John, which one of these Asian American Actresses has won an Academy award for Best Actress?  Lucy Liu, Awkwafina, or Ming Na?”

“John, it was a trick question. No Asian American Actress has ever won the Academy Best Actress Award.  But you would know that if you were involved in performance, film, or theater.

He took it philosophically, “Well at least that’s something.  Ask me another question.”  I spoke slowly,  “You’re in a restaurant with a table of four.  The bill comes, what is the correct tip?”

Well, he wasn’t a doctor, a dentist, or a university professor.   Everybody knows they all tip very badly, if at all.

Without dropping a beat he replied in a mechanical tone, “It’s only a crime to lie when you’re under oath.”   Mmmm, he’s a lawyer, no doubt about it.  We were making progress. I fired another question at him.

“Who was the greatest boxer of all time?”  It wasn’t his area of interest, so he had to stop and think for a minute.  He brightened up and ventured, “Mohammed Ali?”

A Pinoy would have said, “Pacheo,”  For them there is no other boxer of importance, so he wasn’t Filipino.

“A week’s worth Kim Chee for a family of four is:  A) a pint, or B) a gallon?”  He closed his eyes and whispered, “I don’t know.  Maybe a pint?”  We could rule out him being a Korean.  I tried another angle.

“What would you charge for a Mani, Pedi, hot stone massage, and a facial combined?”

He went blank and said,  “I have no idea.”  That eliminated most of the South East Asian Groups.  I tried a different tack.

“The condiment for fish is…?”  He stroked his chin thoughtfully and suggested, “Soy Sauce?”  I was hoping for more detail.  If he had said, “Si Yeow,” or “Sho Yu,” we could have narrowed it down to Cantonese or Japanese.

I asked quickly, “What is Lechon?”  He seemed mystified and then his face brightened,

“That’s what the Spanish speaking customers called the roast pig we sold in my father’s store.”  Aha!  The chances were high that he was Chinese.  Now I had to find out what kind.

“John, what is the yearly property tax on an apartment building that contains 12 apartments and a parking garage in Millbrae, California ?”

Well for sure, he wasn’t Taiwanese.  I went in another direction. 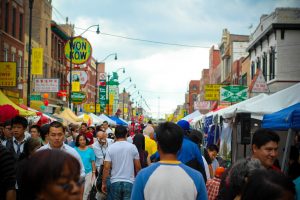 “What is the average number of guests at a wedding banquet?” He smiled as if remembering something and whispered, “Three to five hundred people.”  That nailed it.  He was Cantonese, and now for the personal stuff.

“If you had to be at a formal social gathering at eight o’clock PM and it took 30 minutes to drive there from your house, what time should you plan to be walking out the door to get there on time?”  He shrugged and said in an off-handed way, “Six thirty?”

Bingo! He was married.  Let’s face it, you can be married or you can be on time, but you can’t be both.  I followed up on that angle.

“How many times a year does a woman change her hair color?’

“Hmm, about twice?”  He was mostly likely married to a non-Asian.   Except for that blond highlights business when they get bored after they’re married, Asian American women just dye their hair black when the grey starts to show.  We were getting closer with each question.

“What is a receiving blanket?”  He shouted, ”That’s the little blanket that they put the babies in!”  He was getting more and more excited as things started to come back to him.

“What is the perfect number of children to have?  He surprised a whoop and shouted, “Two point five.”  No doubt now.  He was second, maybe third generation.  It was time to slam the hammer down.

“John, when you go skiing up near Tahoe, who goes with you?”  It all came back in a rush.  And he started to cry.  He buried his face in his hands and between his fingers he moaned, “My wife Brittany, and the kids, Dakota and Joshua.  My God, How could I forget who I was?”

I tried to ease the tension,

“Don’t feel bad.  Sometimes it’s so subtle you don’t notice until it’s almost too late.  It could happen to any of us.”  He stood up and gave me a teary-eyed bear hug.

Ira walked in on us and smiled.  It was obvious what had happened.  Ira extended his hand to John and asked, “How do you do?  Mr….?”  The man grabbed Ira’s hand and pumped it vigorously. “Chang, yes that’s my name, Harold Chang.  I’m Harold Chang.”  He laughed and repeated the name as if he were afraid he would forget it.

A few minutes later, Harold borrowed a cell phone and was calling a worried wife in Walnut Creek and filling out a hospital form.  Ira walked me back to the emergency entrance to say good-bye   As we stood there shaking hands an ambulance screamed into the parking lot and a couple of paramedics pulled a gurney out of the back.   Strapped on to it was a young Asian girl wearing two nose rings, a flat top haircut dyed green, and a tee shirt that said, “Booze, Shoes, and Boys with Tattoos.”    The girl was screaming at the top of her lungs.

“Please help me.  I can’t see my hands.  My hands have disappeared.  I’m becoming invisible.”

Ira turned to me with an apology in his eyes.

“Charlie, I know it’s a lot to ask of you.”  I smiled and said,  “Just give me enough time to get a cup of coffee and I’ll meet you in the sitting room.”

Author’s bio: Charlie Chin is an author, singer/songwriter, and master storyteller. He served as the Community Education Director at the Museum of Chinese in America in New York City and as Artist-in-Residence at the Chinese Historical Society of America in San Francisco. He is the author of several children’s books, including China’s Bravest Girl (1992) and Clever Bird (1996). 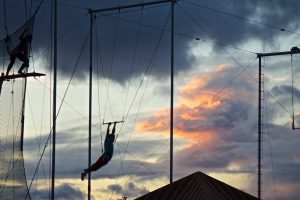