East Wind ezine wishes to thank Topic.com and writer Jaeah J. Lee for allowing us to link to her article about Gidra, the groundbreaking Asian American community newspaper that debuted in April 1969 in Los Angeles.  The article appeared online at Topic.com earlier this year.

I asked Mike Murase, who is featured prominently in the article, to provide an introduction to this re-posting.  He writes the following:

Jaeah Lee, a freelance journalist based in San Francisco, initially contacted me back in January 2017. Over a period of several months, we corresponded by email and talked on the phone several times before she wrote this story. She told me that she “had never heard of GIDRA” and upon coming across it, she “felt a sense of astonishment” because the content and tone of our publication from almost 50 years ago resonated with her. 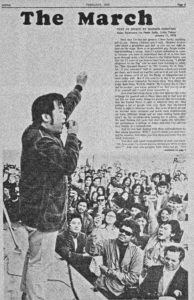 In the past several years, I had encountered other people—professors, students, journalists, activists and others—who “discovered” GIDRA and reacted in a similar manner. It was gratifying to hear that they found GIDRA fascinating and in many ways still relevant to what is going on today. At the time we wrote for and produced and distributed the paper, none of us really thought that it would have the enduring impact that GIDRA has had.

Although a lot of changes have taken place in the last 50 years, and specific conditions are different now than they were in the late 60s and 70s, our yearning to find our own voice, our sense of justice, and our desire to build a better tomorrow have not changed. In a short period of five years, hundreds of people, mostly young, contributed to GIDRA, and thousands more across the country were impacted by it. 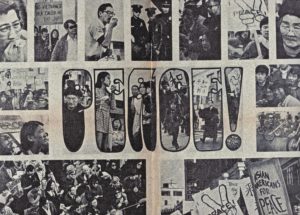 Today, we are living in unimaginable turmoil. It will take many people—young and old—to step up to find our voices again and speak out against white supremacy, racism and social injustice.

All of the issues of Gidra have been digitized by Densho and are available at http://ddr.densho.org/ddr-densho-297/.

We also wish to thank Jaeah J. Lee for speaking with us about the article and providing us with this short bio.

Jaeah Lee is a magazine journalist in San Francisco and an inaugural recipient of the American Mosaic Journalism Prize. She has written for publications including The California Sunday Magazine, Mother Jones, Topic, Vice News, and Pop-Up Magazine. She has served on the board of the Asian American Journalists Association’s Bay Area chapter since 2017, and helped launch its new live storytelling event, Hella Asian.

And now without further ado, here is the article:

Editor’s note:  The cover image for this article is a drawing by Ray Tasaki on the February 1971 issue of Gidra.