This will be a very strange, pandemic-fied Thanksgiving.  Gathering of one’s social bubble and perhaps one other non-related bubble (one with negative coronavirus tests) is the  recommended protocol. It’s certainly not the festive family and friends gatherings we’ve held in the past. And we will pause to mourn the loss of 1.3 million people due to Covid-19 across the globe.

Still, we have much for which to be thankful, not the least of which is the dismissal of the mass murderer in the White House. My sentiments are not shared by at least 72 million people who voted for Trump, but we shouldn’t dance around the horrific truth that Trump knew how dangerous the coronavirus was and chose to deflect responsibility, deny federal aid, and denigrate anyone who disagreed with him. Losing the presidency is the least of what he deserves in terms of punishment.

As the Thanksgiving holiday approaches, the oft-told stories of Native peoples helping the pilgrims are trotted out gilding over the horrors of Native genocide and theft of Native lands by white religious zealots. How appropriate then for The New Yorker (Nov. 2, 2020) to publish Dakota historian Philip Deloria’s article “What Tecumseh Fought For”, a riveting account of the Shawnee leader’s attempt to unite Native tribes to resist the murder of their people and the appropriation of their lands.  Many people  got “woke” this year by the murder of George Floyd, and this article serves to remind everyone that America’s growth not only came from enslaved labor but also from the enrichment of white people at the expense of Native peoples.

We can also take the opportunity to learn about contemporary Native issues via the Native Cinema Showcase presented by the Smithsonian’s National Museum of the American Indian.  This online film festival marks the 20th anniversary of NMAI’s presentation of Native film and video.  This year’s program, which runs from Nov. 18 to 27, includes 64 films (nine feature length docs and narratives plus 55 short works) representing 49 Native nations in 12 different countries.  You can find the full schedule Native Cinema Showcase.

Just go to the website and click on the films to view them at their show date or for five days after. Here are a few films that grabbed my attention. The descriptions are from the catalog.

In the Hamptons, one of the wealthiest zip codes in the U.S., hedge funders sell home compounds for millions of dollars. However, before the rise of lavish homes, golf courses, and exclusive parties, lies the history of the area’s original inhabitants—the Shinnecock Indian Nation. Without powerful advocates, the tribe has been edged off their land due to decades of rampant development, sparking a battle to define land as either a commodity or a birthright. Rebecca Hill-Genia, a Shinnecock activist, along with other tribal members and allies, makes it her mission to protect the land and fight for the tribe’s community, heritage, and home.

FOR MATURE AUDIENCES: CONTAINS SOME SCENES OF VIOLENCE

In August 2016, a farmer in rural Saskatchewan shot Colten Boushie, a 22-year-old Cree man. The acquittal of his killer captured international attention, raising questions about racism embedded in Canada’s legal system. Colten’s family was propelled onto national and international stages in their pursuit of justice. The film weaves a profound narrative encompassing the filmmaker’s own adoption, the stark history of colonialism, and a vision of a future where Indigenous children can live safely on their homelands.

In her award-winning documentary, director Alethea Arnaquq-Baril joins a new tech-savvy generation of Inuit as they campaign to challenge long-established negative perceptions of seal hunting. Armed with social media and their own sense of humor and justice, this group is bringing its own voice into the conversation and presenting themselves to the world as a modern people in dire need of a sustainable economy.

Poet, musician, orator, actor, activist, and American hero, John Trudell has been fearless in confronting the difficult realities of our history and culture. Trudell was a leader of the American Indian Movement and, more recently, one of rock-and-roll’s most distinctive talents. Filmmaker Heather Rae skillfully weaves together archival footage, impressionistic scenes, a deeply affecting soundtrack, and interviews with Kris Kristofferson, Robert Redford, Jackson Browne, and Gary Farmer, who calls Trudell “our Socrates.”

This short explores the issue of historical trauma created by the Native American boarding school experience.

The filmmaker’s personal story about disconnection, survival, and healing. 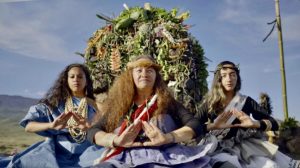 Follow Native Hawaiian mother-and-daughter activists as they take a stand to protect their sacred mountain, Mauna Kea, from becoming the site of the world’s largest telescope.

Sisters Rising is the story of six Native American women fighting to restore personal and tribal sovereignty in the face of ongoing sexual violence against Indigenous women in the United States. An urgent call to action, this portrait of powerful women acting in solidarity is a demand for tribal sovereignty and self-determination toward ending violence against Native women.

My last selection is a low-key narrative film with quietly moving performances. Enjoy.

Frankie and Irene, a 50-something once-upon-a-time couple, take a redemptive road trip across Oklahoma. As they take to the open road for Frankie’s last ride, the journey becomes one of shared memory, love, and forgiveness. Oklahoma-based actors Whitman and Camp-Horinek seem to melt into their roles and become at one with the dreamy landscape they travel. 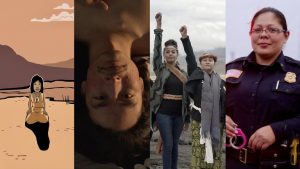