I always look forward to getting the e-newsletter from the Rev. Duncan Ryūken Williams, a Buddhist minister and Professor of Religion and East Asian Languages & Cultures and the Director of the USC Shinso Ito Center for Japanese Religions and Culture ,who is active in TSURU FOR SOLIDARITY.  Although I am not a Buddhist, I am drawn to the values that Buddhism and other religions promote, e.g. compassion, selflessness, contemplation and enlightenment. I also embrace the practice of non-attachment to material things and meditation and the “emptying of the mind.” Amid all the chaos and anxiety in the age of coronavirus, many people are finding sustenance through a spiritual path that co-exists with the urgent need for social justice. At this moment to be an enlightened human entails acknowledging the inequality and suffering of racism that has cruelly exacted a toll on people of color and working people who are on the frontlines in the essential industries: health care, food production, food distribution, public safety, social services, and more. Indeed, the pandemic teaches us about shared fate as the disease spreads throughout the world unabated.

Buddhist ministers have participated in many social justice events from rallies in front of the ICE headquarters and detention facilities to marches in protest of the killing of George Floyd.  Scholars and writers have called these calls to action Engaged Buddhism. “Buddhism is primarily a contemplative religion,” wrote Associate Professor Colin Butler, Australian University.  “Nevertheless, from its earliest times there has been a strong social justice ethic, born from the fundamental principle of compassionate action. According to the Buddha, as human beings we make choices (karma) that have consequences. If these choices are informed by wisdom and compassion, the outcome will be happiness; if they are informed by greed, hatred, and delusion, the outcome will be suffering. In the sphere of social justice the Buddha pointed out that, while it is normal for people to want to experience the pleasures of life, when greed becomes excessive it creates conflict. This conflict is rooted in the reality of limited resources: the earth is generous and abundant, but can only supply so much. When some decide to take for themselves beyond what is reasonable, others go without.”

The concept of compassionate action was embraced by Vietnamese Buddhist monk Thich Nhat Hanh, who coined the phrase “Engaged Buddhism.” Thich Nhat Hanh came to the U.S. in 1961 to teach comparative religion at Princeton University and later at Columbia University. He met with Dr. Martin Luther King, Jr. in 1966 to urge King to opposed the Vietnam War.

Thich Nhat Hanh’s new translation of  the Heart Sutra, which is frequently chanted at Buddhist ceremonies, encapsulates the path to enlightenment.

Rev. Duncan Ryūken Williams follows the path of Engaged Buddhism. He recently shared a video and message about a Buddhist ceremony held in Los Angeles on June 6, 2020.

You may recall from earlier newsletters that before Covid 19 became a widespread public health threat, I was working in collaboration with Tsuru for Solidarity to help plan a “National Pilgrimage to Close the Camps,” where Japanese American community members from across the country would assemble in Washington DC with 125,000 paper cranes, or tsuru, as expressions of solidarity with immigrant and refugee communities that are under attack today through policies like ICE detention, separation of parents, families, and children, and the travel ban that has targeted Muslims.

Knowing that a large public gathering was impossible at this time, we re-envisioned the event as an online program of education and protest, accompanied by a remembrance ceremony held at Higashi Honganji Buddhist temple in downtown Los Angeles on June 6, 2020 with an audience limited to Buddhist clergy. In this ceremony, we recalled the names of Japanese Americans incarcerated during WWII with those who have in more recent times experienced indefinite incarceration, family separation, and unjust deportation at the southern border and ICE detention facilities; those who have experienced COVID-19 anti-Asian racism; and those who have experienced anti-Black police violence.

At this ceremony, I delivered the Dharma Message and joined in chanting the Sanseige, the Heart Sutra, and the Dedication Verse, then recited the names of sixteen people who have passed before us, as both a remembrance and a protest to these unfathomable loss of their lives at the hands of enduring and systemic racism.

June 2019 – El Salvadoran 23 month old, drowned in the Rio Grandé with her father during a border crossing 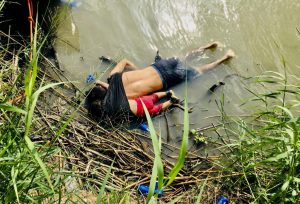 Óscar Alberto Martínez Ramírez, 25, and his 23-month-old daughter, Angie Valeria, drowned during the family’s attempt to cross the Rio Grande from Mexico to the United States.Credit: Julia Le Duc/Associated Press

December 1941 – the 42 year Mexican national of Japanese heritage rounded up by U.S. security agencies immediately after Pearl Harbor, confined at Tuna Canyon Detention Station (CA), and then deported to Mexicali 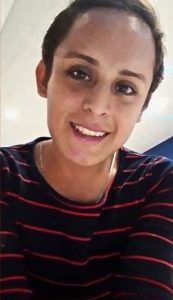 April 1943 – 65 year old Japanese cook shot by a military police sentry whilst taking a walk parallel to the fence at the WRA Camp Topaz, Utah

February 2020 – 25 year old unarmed Black man shot by vigilantes in a pickup truck whilst jogging in his neighborhood in Glynn County, GA

December 1943 – A 33 year old Japanese confined in a prison within a prison; enduring a hunger strike within the Tule Lake Stockade to protest food shortages and the brutal treatment of community leaders in the Tule Lake concentration camp, CA

March 2020 – 30 year old immigrant from El Salvador who endured a hunger-strike within the ICE detention facility in Hudson County, New Jersey, demanding toilet paper and soap for immigrant detainees to protect themselves from the COVID-19 virus 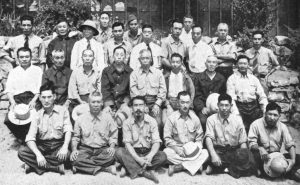 Japanese and Japanese Americans imprisoned at the Dept. of Justice camp at Lordsburg, New Mexico.

July 1942 – 59 year old fisherman forcibly removed from his home in San Pedro, California shot by a U.S. Army guard. Accused of trying to escape the US Army Camp Lordsburg, NM despite being physically disabled and barely able to walk.

March 2020 – 26 year old African American EMT (emergency medical technician), killed in her own bed at her Louisville, KY apartment by police officers who had stormed in without knocking or identifying themselves striking her with at least eight shots 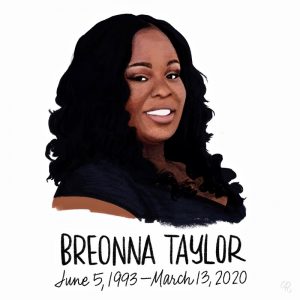 March 2020 – A Burmese American father attacked and stabbed in a Sam’s Club in Midland, TX by a man claiming that Chinese-looking people were spreading the COVID-19 virus

May 1942 – 58 year old Japanese store owner shot by guards in the back of the neck at the fence at the Fort Sill Internment Camp in Oklahoma – leaving behind his wife and 11 children in Kona, Hawaii

May 2020 – an unarmed 46 year old Black man and father of five children, killed by a knee of a police officer on his neck for 8 minutes 46 seconds; his last words “Mama’, “Please”, and “I Can’t Breathe”

June 2020 – 46 year old Black business owner in Louisville, KY, shot and killed by police during a protest centered on the deaths at the hands of police officers of Breonna Taylor and George Floyd. 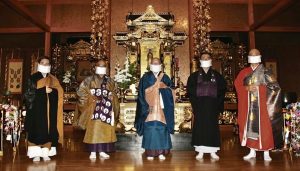 I’m going to let the video of the ceremony by Evan Kodani take you out on a contemplative note. Many thanks to Rev. Williams for organizing the Buddhist Ceremony for Tsuru Rising at Higashi Honganji in Los Angeles. 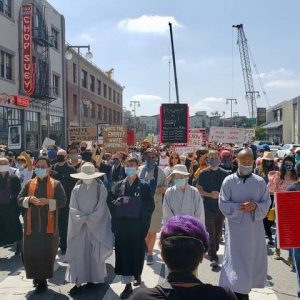 June 13, 2020. Great Awakening Walk: Buddhists for Black Lives. I joined a group of Buddhist clergy and other leaders on a slow, silent marching meditation called the “Great Awakening Walk” from the Japanese American National Museum to the Los Angeles City Hall. Glad to have joined this walking meditation organized by Chinese, Vietnamese, and Korean monastics associated with the University of the West, a Buddhist seminary in Rosemead, CA. Photo courtesy of Rev. Duncan Rūyken Williams.

Rev. Williams is the author of American Sutra: A Story of Faith and Freedom in the Second World War  available via Amazon. 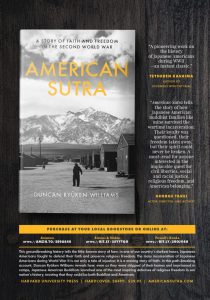