I’m pleased that my friend Chung Hoang Chuong has allowed East Wind Ezine to repost his essay from VNExpress (Jan. 3, 2020 edition) about the dangers facing the Mekong River.  If you’ve had the opportunity to visit Vietnam and spend some time in the Mekong Delta, you’ll come away from it as I did with a deep appreciation for the farmers, fisher people and shopkeepers in this bustling, yet struggling region. The region’s natural beauty has been safeguarded by generations, but climate change and the rising sea waters plus the damming of the waters in the upper Mekong are causing grave hardships.  Several points in the article include hot links to deeper explanations of the situation.  Please read these links.  Thank you, Chuong for the article and your beautiful photographs. 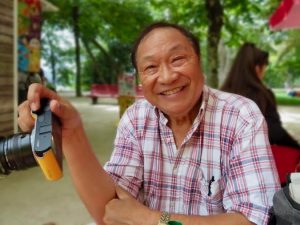 I was born in Tien Giang, but did not know anything about where I was born, until I came back after 50 years of living abroad.

In 2008, when I was teaching in the United States, I received a faculty research program. Every six years of teaching, teachers will be given six months or a full year off to improve their knowledge through research projects. I was funded research on the Mekong basin culture and issues related to geopolitics of Southeast Asia. 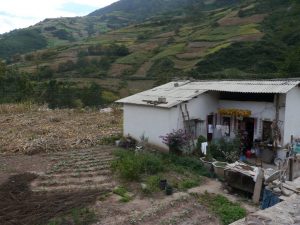 Near Weixi, in Yunnan, and you could see the Mekong behind this farm house, I was going up to the Xiao Wan dam (Tiểu Loan) which was the highest dam in Asia. Of course it was not the only one blocking the main Lancang Jiang (Mekong) but one among a dozen in staircase arrangement. I talked to displaced farmers and people affected by the project as well as dissidents who went to jail. This enhance I my commitment to a free flowing Mekong. (From Chung’s Facebook post.)

Within six months, field trips along the Mekong brought me through Yunnan, the autonomous region of West Song Ban Nap,  Laos, the Golden Triangle, Thailand, Cambodia, the tributaries of the Mekong such as Serepok, Sekong and Sesan, to observe many tributaries across the Mekong Delta. These trips have given me an authentic view of the river as well as the natives.

Mekong is the longest flow in Southeast Asia, passing through six countries, Vietnam at the end of the source. The river has the second most biodiversity in the world, just behind the Amazon. But the river is being abused, the water is blocked upstream. Giant dams have turned the Mekong into a series of hundreds of kilometers of lakes in Yunnan, China. After that, Laos cooperated with China and Thailand to build more dams on the mainstream, on the way to turn into a battery to produce electricity for the whole region.

Since 2015, after retiring from the University of San Francisco and retiring, I have continued to study the watershed of this river. I collaborate with Ho Chi Minh City University of Social Sciences and Humanities as a researcher. The most precious joy for me is to go to a province, district or commune every week, learn indigenous concepts, understand more about the culture and history of my birthplace. 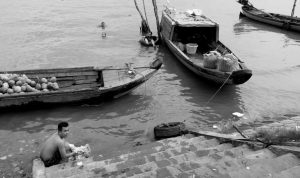 My river scene with the afternoon activities including taking a swim or giving your poodle a wash. Then a procession with a monk leaving shore to spread the ashes and it is the Mekong where it is being shared and used by more than 60 million people. It is always a joy to just sit there and watch the river. (From Chung’s Facebook post.)

For a few weeks now, I have met organizations and experts attached to the plains. They talked about the land being saline intrusion , the economic loss could be higher than the previous year, the water source was degraded, causing landslides, water shortages and crops at risk of failure. Research institutes such as Lowy, Mekong Commons, International Rivers and the Mekong River Commission all issue warnings, call for water savings or proposals to change farming practices so that we can apply them as adaptation. If drought, saltwater intrusion, subsidence continued, the economy continues to be plain, serious threat. As a result, the majority of the local people have been searching for a living elsewhere.

By living experience and existing challenges, I think we can think of a plan with three visions: short, medium and long term.

In Con Chim, Hoa Minh hamlet, Tra Vinh province, we are supporting farmers in the project “The shrimp hug the rice”. With support from local authorities, a team of experts cooperates with farmers on an islet. If climate change and the amount of water from upstream are not guaranteed, experts offer a flexible model. If the water is saline and brackish, the farmers will switch to shrimp farming; if the source of fresh water is adequate, rice will replace shrimp. Farmers will be equipped with knowledge to enter the tourism industry, providing visitors with regional specialties, experiencing cooking, crab fishing or baking with a zero-waste recommendation. The combination of agriculture with green tourism and a slow start has brought very satisfactory results to the households living on this islet. I think the model can be applied to the whole delta. 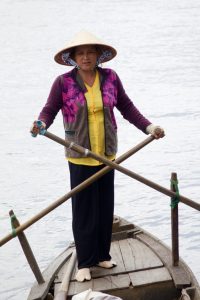 River guide on the Mekong River. Photo by Eddie Wong

Second, in the medium-term strategy, from three to 10 years, I think a Mekong Research Center for Vietnam is key. This field of science will partner with Southeast Asian universities and the world, training experts who are knowledgeable and knowledgeable about the Mekong basin in a sustainable development model, proposing action to the Government.

Thirdly, looking beyond that, for a vision of more than 10 years, starting now, efforts to come to an Agreement of Conduct for the entire basin with six countries sharing the same water as the Exploitation Agreement and developing the Rhine basin in Europe is the key to the problem. 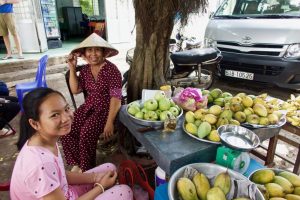 A family sells fruits and vegetables in the Mekong Delta. Photo by Eddie Wong

And above all, we all know that the most important cause of the current difficulties for the delta is due to the greedy and selfish upstream dams . Many still exhort that communities in the Mekong basin drink the same water. But talking is not enough. If the people who represent our country do not dare to speak out strongly and act together to call for and promote the creation of an international agreement respected by foresight and scientific knowledge, then no Who saved the plain. If we do not create a consistent and civilized principle of conduct, will there still be a common stream that will drink forever?

Author’s Note:  Chung Hoang Chuong has been a leader in developing Southeast Asian studies starting in 1981 at U.C. Berkeley and later teaching for several decades as a Professor of Asian American Studies at the City College of San Francisco. He is also an accomplished photographer who completed his Masters of Fine Arts at Lone Mountain College. He currently lives in Vietnam. 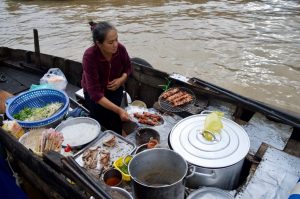 Could we sustain this river culture? Thousands depend on it. (story cover photo by Chung from Facebook post.)