Story by Grace Morizawa and Video by Alan Kondo.

On Sunday November 3 2019 the nearly 200 pilgrims who had attended the first official Crystal City pilgrimage, Hidden History–Justice Denied began returning home from the four-day pilgrimage. They had come from as far away points as Hawaii, Indiana, and Washington DC to renew friendships and memories with other former internees, to honor their ancestors, and to learn the story of the Crystal City Family Detention Camp.  The highlight of the pilgrimage was a daylong visit to the former Crystal City site. Throughout the pilgrimage they heard eyewitness stories that unveiled the truth; stories of U.S. government surveillance in the U.S. and 18 Latin Americans; stories about the disappearance of their fathers or mothers, community leaders in the U.S.; and the kidnapping of community leaders in Latin America.  The overwhelming story was that of family separation with parallels to today’s border crisis. Pilgrims got a chance to publicly stand up for justice at a community rally supporting immigrant rights Sunday morning in San Antonio’s Travis Park where Hiroshi Shimizu urged, “Stop repeating history, never again is now!”

The program featured former internees telling their stories of imprisonment, displacement, and injustice.  Crystal City Family Detention Center was unique World War II-era  U.S. department of Justice system of imprisonment of noncitizen people of Japanese, German, and Italian descent. First imprisoned as “potential dangerous” these noncitizens were held in little-known U. S. Department of Justice sites throughout the country. Later the Department of Justice internees were offered the chance to reunify with their families in Crystal City Family Detention Center located 100 miles south of San Antonio, Texas.  The U.S. families voluntarily agreed to imprisonment in Crystal City (from American concentration camps) thus increasing the possibility of prisoner exchange and deportation despite their American citizenship. Between 1942 and 1948, Crystal City held dozens of Buddhist priests, hundreds of community leaders, and thousands of German and Japanese origin families, the majority of whom were Japanese Latin American families who had been explicitly extradited from 18 countries as part of a prisoner of war exchange program.

Imprisoned there,  the internees formed deep bonds and everlasting memories. Pilgrimage co-chairs, Kaz Naganuma who was kidnapped from Peru and Hiroshi Shimizu who was incarcerated in Tule Lake shared that their friendship began when then were 3 and 4  in Crystal City.   Sab Fukuda accounted how his father Reverend Yoshiaki Fukuda from the San Francisco Konko Church had worked with lawyer Wayne Collins to gain a path to citizenship for the Japanese Latin Americans. Later Fukuda’s church sponsored resettlement for over 60 Japanese Latin Americans in San Francisco. Reverend Fukuda and Wayne Collins were recognized for their efforts by the Crystal City Pilgrimage.

Sab’s story began his witnessing the terrifying arrest of his father.

On the night on December 7 after the attack on Pearl Harbor my father was arrested while giving a sermon in San Jose.  Right in the middle of his speech three large FBI men came in arrested him and handcuffed him.  I was 7 years old, confused, frightened and not knowing what was going on.

Sab Fukuda did not see his father until they were reunified in Crystal City in February of 1944.

Libia Yamamoto also spoke passionately and from the heart on the theme of family separation at the Sunday Rally. Born in Peru, she begins in her first language.

Buenos Dias. My father was kidnapped in 1942.  We said good-bye to him not knowing where he was being taken or if we would ever see him again. It was a very, very traumatic day for me. I remember it so vividly. Lately when I hear about the immigrants, the children getting separated from their parents, I feel so bad for them. I remember how I felt, and I feel for the children. I feel for them and I pray for them. I pray for the leaders that put them there. I think that Trump must not know what it means to have a family or a close family to be able to separate the families like that.  He must not know the love that exists in families, and I feel sorry for him. I pray for him.  I pray that he will someday realize what wrong he is doing.  I think he should search his heart.  I continue to pray for the children and families.

Crystal City officials greeted the pilgrims with open arms, smiling and assisting pilgrims as they disembarked the buses to participate in a memorial service at the site of the former swimming pool/irrigation reservoir built by the internees.  Now abandoned and surrounded by rough terrain, the city had made the trek easier for the pilgrims by paving a path to the pool.  Stan Shikuda opened the service, “It really warms our heart that we came here 75 years ago involuntarily as prisoners, and we return today as friends and comrades with a bigger vision and a better America.”  Thus under the Texas sun and big sky, the visit to Crystal City began.  Reverends Duncan Williams and Ron Kobata chanted sutras as pilgrims and towns people offered white carnations and incense for those who had passed away in the detention center and to remember the strength and resilience of the internees. Mayor Frank Moreno Jr.  embraced the pilgrims with words of empathy and shared understanding of oppression, resilience, and activism.  Throughout the day buses toured the historic markers including the sites of the former Japanese and German schools, and the entrance to the camp.  When the pilgrims stopped for lunch at high school, they walked into an atrium filled with a hundreds of photographs of the internment camp put together by the high school students.  Ninety-four year old Kate Asa excitedly pointed herself out in a photo of the 1945 high school graduating class. Others guided Trudy Werner, a former German internee to a photo of her father performing in an Oompah band. Karissa Tom, a fifth  generation Japanese American, stood next to photo of her great-great-grandfather George Uno, a Japanese school teacher and leader of the Japanese internees and spoke about the need to work in solidarity to make a better world.  Tom was one of four generations of the Uno family in the pilgrimage. 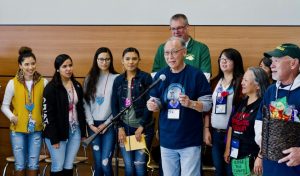 When the pilgrims returned home, they felt a great sense of community.  One pilgrim said a week after his return that the program sparked many conversations that went deep and profoundly touched him. He is still processing the themes and emotions of the hidden histories revealed in the pilgrimage.

To learn more about the Crystal City Detention Facility, visit:

To learn more about the Crystal City Pilgrimage, visit our Facebook page @crystalcitypilgrimageco 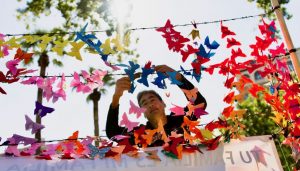 Cover Photo: Hanging butterflies, a symbol of the right to migrate, at the November 3 Solidarity Rally for Immigrant Justice at Travis Park, San Antonio, TX. Photo by Sita Bhaumik.

Author’s Bio: Grace Morizawa is a poet and the Education Coordinator for the National Japanese American Historical Society.  She lives in Berkeley.

The following video of the Crystal City Pilgrimage is a rough cut by filmmaker Alan Kondo. This footage will be incorporated in a documentary about Japanese Americans and today’s movement to remember the incarceration and resist unjust immigration policies such as family separation and the detention of migrant children.