Editor’s Note: This article originally appeared in AsAm News on Nov. 11, 2020. We are reposting it with the permission of Randall Yip, editor/publisher of AsAm News. To see the article in its original form visit Public artist takes on anti-Asian racism in NYC subway station.  Although the subway station display is no longer available, Amanda Phingbodhipakkiya’s “I Still Believe in Our City” now appears on bus shelters throughout the  city and at LinkNYC kiosks.

A New York City artist is addressing anti-Asian racism in the most bold and vibrant fashion, and she is displaying her art where people won’t miss it — in the middle of a busy subway station in Brooklyn. Featuring portraits of Asian people and statements such as “I Am Not Your Scapegoat” and “This Is Our Home Too,” this public art series will include 45 unique pieces created by Amanda Phingbodhipakkiya, a former neuroscientist who is presently an artist in residence with the New York City Commission of Human Rights.

The“I Still Believe in Our City” art series will be on display until December 2nd at the Atlantic Avenue-Barclays Center subway station. Created in response to the surge in coronavirus-related racism across the country, it also includes portraits that support Black Lives Matter. 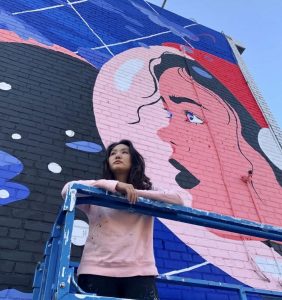 AsAmNews: Tell us about the “I Still Believe in Our City” public art series. What inspired it?

Phingbodhipakkiya: Growing up in Georgia, I experienced countless moments of anti-Asian bias. My dad is Thai and my mom is Indonesian, and several generations back, both their families were from China. There weren’t many people who looked like me growing up. I was such an anomaly that my physics teachers asked me “What color are you?” in front of our whole class, something I had no answer for at the time.

I moved to New York City so I could thrive and have called her home for the past 14 years. But the pandemic opened up an ugly side of the city. The President wasted no time using racial slurs to scapegoat an entire country and its diaspora. This, unsurprisingly, led to high numbers of discrimination, harassment, and violence toward Asian people in this country. The New York City Commission on Human Rights has recorded an eight-fold increase since last year. So many of my friends and people who look like me have been harassed, told to “go back,” spit on, set on fire and had our basic humanity denied. My goal with this art series was to turn these hurts into something beautiful and powerful. To show the strength, resilience, and defiance of Asian American communities.

This isn’t an anti-hate campaign or a PSA (public service announcement). It’s more than that. This is a celebration of everything Asian American people contribute to New York City, from working the frontlines as essential workers to building coalitions with the Black Lives Matter movement. I wanted to find a way to say, despite everything we have faced, as Asian Americans and New Yorkers, that I still believe in New York. I still believe in our city. 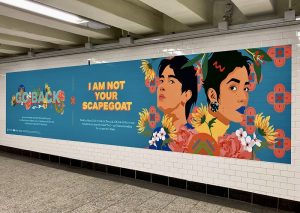 AsAmNews: Why do you feel that public art related to anti-Asian racism was important to create and display? How do you think this can help Asian Americans in this city?

Phingbodhipakkiya: Public art is widely accessible. You simply happen upon it as you go about your daily life, and that’s the beauty of it. It doesn’t sit behind gallery windows or an entrance fee. With this work, I was hoping to reach as many New Yorkers as possible. The New York City Commission on Human Rights was able to provide me with a record of all the anti-Asian bias incidents that have occurred throughout the city, and we strategically chose locations to display the work where these bias incidents have occurred.

We’re also placing this work in predominantly Asian neighborhoods to remind Asian American New Yorkers that we are strong, resilient, and still here, fighting every day for each other. Like other communities of color, Asian American issues are often invisible. So, the visibility of this art campaign is a statement, that we are reclaiming space, attention, and dignity. 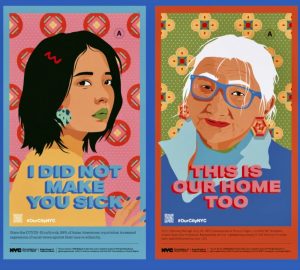 AsAmNews: Describe the types of pieces and portraits on display. What artistic and written elements did you include and why?

Phingbodhipakkiya: I hope this work stops people in their tracks. There are some provocative statements in there, and that was intentional. I want people to do a double-take and ask themselves, “What does that say?” I want this work to start conversations.

I chose to use bold colors for the series, inspired by the vibrant, tropical palette of Thailand, where my dad’s from. These blues, yellows, and pinks and the dynamic composition of the pieces draw in the viewers’ eye, where they can learn more of the story. For instance, I featured ugly words that have been hurled at people who look like us, words like “Go Back” and “Your Fault” and “You People” and engulfed them with flowers that have symbolic meaning: the peony for solidarity and friendship, the chrysanthemum for resilience and the hawthorn berry for longevity and protection. And when we take that juxtaposition of hate and beauty and bring in stories and historical context, like the Chinese Exclusion Act or statistics about Asian-owned businesses, we convey something important. That even though Asian American New Yorkers have faced hardship, have faced discrimination, and have been othered, we are still here, fighting every day for the city we call home.

Photo courtesy of the New York Commission on Human Rights.

AsAmNews: Your series includes portraits that support the Black Lives Matter movement. Why was it important to include these pieces?

Phingbodhipakkiya: I wanted this piece to stand up for the Black Lives Matter movement because Asian American and Black people share the common experience of racism, even if it manifests differently for our communities. There’s a real anti-Black bias in parts of the Asian American community, and it’s something I wanted to address because the insidious nature of White supremacy is that it seeks to pit communities against each other and creates a scarcity mentality.

AsAmNews: Tell us a little about your background. Have you personally experienced racism?

Phingbodhipakkiya: Yes, of course. I think we’d be hard-pressed to find a single Asian American who has not experienced some form of racism from the subtle to the overt. People expect us to be math geniuses, peers have wrinkled their noses or frowned with disgust at our delicious food, people comment on and mimic our “squinty” eyes. We experience microaggressions like the assumption that we’re quiet or submissive as Asian women, or we’re asked “Where are you from?” “Do you speak English?” as a conversation opener. We’re told “You’re not from here, are you?” or “Ni hao” as we walk by. All of these things have happened to be, and I know I’m not alone.

The pandemic exacerbated this already present racism that Asian Americans already knew so well. Before our city went on pause, I remember getting on the subway and as I sat down a man muttered “Get away!” and fled to the other side of the subway car. Walking to the park, a woman who was standing near other non-Asian people one side of the sidewalk, gestured wildly and aggressively for my husband (who is Chinese) and me to move to the other side of the street!

Phingbodhipakkiya: My training and knowledge in neuroscience trickles in and informs everything that I create. Much of my work is about fostering a sense of belonging because it is so crucial for our mental and physical well being. Neuroscience tells us that when we feel shunned or ostracized, our bodies react as if we had experienced bodily harm. With this series, I wanted to affirm that we as Asian Americans belong with bold imagery, bright colors and dynamic composition. I also wanted to create work that acts as a promise and a statement that we will continue to stand and fight, for each other and our home. 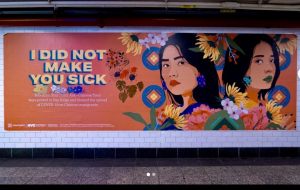 Photo courtesy of the New York Commission on Human Rights.

AsAmNews: What are your future plans for this series?

Phingbodhipakkiya: We have a few other installations planned as part of the I Still Believe in Our City art campaign. We’ll be sharing the work on bus shelters, Department of Transportation display cases, and LinkNYC Kiosks. I’m also hoping to partner with several community organizations to hold space for Asian Americans to tell their stories of hurt or healing. The campaign culminates with a community mural on Grand Street in the spring.

I’m also working with the commission’s Youth for Equity and Solidarity (YES) to develop an interactive installation to address the watershed moment of API youth sharing their experiences of sexual assault and gender-based violence. We will be launching the project “May we know our own strength” in the spring.

AAsAmNews: Is there anything you would like to say to our readers?

Phingbodhipakkiya: You have every right to be frustrated and hurt. Despite being a part of the fabric of America for more than 200 years, we still appear as outsiders to many in this country. Channel that anger into something productive: connecting with friends and family, strengthening ties in the communities you’re a part of, showing up and speaking out. There is no one right way to respond in such difficult times, but the most important thing is that you don’t do it alone. In times like these, we need to find creative ways to be together.

AsAmNews has Asian America in its heart. We’re an all-volunteer effort of dedicated staff and interns. Check out our new Instagram account. Go to our Twitter feed and Facebook page for more content. Please consider interning, joining our staff, or submitting a story. 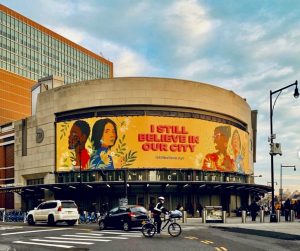 This exterior mural at the entrance of the Atlantic Ave subway stop remains on display. Photo from Amanda Phingbodhipakkiya website.