SEARAC, the Southeast Asia Resource Action Center, is calling for the Henrico Commonwealth (Virginia) Attorney to drop the charges against organizers who protested at the home of acting ICE (Immigration and Customs Enforcement) Director Tony Pham.  Mr. Pham, a career government attorney, helped ICE formulate and implement oppressive detainee policies. He was appointed by the Trump Administration to serve as acting Director on August 25, 2020.

The charges stem from a nationwide action held on September 8, 2020, when refugee communities across the US came together as one voice to condemn the appointment of Pham and called on him to “bring human rights home.” 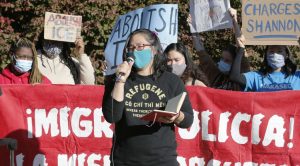 “When we say Bring Human Rights Home for migrants and refugees, we mean human rights for every person impacted by incarceration…every person separated from their families. Mr. Pham must answer for the multitude of human rights violations by ICE,” said Tracy La, Executive Director of VietRISE. ) VietRise statement

Protesters brought this message directly to Mr. Pham’s home in Richmond, VA. Mr. Pham has been criticized for using his Vietnamese refugee status to humanize the image of ICE.  Pham is a “puppet of this white supremacist regime,” said Cat Bao Le, Executive Director of SEAC Village from North Carolina. “We will not let this administration use Vietnamese refugees as a wedge to further divide us from our siblings,” Le added. (Video of VietRise press conference)

Following the September 8th protest at Pham’s home, President Trump called for the protesters to be punished. Clearly Trump’s intention was to interfere with the criminal justice process to bring heavy political punishment to protesters. This signaled government officials to begin targeting groups involved in the protest: SEAC Village, VietLead, and Charlotte Uprising.

Without warning a month after the protest, Nancy Nguyen, Executive Director of VietLead, a Vietnamese refugee organization was arrested on October 8 at her home in Philadelphia.  She was detained at the Philadelphia Police Department for 21 hours. She was released only after a nationwide media campaign to put pressure on city officials to #FreeNancy led by VietLead.

Nguyen’s “crime” was littering and trespassing at Pham’s home.  Why wasn’t she arrested then for this “crime” when it supposedly happened?  The manner in which she was arrested, detained and treated at the Philadelphia PD was abusive harassment.  Arrested in her home with her toddler children present, Nguyen endured crowded and unsafe conditions from COVID when jailed.  The police department tried to delay her release by spreading misinformation about her status.  She was also threatened with extradition to Virginia.

Nguyen stated, “I want Philadelphians to understand that I never saw a warrant for my arrest, apparently from Virginia and was never told clearly why I was being detained and separated from my family.” She went on to say that this “was an attempt to criminalize nonviolent peaceful protest.” (https://bit.ly/34jITlb) 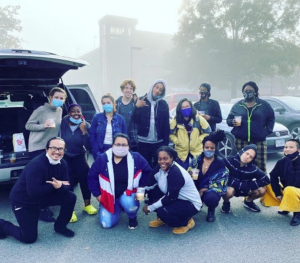 Trump’s appointment of Pham represents use of the model minority strategy to drive a wedge between a “good” refugee (Pham) who implements ICE’s inhumane practices like family separation and sterilization, and “bad” refugees who are protesting these practices. “I believe that this arrest was an attempt to silence and intimidate me, and my community, people of the Viet diaspora, Asian Americans, and immigrants broadly, from doing what we need to do as active citizens: speak truth to power,” stated Nguyen. (https://bit.ly/34jITlb)

To join this campaign to demand all charges to be dropped, please see the action tool kit.

Authors bio: Joyce Chiyomi Nakamura has been a social justice activist for the past 50 years.  Since 2017, Joyce has been active in building support in the Japanese American community for immigrant justice and against the Muslim Ban.  She is currently a member of the San Jose Nikkei Resisters and the SF/Bay Area Day of Remembrance Committee. 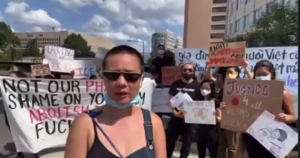