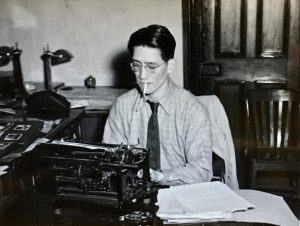 “Journalism is what we need to make democracy work.”  – Walter Cronkite

In 1953, Charles L. Leong submitted a winning article to the Freedoms Foundation, a nonprofit with a mission to promote responsible citizenship, character and freedom. The article read, in part:

I am a receding forty. I have a lovely wife, Mollie—and Rusty, two years old. Rusty is rough and ready, a real all-American boy. Me? I pat my widening waistline and console myself that life begins at forty…These have been my fateful, fruitful years, and while still this side of mid-century, I sense that I am a part of the great destiny of America which is forging ahead—sometimes hesitantly, sometimes naively, sometimes brashly and a little arrogantly, but always generously and kindly and courageously. I am an American of Chinese ancestry. I am a part of this America and its destiny. I am young enough to have escaped being a political scapegoat of the 1880s, when the cries of minorities’ persecution were “The Chinese Must Go!” I am old enough to have played a small part and to have relished with pride the generous praise and support given by my fellow Americans to my race during its courageous stand in World War II. I am mature enough now to stand with firmness and conviction when some hysterical Americans flaunt wildly that since China’s Moscow-inspired and directed masses are in deathly grip with our American boys in Korea, all persons who look Chinese, and are Chinese in racial origin, must be Communists.To them I say simply, with pride and conviction, “I am an American.”

Charles L. Leong (1911-1984) was a pioneering Chinese American journalist. In 1937, Charles was the first Chinese American editor of a college daily, San Jose State’s The Spartan. After military service in World War II, he was the first Asian member of the Press Club in San Francisco. For fifty years, Charles L. Leong was an English-language news reporter, editor, publisher, and author in America, China, and San Francisco Chinatown. He worked with the San Francisco Chronicle, Chinese News, Young China, Hokubei Mainichi, Asian Week, and the United Press. He was a community activist with Cathay Post, Leong Family Association, Kong Chow Association, and Chinese Consolidated Benevolent Association.

And his rough and ready two-year old Rusty, we know better as Russell C. Leong, who was described as “arguably the most influential and significant individual in the field of Asian American studies because of what he accomplished as the Senior Editor of Amerasia Journal,” said Dr. Don Nakanishi of the UCLA Asian American Studies Center. 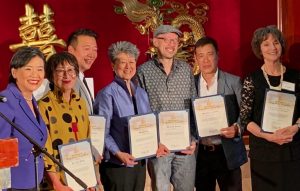 Charles was born in San Francisco, and raised by an immigrant single mom in Pajaro, California. Chinese in Pajaro thought that the nearby Watsonville Chinatown was the “big city.” Much of the Pajaro’s “Brooklyn Chinatown” – as it was on Brooklyn Street – was built on stilts as the Pajaro River floods regularly. Founded in 1888, Pajaro served a lot of the Chinese, Issei, and manong farmworkers of those days.

According to the Pacific Rural Press of September 1918, Chinese controlled 80% of the apple drying industry in this part of Monterey County. Charles wrote:

Right after school, during the apple season, I earned money by making boxes in which were packed the dried fruits. When I first started, I was too short so I stood on a platform. Another job was to stencil the packed boxes with a thick black ink for addresses with faraway place names like London, England; Oslo, Norway; and Berlin, Germany. A few times I slipped my name and address into the boxes, but I never heard from anyone in that part of the world.

At Watsonville High School, Charles did unusual things – for a Chinese American lad – like join the school band, run track, and work at a White-owned drug store. Then he went to San Jose State and honed his writing skills. In between his college years, in 1936, Charles spent a year in Los Angeles making $7.50 per day as an extra on ten Hollywood sets. Hollywood then had a Chinese obsession. American-born Charles wrote:

I was transplanted one day to a China of which I had never dreamed. It happened the first day on location. The scene was a carefully copied version of a Chinese rice field. The replica of the now famous farm for The Good Earth at Chatsworth had cost MGM thousands of dollars. It was authentic. Too authentic. Long, dark rows of fertile, hand-tilled soil; straw-thatched huts of the peasant farmers in the background. It was a most incongruous scene—there were sound apparatus, movie cameras on cranes, to follow the “shots.” We had on coarse peasants’ wear with artificial queues coiled on our heads… I was barefooted and hoeing a thin row of rice shoots. I felt the warmth of the soil. I was in China. And back of me, a camera followed my every action…Was this a dream, a fantasy, realism? Was this China or Hollywood? “This, but for the grace of God,” I thought, “I might actually be doing…”

During the past ten years, there have been about thirty-five productions, major and minor, utilizing Chinese players. Practically the same bit players and extras, at one time or another, have appeared in them all. No wonder the American gag claims that “All Chinese look alike.” They are alike, and the same persons— in the movies, anyway.

After an M.A. in journalism from Stanford, Charles found his next step in San Francisco:

By now, San Francisco was not new to me… Chinese Americans from all over Northern California came here for dances, for the climax of the Tahoe Christian Conference. Also [we came] for very practical reasons, such as the routine of getting even a haircut. In those days, unlike now, White barbers treated Chinese coldly and uncomfortably. Living in Chinatown was an exciting new time for me. But even if I had wanted to, I couldn’t live elsewhere. Today Chinese live all over San Francisco. At that time, landlords did not rent to Chinese beyond Mason Street…

I met a Chinese American named William Hoy, who certainly must be credited in history as the   first to research and write about the Chinese in California.

Hoy and Leong established the Chinese Press, one of the first weekly English-language papers focused on Chinese Americana. It was established in 1940 but soon after, both Hoy and Leong were called into the military. Charles described his days in South Carolina for overseas training:

For the first time I saw with my own eyes what I had heard about: the direct, open race discrimination as practiced then against the Black people (then called Negroes) in the southern United States. Of course, by now I knew of the subtle race prejudice and lack of racial understanding in San Francisco and California. But here in the deep South, it was an accepted practice, a way of life. Blacks had separate schools, separate drinking fountains in public, separate theater entrances and restricted seating. The Blacks gave way to Whites on the streets. They sat only in the back of buses. The Blacks definitely were second-class citizens, and color was the label. These things I witnessed personally. I must confess that at the time, knowing that my color was different too, I had mixed feelings of both fear, yet relief that not being Black, I was not living in this prison without bars. 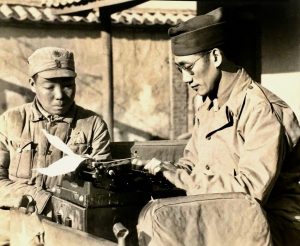 In his long career, Charles had opportunity to co-author a book with Johnny Kan entitled Eight Immortal Flavors: Secrets of Cantonese Cookery (1963). Johnny Kan (1906-1972) was accredited for inventing ginger and lychee ice cream for San Francisco’s Fong Fong Bakery. Kan was also proprietor of Cathay House, Chinese Kitchen, Kan’s and Ming’s, all venerable eateries. But Leong’s contribution to the cookbook is an early template for Asian American studies’ textbooks:

The golden enchantment of California in 1849 brought Chinese as well as men from other parts of the globe to the Golden State. With a fine sense of poetry and realism, the Chinese in their native tongue spontaneously referred to their new home as Gum Shan, or Golden Hills. For more than a century, San Francisco Chinatown has been the center of the world of Gum Shan…

San Francisco, for the Western hemisphere, is truly the paradise of the Chinese epicure, and is second only to Hong Kong. The Chinese population in this city by the Golden Gate is the size of the modest American city—50,000 persons. Half of this number lives in the Native Quarter known as Chinatown, a “city within a city” of many moods and intrigues, including even a temple rooted in its founding location of over a century ago. Within its Quarter, Chinatown serves every need and desire of the human being, from stomach to soul, from birth to burial. Like eternal Rome, Chinatown is the center of its world. Chinese from all over America make a pilgrimage to Dai Fow, which means emphatically The Big City, or San Francisco (Chinatown).

The Chinese Historical Society of Southern California (chssc.org) recently collaborated with Professor Russell C. Leong to collect some of Charles’ writings in an album to memorialize the tenacity of the Chinese American spirit. In this special edition of CHSSC’s Gum Saan Journal, Charles Leong writes about “several deep stabs into my spirit and belief in the equality of the American system”. But he teaches us to be “rich in being Chinese American.”

Author’s Bio: Born in Taiwan and raised in the Philippines, Susie is a longtime member of the Chinese Historical Society of Southern California. She is also Associate Professor of History and Asian American Studies at Pasadena City College.