Editor’s Note:  My sister Donna Wong shared this speech by Bonnie Youn from the April 3 rally, which was sponsored by the Southern Christian Leadership Conference and others in Marietta, GA.

Thank you so much Donna Wong, Dr. Ben Williams, the Cobb County SCLC, and the Coalition of organizations that invited me to speak today in Marietta Square, in a rally to support the Asian American community, and commemorating the anniversary of the day we lost Martin Luther King, Jr, 53 years ago tomorrow, which coincides this year with Easter Sunday. So glad to stand together with Rev. UIijin Hwang, Vyanti Joseph and Sen. Sheikh Rahman. 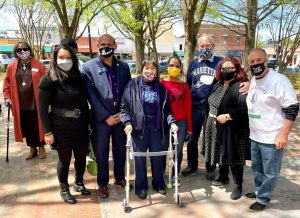 I share my speech to honor the AAPI women and victims, to give them a voice and to uplift their stories.

Dr. Martin Luther King, Jr. said, “We may have all come on different ships, but we’re all in the same boat now.”

From slave ships, to ships that brought Asian plantation and railroad workers. To our Latin American brothers and sisters that braved deserts and borders. To planes that brought immigrant students and workers. All coming to America’s shores and borders, praying for a better life.

WE ALL ARRIVED ON DIFFERENT SHIPS. BUT WE’RE IN THE SAME BOAT NOW.

I thank the Southern Christian Leadership Conference, and this Coalition of groups, for inviting me today, as we are gathered to commemorate the 53rd Anniversary of the assassination of Dr. King. The hate crime that took his life resonates so deeply with the Asian American community today. Why are we reminded of this terrible hate crime?

But the killing and the hate did not stop there. The women continued to be murdered again and again.

After this man shot them, the Justice System killed the women again, when we he heard law enforcement pronounce, from Day 1, that this was “not a hate crime.” That the suspect was just “having a bad day.” They took the words of the killer over the undeniable fact that 6 Asian American women lay dead. That he had intentionally driven 40 minutes from one Asian-owned business to another Asian-owned business to commit these acts.

The Justice System killed them again when they failed to identify these victims for nearly a week, ill-equipped to deal with language and cultural barriers. Why is that?

As we saw the news unfurl through Atlanta, ripping and rippling through our communities, the media then had their turn at murdering the women’s reputations.

They sensationalized the headlines: ASIAN WOMEN KILLED IN MASSAGE PARLORS. They perpetuated the stereotype that they were undocumented. That they were sex workers.

That narrative continues today, even after we learned the names and ages of these victims.

They were between the ages of 50 – 74 years old. They were U.S. citizens, Permanent Residents. They were the cleaning ladies, the cooks, the frontline workers. 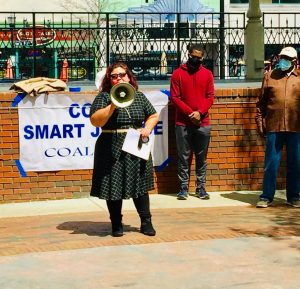 I want to tell you the story of one of these women.

She was the mother of two Black and Korean American sons: Robert Peterson, a Morehouse man and Sociology Professor, living right here in Atlanta. His older brother, Elliott Peterson, who enlisted and served in the U.S. Army for 24 years and now, in retirement, trains American soldiers. (Excerpted from the Atlanta Journal Constitution)

Yong Ae’s son Robert said Yue was a traditional Korean mother.  But she was adamant that her sons know both of their Black & Korean heritages. To her, “one was not more valuable than the other.”

Her son Elliot said: “She made sure that we were strong and very committed to that part of our racial identity. She also recognized we grew up in America and discrimination against Asians and Blacks is part of the American fabric.” 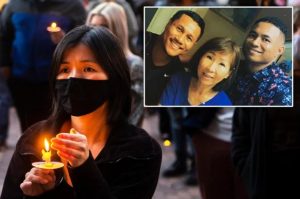 “My mom was always an advocate of treating people right, always not letting us be embarrassed of who we were. Always ready to stand up and speak about discrimination if she saw you actively discriminating.”

Just this week, there was an attack in New York, where video captured a man viciously attacking a helpless 65-year-old Filipino American woman. This is yet another example of the rising epidemic of violence against Asian Americans, targeting the elderly – the most vulnerable among us.

Elliott said, had his mother witnessed such a thing, “She would have intervened. She’d stand up and say that you need to protect those who aren’t able to protect themselves. Now you can see how great my mother was.”

Many people say that Asian Americans, for the most part, have been invisible in the fight for Civil Rights. But we were there from the beginning.

Dr. King invoked Mahatma Gandhi, drawing heavily from the Gandhian principle of nonviolence. He wrote that “while the Montgomery boycott was going on, India’s Gandhi was the guiding light of our technique of nonviolent social change.” 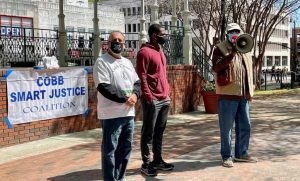 When John Lewis and the Freedom Riders and met in Washington, DC, the night before they were to begin their brave journey, they gathered in a Chinese restaurant to break bread. Many of them had never tasted Chinese food before. But I can only imagine that one of the reasons they went there was they KNEW they would not face discrimination and hatred while eating their meal. I am comforted that this Asian food, prepared by my Asian American brothers and sisters, nourished and fortified their bodies so that they would have the strength to forge ahead.

We may have all come on different ships, but we’re in the same boat now. And a rising tide lifts ALL ships.

This past Election Cycle, AAPIs stood side by side with all people of color, to make history. To change the face of Georgia forever by electing a Democratic President. A Black and Asian American woman Vice President. And two Democratic Senators – the first Jewish and the first Black Senators of Georgia.  Of those 11,780 votes that turned the tide, Asian American voters were there, amplifying and contributing to the wave that saved Georgia. That saved America.

Don’t let them take that solidarity away from us with these new Voter Suppression Bills. They cannot and will not take our votes away from us.

Because, as Dr. King said, “We will NOT be satisfied until justice rolls down like waters and righteousness like a mighty stream.” 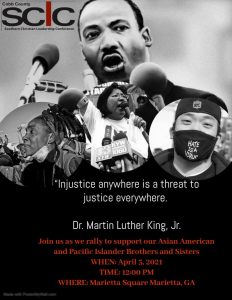 Attorney Bonnie Youn is a Board Member and Past President of the Georgia Asian Pacific American Bar Association, and a former Board member of the Korean American Bar. A former immigration attorney for nearly 20 years, she was recognized locally and nationally as community leader in 2013 as a White House Community Champion of Change and was honored by the Georgia Asian Times as one of the most influential Asian Americans in Georgia. Now a legal recruiter, Bonnie attended Boston University Law School, and Brown University, which recognized her as one of its Outstanding Asian American Alumni. She continues to advocate for progressive reform and civil rights in Georgia, fighting and serving as a voice for our Asian American communities.