Editor’s Note:  After watching Tony Nguyen’s latest short doc, “I SEE ME,” which was released online for the observance of Asian Pacific American Heritage Month in May, I contacted him to learn more about his work. He’s created an interesting body of work rooted in the Vietnamese community and in his hometown of Oakland, CA.  This interview was conducted in July via email.  I look forward to meeting him one day.  His friendly, down-home manner really comes through in his films.

Eddie:  Tell us a little about your work as a filmmaker-in-residence at Asian Health Services. What do you do day-to-day? How has that been impacted by the Covid-19 pandemic?

Tony: I’m the video producer for Asian Health Services where I direct, shoot and edit short portraits about our annual gala honorees, our providers, and our patients and their health needs.  Filming was initially impacted by the pandemic but have resumed with safety protocols in place (social distant shoots). 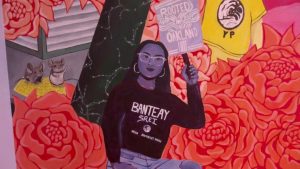 Detail from mural by Kathy Liang.

Eddie:  What drew you to make a short doc on Kathy Liang?  I really like how you place her work in the context of community both with Banteay Srei and Asian Health Services.

Tony: I SEE ME was produced by Asian Health Services (AHS).  It was an assignment from AHS CEO Sherry Hirota, whom I have the privilege to work under.  She’s one of the most incredible Asian American community leaders in the country and a tremendous source of inspiration and guidance in my life.

Eddie: Tell us about your documentary approach. Do you sketch out a rough storyline or is it purely a verité approach of following the subject?  How much time did you spend with Kathy just observing her art practice before collaborating on the film?

Tony: For the Kathy short, I was informed that she recently painted a beautiful mural, which I wanted to include in the piece.  I reached out to Kathy and we met for a pre-interview, which helped me learn more about her backstory and how she got into painting.  I also asked her who’s helped her grow as an artist, and two of the people are included in the short.  Because she’s a painter I knew I wanted to show that.  From there, I thought about the themes and topics she discussed in the pre-interview and prioritized the ones I thought might appeal to viewers.

Eddie: How will I See Me be used or distributed?

Tony: I SEE ME is distributed online on the Asian Health Services’ Facebook page.  Writer Pendarvis Harshaw was also kind enough to write a short article about Kathy and the film for KQED, which can read:  How Yuri Kochiyama inspired this young Oakland Artist.  The article provides an update on Kathy and where she will be attending college.

Eddie:  I also enjoyed “Fresh Frozen,” which is also set in Oakland and captures a “slice of life” in downtown but also the personal story of the cook/proprietor who overcame some serious obstacles to build a thriving business.  I see that Catered to You is doing take-out service.  Do you still get their fish sandwich?  How did you convince her to allow you to film her life?

Tony: Thanks for checking it out, Eddie.  I’ve been a regular at Teena’s little shop, eating up her bomb fish sandwich – the very best in Oakland, in my opinion.  One evening a few years back I told her I make documentaries, asked if I could tell her story, and she said yes.  So, her film, FRESH FROZEN, is the first of the Oakland Shorties series – small vignettes about individuals and/or communities that are often overlooked but make up the fabric of the Town.  Teena’s shop is currently open and doing take-out service.  It’s been tough during the pandemic, but her wonderful daughter Monita is holding it down.  If you live in the area, please support this small black woman-owned business. https://www.yelp.com/biz/catered-to-you-oakland

Eddie: Are there other films in the works for the Oakland Shorties series

Tony: Not immediately.  Last summer I made a small film called G. BRONSON about an aspiring musician who grew up in foster care, which premiered at Oakland Shorties 2 at the New Parkway Theater in July 2019.  You can watch it below.   It wasn’t a deliberately planned on my part, but it’s nice that I SEE ME fits into theme of the Oakland Shorties, so I see it as the third one in the series.

Eddie: I also enjoyed “Giap’s Last Day at the Ironing Board Factory.”  It seemed to be journey of discovery for you, both about your mother’s life and about how you reconciled many aspects of growing up in the Midwest.  What did you learn about your mother that most surprised you?  How did making the film change how you see your past and present

Tony: Thanks Eddie.  You know, growing up I didn’t really know what my mother did for a living.  I knew she worked in a factory but had no clue what she did exactly or what kind of place it was.  So, going there for the first time with a camera in my hand was a huge shock.  Watching her work a 250 lb press and seeing how her co-workers admired her.  I mean, I just left feeling a deeper appreciation for what she did to survive there, in Seymour, Indiana.  I’m a parent to two children who rarely get to see their grandmother.  So, with this film I hope it helps them gain a better understanding of their family’s refugee roots and what their grandmother’s life, what their father’s life, was like in small town U.S.A. (Editor’s note: you can watch the full film by pasting this in your browser: https://vimeo.com/106235048) 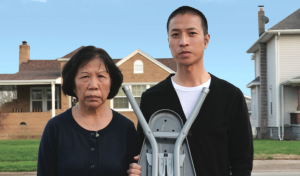 Eddie: How are you coping with life under Covid-19?  I know you have young children so are you doing work as well as being full-time caregiver?

Tony: It’s been extremely tough, just like it has been for so many people around the world.  I miss my office, my friends and colleagues, my family.  But we count our blessings and I’m grateful that the kids and I have our health, that I have a job, am able to make rent, pay bills, and live a pretty good existence, all things considered.

Eddie: What do you want to work on next in terms of film projects?

Tony; I’m working on the follow up to my mother’s film, which is about solving a 45 year-old mystery: the identity of my father.

Eddie: What are you watching these days?  What do you recommend that folks check out in docs and feature films?

Tony: Unfortunately, I haven’t seen that many docs or narratives in 2020 that I’d recommend.  But DRIVEWAYS, a quiet film by Andrew Ahn is pretty great.  Love the piano soundtrack by Jay Wadley.

Editor’s Note: You can watch “Driveways” for free via Hoopla (you can sign up with the SF Public Library) or rent it on Amazon Prime. Andrew Ahn also directed “Spa Night,” which premiered at the Sundance Film Fest in 2016 and has been nominated for several awards.