Every few months, friends, family and former students of piano teacher Nobuko Fujimoto gather at her home in the Crenshaw District of Los Angeles for a musicale, a small, informal concert.  Although Mrs. Fujimoto, who is 97 years old, suffers from dementia and is unable to carry on much of a conversation, her friends and former students are devoted to her and express their love through the gift of music. As they play classical music, jazz and pop, Nobie as her friends call her taps out the rhythm of the music and smiles. 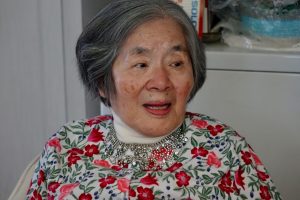 As you will learn in the video with Carla, Mrs. Fujimoto’s daughter, Nobuko was a child prodigy whose debut on the international stage was cut short by WWII and the forced relocation of her family to the Heart Mountain Internment Camp in Wyoming.  Without a piano available for daily practice, Nobuko Fujimoto could not attain her goal.  After the war, she devoted herself to teaching piano to young people and raised three children with her husband George.

In an interview with Piano Forte, Mrs. Fujimoto recounts who influenced her love of the piano.

“My mother.   I thank her every day for her inspiration and the sacrifices she made on my behalf. She was a Japanese picture bride and her love of music was an important influence throughout my childhood.  My father bought her a piano and she took lessons, so our house was filled with music.  At age 6, I started lessons and she accompanied me to my lessons on a streetcar. This was at a time when bread was $.05 and my lessons were $10.00, so you can appreciate the sacrifice my parents made for me. I studied with the best teachers and at a young age was invited to play at many public venues, but my parents were vigilant against my being exploited and limited my public exposure.” 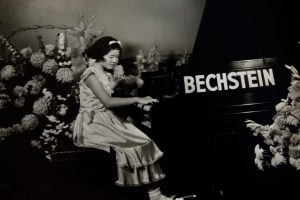 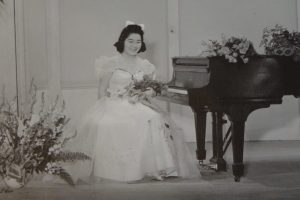 Scott Nagatani, leader of the jazz group LosAKAtombros and musical director for many LA theatrical productions, shares this story from his years studying with Mrs. Fujimoto.

At age 8, I was sent to take lessons from Nobuko Fujimoto, a Nisei teacher, who lived within walking distance from my house. My mom knew of Nobuko Fujimoto from growing up in Boyle Heights and Little Tokyo.  Nobuko was herself a prodigy classical pianist, rare for a Nisei, and was slated to even tour Europe as a child before WWII broke out.  During her teaching career, we estimate she taught about 900 students – most of whom were Japanese American.

Over the past years, Scott often came to play duets with Mrs. Fujimoto and after she was no longer able to play, he would play her favorite classical compositions for her.

In the following videos, Carla talks about her mother’s career including footage of a rare performance.  In the second video, Mrs. Nobuko Fujimoto is seen enjoying the company of former students and friends as she listens to an original Scott Nagatani tune “Gidra People” performed by LosAKAtombros. (Note: Gidra was a radical Asian American community newspaper founded by UCLA students in 1969.)

As I communicated with other former students, it became clear that Nobuko Fujimoto was a master teacher, whose skills and dedication inspired students to strive for perfection. She taught her students to be organized, attentive, diligent, and hard working. These skills enabled her students to achieve success in many different fields, not just music.

Donna Noguchi, who has studied with Mrs. Fujimoto for over 50 years, describes how Mrs. Fujimoto’s teaching methods in the video attached to this article. Scott Nagatani demonstrates how those techniques are applied in his performances.

Mrs. Fujimoto described her methodology called Keyboard Choreography in an interview with the publication Piano Forte.

It was an evolving process based on my own experience and the exercise in Haonon’s The Virtuoso Pianist.  I had always been told by my teachers that I had a beautiful tone, something that I was never taught but that came naturally. I tried to discover how I produced my tone so I could teach it to my students. The Hanon exercises were part of my development and I realized that they contain many of the five finger patterns and chord patterns found in the piano literature.  I decided to use them just as a ballet teacher uses barre exercises.  In addition, I discovered that the rotation of the wrist and hand in a circular motion while playing the exercises created a beautiful tone.

While Mrs. Fujimoto was strict, she also was sensitive to each student and found ways to work with them to get the best performances possible. Jean Kitamura began her studies with Nobuko Fujimoto as a teenager and continued through her college years. “Piano performance juries, of which there were many, were always a stressful time,” said Jean Kitamura. “I would perform my repertoire and she would make constructive comments.  She would say ‘try a more reflective pause and take your time… or phrase it like you are singing it and be sure to take breaths.’  She also used imagery, i.e. fly me to the moon – think night, gentle moon, peaceful, flying lightness… use your imagination. Her ideas were always spot on. It made me feel confident and ready.” 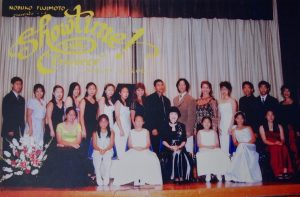 Mrs. Fujioto and students at recital on Aug. 19, 2001. Photo courtesy of Carla Fujimoto.

Keiko Kuma, who had studied piano in Tokyo since the age of 3, sought help from Mrs. Fujimoto to prepare for a musical audition at UCLA.  She shares this story about Nobuko’s “tough love.”

Adjusting to ‘adult’ practice (Mrs. Fujimoto normally taught young people) was hard.  And Nobuko had a teaching rule of ‘3 strikes.’ First mistake was ‘just a mistake.’ The same mistake a second time was ‘student made mistake by not practicing enough.’ And the third time the same mistake repeated was ‘student not getting it right and the teacher needs to introduce a different method to teach.’

I was playing Rachmaninoff, which had many difficult chord progressions. I had to recite each of them while keeping rhythm in time.  My fingers kept slipping off.

‘Well, honey,’ said Nobuko sitting back in her chair as if to say the time came now. ‘You made three mistakes with the same chord progression. Normally, I give a different method to fix the problem. But in this case, you are an adult. You need to think first why you made this mistake. Tell me why.’

I know you told me, but my brain hasn’t adjusted yet. So, my fingers cannot move.,

There was a long pause. Nobuko’s mouth was open to a large O, and her eyes were wide. Slowly, she turned to look at John (Keiko’s boyfriend) as if she wanted to ask him if he had ever heard this kind of excuse before. John offered no comment.  Then she looked at me in wonder. As her mouth closed slowly, her eyes narrowed like a thin noodle. ‘Well,’ said Nobuko leaning forward towards me, ‘When are you going to adjust your brain?’

I replied firmly, “Soon.”  At that moment, there was loud laughter in the distance.

Another  insight on why Mrs. Fujimoto’s students have remained so devoted to her is revealed by Lucille Muto Tayama.

I was privileged to be one of Nobie’s first students when I was approximately eight or nine years old and continued until I was approximately 22 years of age when I got married.  Throughout my piano lessons, her personal life of having three children and George cooking in the kitchen were familiar sounds of home life.  Her focus never veered from anything else but the lesson in the moment with her student. She was always dedicated and prepared for us, whether we missed a lesson or had not practiced our lessons.

In my later years of having piano lessons with her, she became flexible in that I was never prepared for lessons. We ended up talking about life and its challenges instead.  That is where the roles of teacher/student changed to friend/friend to this day.

Her thirst for learning and engaging in new experiences as a person has been an admirable quality I hold dear to my heart and continue to be inspired by her presence! 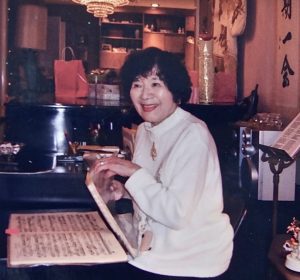 Nobuko Fujimoto faced adversity through her young life. Despite a lack of riches, her parents recognized her talent and made sacrifices to enable Nobuko to flourish as a budding concert pianist.  Tragically, her career came to a halt with the family’s incarceration during WW II. But she never gave up her love of music and instead of being embittered she turned her talent to teaching several generations of musicians and piano teachers.

Nobuko Fujimoto’s grit and determination are best illustrated when she faced racial discrimination.  Here is a passage from her brief essay, “My Life Story,” written in 2005.

Mrs. Sargeant, the head of the Music Department at Belmont High School, was a bigoted, anti-Japanese person when I enrolled in her harmony class.  In spite of my meek, non-confrontational persona, I refused to accept her prejudiced, demeaning attitude and treatment by ‘showing’ her that I was a well-trained pianist by enrolling in her piano performance class.

The turn-about transformation of her hateful and hurtful attitude was demonstrated when she asked me to perform at our graduation program!

The school had a Steinway Grand that Ignace Paderewski had used when he gave a concert in Los Angeles. When I practiced on it, I found the action extremely stiff and I had difficulty completing Liszt’s Dance of the Gnomes, which I was to perform.

My mother told me that when I performed, the restless audience became quiet and listened attentively. As a Japanese mother, although she must have been proud of me each time I performed, she never expressed it. Sitting that night in an audience of 2,000 must have been a very special experience for her and, for me.

I would like to think that there are many more Nobies in our midst, i.e. those rare talents whose art and humanity teach us that the joy of life comes in the sharing of good food, fine music, and the community of friends who nurture us through good and bad times.

Nobuko Fujimoto, thank you for inspiring us, teaching us, and being a light in the world.

Author’s bio:  Eddie Wong is the editor/publisher of East Wind ezine. I wish to convey my deep appreciation to Carla Fujimoto for enabling me to write this story and attend the musicale. 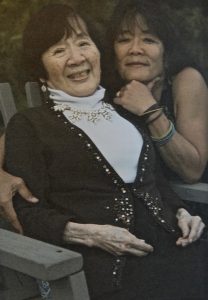 In order to give you a sense of the joy and beauty that transpires at Mrs. Fujimoto’s musicale, here are several video clips of the performances from March and May 2019.  I want to express my deep appreciation to all the musicians who participated in the musicale.