Memoirs of a Superfan Volume 15.8: Inferno Canto 2020 – Saying Goodbye to Donald Trump, at the Ninth Circle and Fourth Ring

After Barack Obama won the presidency on November 4th 2008, the 4-11 after 9-11, after the long horror of unjust, unjustifiable and sociopathic wars, 8 years after an election adjudicated by a one vote margin in the Supreme Court and against the popular will of the people, I felt catharsis and relief. The night of his victory, I texted a dear friend the last lines of Dante’s Inferno:

“And thence we came forth,
Gaining again the sight of stars.”

The lines made her weep.

Eight years later, after the election of Donald Trump, it was obvious that the country was nowhere near Paradiso. I suggested to my friend that we re-read Inferno instead. Many people consider Inferno the most vivid and entertaining book of The Divine Comedy. And truth be told, many people voted for Trump for the entertainment Inferno, right?

It’s just delightful, isn’t it, to imagine punishments, even eternal ones, for the characters who done did us wrong. And if they done did Christ wrong, well, they deserve the worst punishment of all, per Dante’s pen. So in Canto XXXIV we finally come to the Ninth Circle and Fourth Ring of Hades, and we encounter a giant bat-winged Satan, Emperor of Pain, eternally munching on Judas Iscariot. Brutus and Cassius are thrown into his maw for good measure. 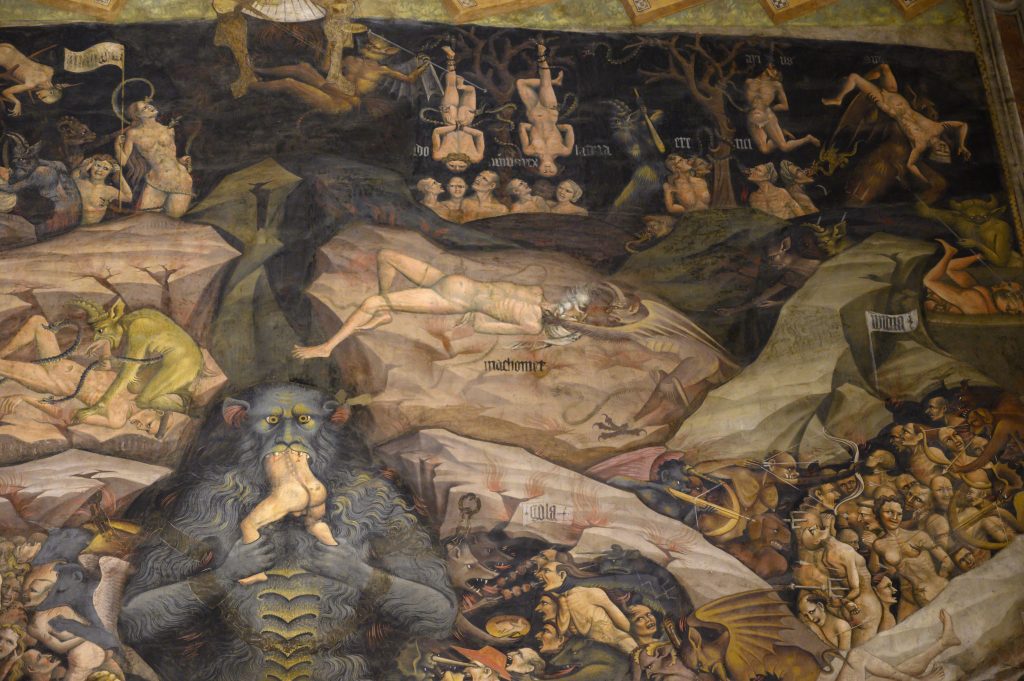 Personally, I couldn’t really imagine a better living contender for Evil Personified than Donald Trump, and maybe we’ll get to witness his punishment in this life. Trump is the ninth president of my life-in-America, and this is the fourth year of his term, a nod to poetic justice at the very least. He’s embodied the worst of human nature. He’s one of the folks Dante warned us about. His only redeeming features are that he puts a pin on everything a person should not be, and he has fueled our urgent fight to journey on.

Let us take a moment to review the empire of our common pain, so that we might more surely pass into some more divine abode, and again regain the sight of stars.

The Gnostics considered self-centeredness sin, or “missing the mark,” and Trump is nothing if not the epitome of selfishness. We’ve all got self-centered bits, of course, but they tend to dissolve with awareness and commitment to relationship, neither of which is a strong suit for Mr. Trump. He’s been suit-less, uncouth, naked, in the spotlight, not losing his religion but promoting it. I have called the last four years our “Global Teach-In on Narcissism,” and it has also been a dramatic, vivid, living example of how hard it is to break free of an abuser’s grip. Trump, the abused child, has grown up to be an abuser and to think that abuse is “winning.” He, like the abusers in many of our families, is supported by many. 74 million people voted for him. But Constitutional democracy has held. 81 million people voted against him. Still, the whole thing seems so damn contingent on the ethical bearings of people who largely worked invisibly before these last few months. Their positions could be the target of the next generation of ugliness, because the diseases of selfishness and partisan tribalism are still endemic and too easily propagated. The last four years have not been a shining example of ethical bearing in leadership. I, for one, don’t yet trust that we – or at least the Republican Party – cultivate ethics and responsibility for one another in anything approaching trustworthiness on a national scale.

Is selfish abuse “winning”? Tragically, there is all too much evidence that this can be true, financially, politically and sometimes interpersonally, if not all the other ways that make life and our journey possible. Humanity has risen from violence and abuse in dramatic and inspiring ways. Our nature is nurture. But … do we have to nurture everything? And everyone? That word cultivate is key. What do we choose to nourish, feed, grow? In ourselves, our relationships, and society?

Our nature is nurture, but we have also lost so much on our journey in time. Our social being has eroded as we’ve cluttered our lives with bricks and walls and wallets and bills and apps and powerful engines. We have outsourced our energies to devices, seeking control. White Americans have conquered a land, settled it, displacing and destroying peoples, and they’ve destroyed themselves too. They’ve destroyed people who from their pain still rise to add soul and conscience to the journey. When will it be their journey? When will it be a journey we can truly call our own? When will the circle be unbroken? 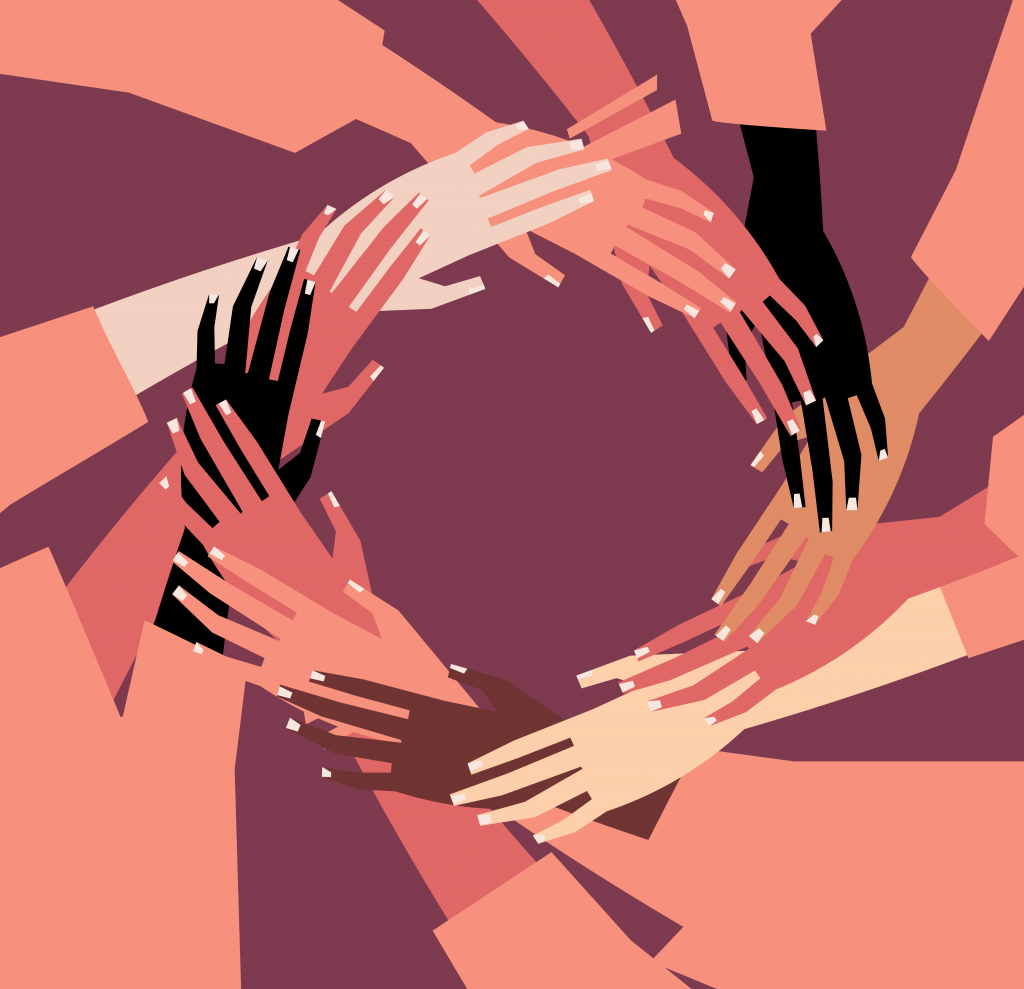 Can we at least break the seal of this benighted ninth president’s circle?

Trump is the magnified ego of a particular kind of White American Maledom, a giant cardboard cutout, ominous and banal at the same time. Straight from Central Casting, it seems, right down the pipeline of pompous White Male grandiosity that spits out Trumps and Derek Chauvins, the defensive, constantly belching, insidious, nefarious institutional plumbing that is hella broke and threatens to break us all.

All those conservatives railed against “identity politics” but Trump played identity politics to full advantage on his home court. He lost all the away games, but that hometown crowd is still largely cheering, even as his teammates abandon him, having gotten enough source material for their media deals, no doubt. But they were his source material, he chewed on them daily, and I wish them luck in chewing on the memory of what he did to them, and to all of us, for the rest of their lives.

The recently deceased David Prowse said he chose to play Darth Vader over Chewbacca because “they always remember the bad guys.” You just don’t forget your abuser. You just don’t forget the devil. You just don’t forget the people that called the devil their god. Maybe when they realize the Emperor has no clothes, they’ll be open to the journey that reveals life isn’t all about them, or about him. It’s not all about me, either, or about any one of us, or any group. What is it about? Well, choose your own adventure. Come as you are. We nurture what we nurture. I’m not nurturing my grudges, but they are there. I’m not one to let Donald Trump live rent-free in my mind; but he is here, with all those who have deviled me, where I’m chewing on them, bat wings and all.

We are individuals, and we are a society, of sorts, though not fully a civilization that can hold illness at bay, whether the physically manifest illnesses that afflict us, or the invisible ones in consciousness which some strangely champion as their almighty.

Let us not forget. Let us not forget the people who have died against this wall of selfishness, hatred, tribalism, avarice and ignorance. Let us not continue to build our fortress from these bricks. They have crumbled. We are exposed. Everyone knows.

We are not yet a society that cherishes life and the living. This puts us at odds with religion, spirituality, reason, science, compassion, and common sense, to say the least, but not the vested interests of money, racism or the mirage of extreme individualism. I saw a picture of a MAGA-hatted White man hoisting a sign that read “selfish and proud.” 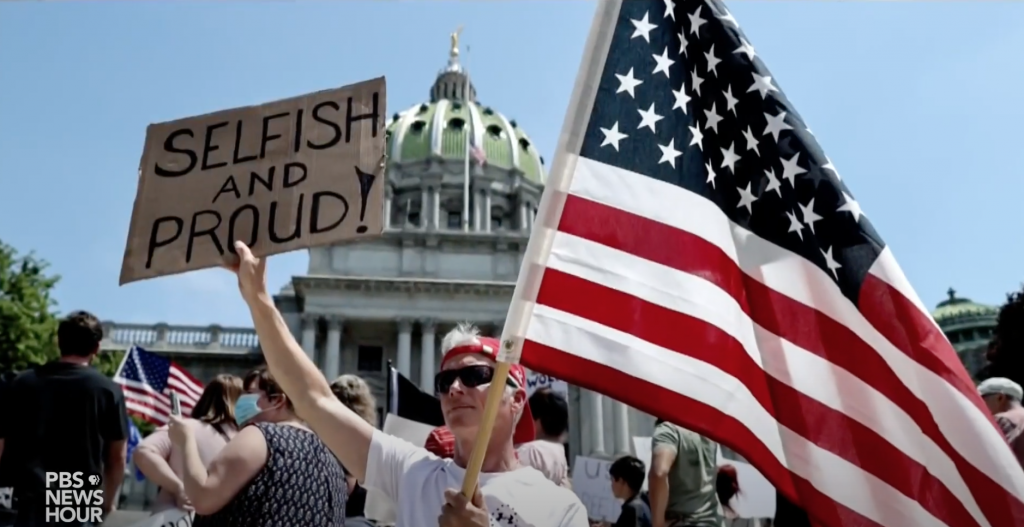 Could America be more unmasked than this? As Seth Meyers recently said, “if you’re tearing down and burning Black Lives Matters banners from Black Churches (as happened earlier this month in Washington, D.C.) you should probably reconsider who you think the bad guy is.”

But as unprepared and unwilling as I am at this moment to talk to these extreme examples of the President’s support, I know that they are only the shiny disco ball in Club America. I’m not that interested in them. They’re probably just hooked on their feelings. Good luck with those.

I’m hooked on other feelings, feelings of contact and relatedness, important because I am stalwartly hooked on people. I’m hooked on the reality of interdependence, and aghast at the people and belief systems that are blind to what’s right in front of their eyes.

Well, I guess it’s only because I have experienced relationship that I am committed to propagating it. Love and kindness have steadied my ship, and their lack has rocked, and at times, even capsized it.

I gained again the sight of stars.

For a moment, I thought again that this, empathy, is what comes natural to us, as humans. But America, as it stands, is not something that came natural. Quite the opposite, in fact.

We’ve been distorted from natural direction
by a gravity that wants only its satisfaction.
It still spins us. It tests our will.
But we are migrants all, and we journey still.

Even the unnatural, the selfish, has come from our nature. It becomes unnatural and poisonous because it has become disconnected from deeper nature, as are we all. But I think it’s possible to reconnect. That shiny disco ball of ego might just tell us something about our human dance, and motivate us to at least enlightened self-interest.

Here’s to the journeys of identity, belonging and wellness that we all share, and that we can all remember, remember to begin again. 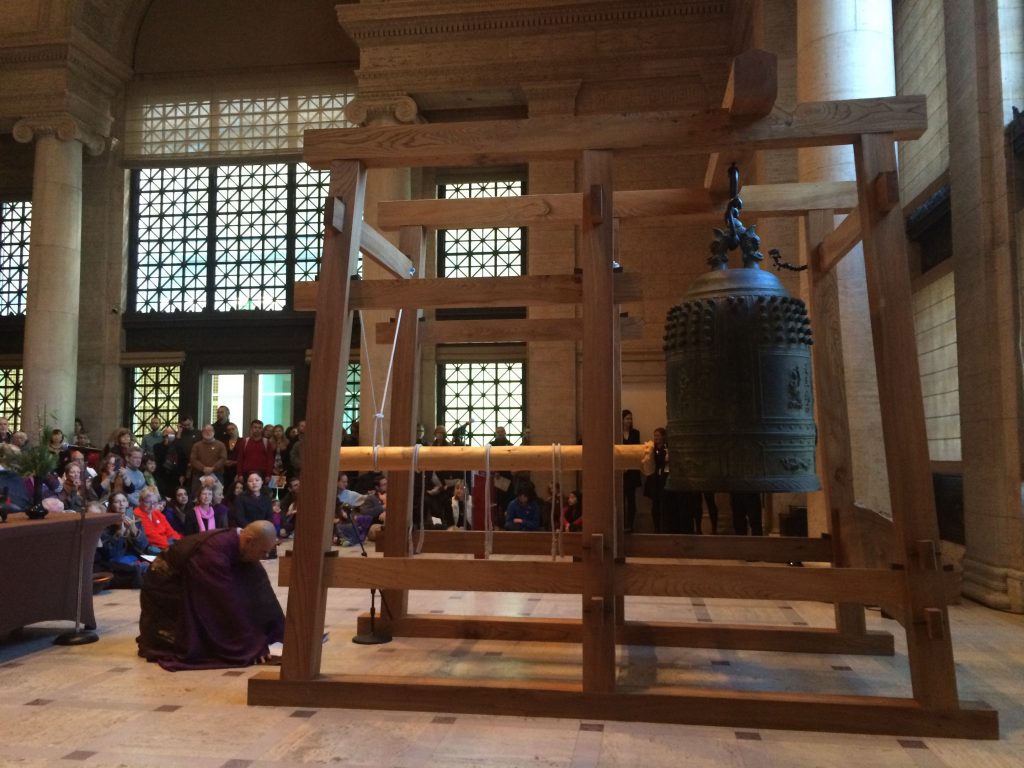 In Japanese Buddhist tradition, a bell is rung 108 times on December 31 to symbolize letting go of selfish qualities accumulated during the last year (Image by Ravi Chandra, 2015, Asian Art Museum San Francisco. See below for a link to this year’s virtual ceremony online.)

Ravi Chandra is a psychiatrist and writer in San Francisco. For fourteen years, he was lucky to have his MOSF posts published by the Center for Asian American Media, and now looks forward to broadening and building a diverse creative community and coalition through reflecting on culture and psychology for Eastwind ezine. Sign up for updates here, and see all the posts here. He writes from the metaphorical intersection of The Fillmore and Japantown in San Francisco, where Black and Asian communities have mingled since the end of the incarceration of Japanese Americans during World War II. He literally works there, between two Indian restaurants, go figure, though one has permanently shuttered during COVID. You can find him on Psychology Today, Twitter, Facebook, Instagram, YouTube, SoundCloud, or better yet, in the IRL.