How did you feel when you first encountered the Vietnam Veterans’ Memorial in Washington, D.C.? It’s a simple design with two tapered walls meeting at a 10-foot high apex with over 58,000 name of U.S. servicemen and women who died in the war known as the Vietnam War in the U.S. and as the American War in Vietnam.  Your reflection stares back at you on the polished black stone. Your face intersects with the names of the dead, offering a stark and sobering reminder of death’s finality. As one walks along the tapered wall, the swelling number of the dead engulfs you and the hushed tone is often punctured by murmurs of recognition, stifled cries and whispered conversations. 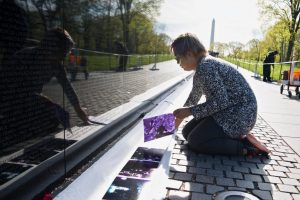 Artist/organizer Keva Bui (they/them) places his photographic essay on Viet Futures at the Wall. Photo from the Missing Piece Project.

Designed by 21-year old Yale undergraduate Maya Lin, the memorial stirred great controversy for its understated aesthetic. Some critics interpreted the black stone which cuts into the earth on the National Mall as a  “a gash of shame.” A more traditional sculpture of three soldiers was erected nearby to assuage critics.

Over three million people visit the Wall each year.  And over time, 400,000 objects ranging from photographs to large-scale art pieces have been left at the memorial and archived by the National Park Service.  Only six of those pieces are from Vietnamese people.

While not downplaying the need to acknowledge the U.S. servicemen and women who died there, there is another story that must be told.  An invisible wall hugs the earthen embankment where the Wall rests. This mountain of sorrow and remembrance offers silent testimony to the estimated 2.5 million Vietnamese, Cambodian, and Lao civilians who were killed during the nearly 20 years of US involvement in Southeast Asia.

Thus, the Wall we see today is just one part of the larger story.  The Missing Piece Project was initiated in 2018 by members of VietUnity-Los Angeles who brought objects and artworks to the Wall.  On April 30, 2020, which will mark the 45th anniversary of the end of the war, they will return once again to stage an art/history/memory intervention at the Wall. 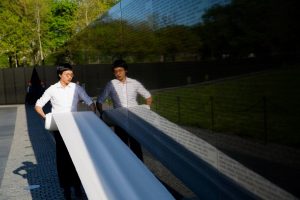 In the following short videos, which are taken from TheMissingProject.org website, you will hear directly from some of the artists and organizers of the project.  More information about the project, including in-depth interviews with the participants can be found at diaCRITICS.org, an arts and cultural blog of the Vietnamese and Southeast Asian diaspora.  We want to thank diaCRITICS  for allowing us to use quotes from their interviews.  It is well worth your time to read their posts in their entirety: Memory Work:The MIssing Piece Project and Missing Piece Project Profile, Part 2: A Collective Interview

Introduction to the Missing Piece Project

Dr. Kim Nguyen Tran is an arts educator, ethnomusicologist, and community organizer based in Los Angeles. She teaches in the Asian American Studies Department at UCLA and in the Music Department at Glendale Community College. She is resident ethnomusicologist for the arts organization Bridge to Everywhere and leader/participant of the Missing Piece Project.

In the following short video, Dr. Tran explains the origins of the Missing Piece Project and the valuable role it can play as it adds nuances to the public’s understanding of the Vietnam/American War.

In this short video, Antonius Bui (they/their) explains the how the khan tang, a Vietnamese funeral/mourning fabric, that they/their placed along the length of the Vietnam Veterans’ Memorial serves as a platform for multiple stories and homages to the experiences of Asian people who were affected by the American War.  They/their proudly identifies as a queer, gender-nonbinary Vietnamese American artist.  Bui graduated from the Maryland Institute College of Art with a Bachelor’s of Fine Arts in 2016. They/their has received fellowships from Kala Art Institute, Houston Center for Contemporary Craft, Yaddo, and other art centers and residency programs.

In they/their interview with diaCRITICS, Bui placed the current art intervention at the Wall in perspective: “What would a memorial created for and by refugee communities affected by the war look, smell, sound, taste, and feel like? Powerful and necessary as our interventions are, our group is beginning to imagine a space of our own, one that isn’t censored by the systems at play.”

Fellow artist and filmmaker Lan Nguyen elaborated on Bui’s point in her interview. “None of our dedicated items directly criticize soldiers, but rather criticize systems of war and imperialism.  I would feel uncomfortable criticizing soldiers at a site that memorializes U.S. civilians who passed in the War, many of them sent against their will, many of whom were from marginalized backgrounds and were against the war themselves… If we had our dedication elsewhere, perhaps people would feel more comfortable talking about the war atrocities that U.S. soldiers committed to our Vietnamese people. Furthermore, why does the Vietnamese diasporic narrative need to be tied to the narrative of the U.S. soldiers? We already see this in history textbooks, which focus on the stories of U.S. soldiers and then add one sentence about Vietnamese refugees as an afterthought… I want our own section in the textbook, our own memorial, our own space for memory.”

The literary arts also play a significant role in the Missing Piece Project. In this short video, writer James Huynh explores the complicated adjustment that refugees undergo in the U.S. and the residual psychic toll. He reads from his poem “Trapped in Familiarity.” 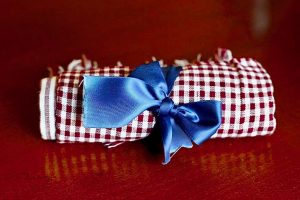 UCLA student Andrea Ng contributed an essay entitled “Has the War Really Ended for Cambodians” and a Kroma ក្រមាខ្មែរ (scarf).  In the essay, Ng draws upon the life story of her friend June Yihouy Bo, a Global Studies student at UCLA and international student ambassador for Cambodia. June Yihouy Bo was born and raised in Cambodia and her family suffered during the Cambodian genocide.  Her father was sent to a reeducation camp for eight years and emerged with serious psychological trauma. You can read the entire essay here: Missing Piece Project: Has the war really ended for Cambodians?

Andrea Ng addresses the significance of the Kroma: “The artifact that I want to contribute is a traditional red checkered scarf known as “Korma.” It is known by outsiders as the scarf worn by the Khmer Rouge. Before that it was common wear among Cambodians, and is now symbolic of the Cambodian post-war experience. It resembles simultaneous healing, as if to say that Cambodians, Khmer Rouge or not, are not divided as they are all healing from their own wounds.”

June Yihouy Bo added, “The younger generation wear it as a way to remember and stay connected to their Cambodian culture.  It always means something a little different for everyone, but ultimately the Kroma represents that we are not divided; we are all in this together.”

The final example of the types of art pieces placed at the Wall is Tiffany  Le’s installation that plays on the archetypal image the Vietnamese refugees aka “boat people.”  Le’s folded paper boats carry her family’s stories with drawings of all the objects and memories that they brought with them to the refugee camp in Malaysia and later to the U.S.

As an addendum to this article, I want to share this beautiful 10 min short documentary directed by Daniel Luu in which several of the artists including Kim Nguyen Tran, Keva Bui, Antonio Bui and James Huynh discuss their engagement with the Missing Piece Project.