This is the first year in 20 years that the Kotake family and friends will not be gathering in San Jose for the traditional rice pounding and making of mochi (rice cakes).  Neither rain or cold deters this hardy bunch from carrying on this ancient communal practice. But this year is different; we have a horrible pandemic to contend with and everyone needs to stay safe by being physically distanced (but socially connected), washing hands often, and wearing  masks in public. Since I have a lot of time on my hands under lockdown, I finally reviewed footage I shot at the 2018 mochitsuki and put together a video that is at the end of the article. Kyle Tatsumoto describes the process we go through at this mochitsuki. 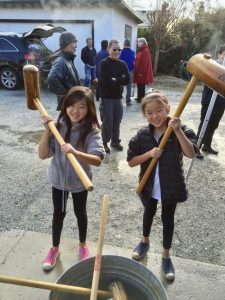 Donna Kotake also created a Blurb book which describes the historical background of mochitsuki.  The book is dedicated to the hard-core group of friends who are at the Kotake home at 6 am to set up the tables, boil the water, and prepare for the pounding and shaping of the mochi. We couldn’t do the mochitsuki without Brian Budds, Dianne Fukami, Carole Hayashino, Kerry Ko, Diane Matsuda, Mari Matsumoto, Gerry Nakano, Teresa Ono, John Ota, Kyle Tatsumoto, Sharon Umene and Ted Yamasaki.  We also thank Midori “Midy” Kotake who allows us to muddy up her kitchen floor as we go inside to heat up food or use the bathroom.

“The very first mochitsuki I can remember is when I was growing up on our farm on Sierra Road in San Jose, ” said Donna. “I was about seven or eight years old. There was a big wooden shed. I remember it was cold and rainy, and there was this big, stove-like heater in the shed.  In addition to my grandparents, many of my aunts, uncles, and cousins were there. We all ran around playing while everyone pounded mochi.”

Many years later, she decided to revive this family tradition. “For many years, I just bought my mochi from Benkyo-do,” wrote Donna. “Then in 1993, our family attended the Iida Family Mochitsuki. What a great experience – families coming together to work and prepare for the new year. We decided that we wanted to start up the Mochitsuki tradition again.”

Donna Kotake describes the history and process of mochitsuki in her Blurb book:

In ancient Japan, rice was a special, valuable food used only for special occasions and holidays. Samurai warriors traditionally prepared special food (rice cakes) before battle. Typically, rice was offered as one of the first crops to the gods. Each grain of rice in the Shinto tradition symbolized a “Tamashii” (human soul), so pounded rice cakes represented millions of souls.

When the community hand pounded the rice using a kine (wooden mallet), each person could reflect on the gods’ blessings and the events of the previous year. The act of pounding and handling the rice was a self-purifying and self-reflective act.  The Shinto priest would offer the pounded rice cakes to the gods on behalf of the entire community. 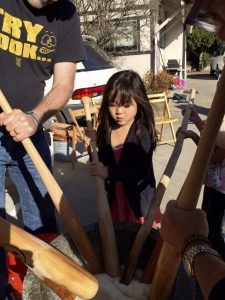 Kate Kotake and crew breaking up the rice with baseball bats. December 2013. Photo by Eddie Wong.

For the Japanese New Year, the mochi is shaped like the rounded disk of the traditional Japanese mirror, the kagami. The stacked rice cakes are called “Kagami Mochi.” Since ancient times, the mirror represented the Shinto Goddess Amaterasu Omikami, the Sun Goddess.

Kagami mochi is made of at least two stacked flattened mochi balls and is placed on a small raised tray called a “sanbo.” A sheet of white paper, a symbol of purity, is placed under the rice cakes. A small bitter fruit, typically a Satsuma mandarin orange, is placed on top of the rice cakes.  The fruit signifies longevity in its name, “dai dai,” meaning “generation to generation.” 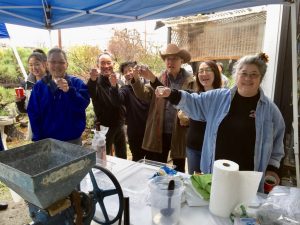 We have tarps to cover up the work station when it rains. From left to right: Lindsay Nakano, Myron Okada, Kyle Tatsumoto, Lia Shigemura, Kerry Ko, Donna Kotake, and Lynne Ogawa. December 2017. Photo by Eddie Wong.

Mochi rice (sweet rice) must be soaked for at least 48 hours prior to steaming it.  After the rice is cooked in the steamer, the mochi rice is mashed in a usu (mortar).  The mochi rice is smashed until the individual rice grains can no longer be seen. Then, it is pounded. (Note: A few years ago, we updated from mashing the rice with baseball bats to using a mochi grinder.)

The correct mochi strike is very similar to a sword strike. The kine (wooden mallet) must hit the rice flat, perpendicular to the usu surface.  If the mochi is struck by pounding diagonally, there is a good probability that the kine will strike the usu surface at an angle causing small wooden splinters to contaminate the mochi. After pounding, mochi is placed on a table covered with mochiko (sweet flour) and then hand shaped into small cakes.  The mochi cakes can also be stuffed with sweet beans or other items like blueberries.  The mochi’s elasticity symbolizes strength and the white color symbolizes purity. 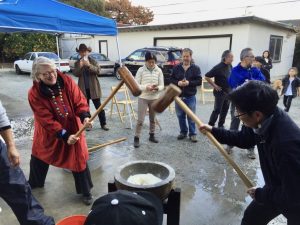 “We cherish mochitsuki because it is a time for family and friends to gather to share stories and food, ” said Donna. “We work hard, sip sake, and look forward to bringing in the new year.  We’ll be back in December 2021.”

Author’s bio: Eddie Wong is the editor/publisher of East Wind ezine. He is also married to Donna Kotake. 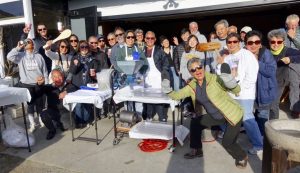