Intro:  We are pleased to repost Anu Kumar’s article of March 30, 2021 at Working Economics Blog at the Economic Policy Institute.. Please sign up to receive weekly updates on policy recommendations and progressive analysis focused on winning economic equality.

In the wake of the mass shootings in Atlanta on March 16, we must unite to decry the unacceptable hate and discrimination directed toward Asian Americans. But beyond immediate support and a commitment to justice, the Asian American and Pacific Islander (AAPI) community requires understanding and visibility. And this understanding—particularly with regard to their economic suffering from the pandemic—must be followed by policy, advocacy, and action.

The mass shootings that killed six women of Asian descent and two other people at Atlanta area spas have left the AAPI community in Atlanta and across the country in mourning and on high alert. While the man arrested for the murders has not yet been charged with a hate crime, the hate and discrimination being directed toward Asian Americans is an inescapable fact. According to Stop AAPI Hate, nearly 3,800 incidents targeting Asian-Americans were reported to the organization between mid-March 2020 and the end of February 2021. AAPI women were more than twice as likely to report hate incidents as men. And these incidents, which range from verbal harassment to civil rights violations to physical assault, “represent only a fraction of the number of hate incidents that actually occur,” a Stop AAPI Hate report said. 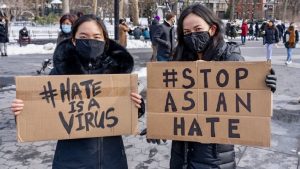 Advocates attribute the rise of hate and harassment of Asian Americans to the increasingly xenophobic language connecting the COVID-19 pandemic with Asian Americans. In reality, AAPI individuals are suffering under the pandemic, especially Asian American women.

AAPI women are working in industries and jobs critical to COVID-19 recovery that make them vulnerable to COVID-19. These AAPI female essential workers are vastly underpaid. On average, AAPI women nurses, teachers, wait staff, and cashiers make 11% to 21% less than white men in those jobs. Looking specifically at key health care services, 10.9% of AAPI women workers are employed in hospitals and nursing care facilities. But AAPI women who are registered nurses, for example, are paid 18% less than white men in those jobs.

Many AAPI women are also domestic workers, made vulnerable to the pandemic as they care for children, support older individuals and people with disabilities, and help households stay clean. Over half (52.4%) of domestic workers are black, Hispanic, or AAPI women. 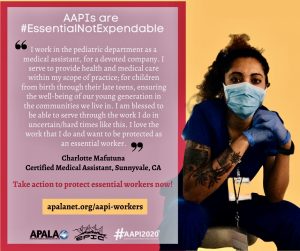 The AAPI community deserves allyship and support; they have been on the frontlines during the pandemic but are faced with hate and harassment. One way to support Asian Americans is by raising the federal minimum wage. Nearly 12% of the AAPI workforce would be affected by increasing the federal minimum wage to $15 by 2025. Additionally, this policy would improve wages for other women workers of color as well: The National Women’s Law Center finds that nearly 70% of tipped workers are women, and that Latinas and Black, Native American, and AAPI women are disproportionately represented among tipped workers.

Improving working conditions and protections for workers would also benefit AAPI individuals. The victims of the Atlanta shootings worked in spa and massage businesses, which made them vulnerable to both systemic and interpersonal abuse. These businesses can function as safe spaces but often contribute to low wages and an informal economy where workers lack protections when facing harassment or exploitation. 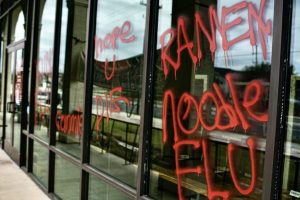 A greater understanding of the AAPI community and their economic realities is a critical part of standing with the community against hate and discrimination. The mainstream image of Asian American economic success in the U.S. is not wholly accurate. Asian Americans, like other Americans, come from all walks of life, and income inequality is rising among Asians in this country. The economic struggles of AAPI communities require attention from all of us.

Author’s Bio: Anu Kumar is the Omidyar Network Communications Fellow at the Economic Analysis and Research Network (EARN) team at the Economic Policy Institute. She supports communications efforts to connect the network and highlight efforts from the state-level policy research and advocacy organizations that make up EARN. Kumar has supported communications and editorial work at several think tanks in Washington, D.C., including the Council on Foreign Relations, the Aspen Institute, and New America. The Omidyar Network Communications Fellows Program is designed to place early-career communicators within economic justice organizations and issue-based campaigns. 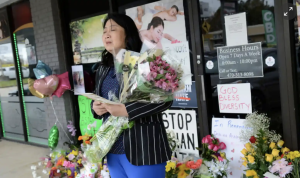