Ed. Note: We are proud to present Johnson’s Store, a short story by Charlie Chin.

The kids were excited.  As they drove down the highway, Makoto kept one hand on the wheel and use his free hand to point out the places he remembered.  The little town had put up a few new buildings since he had left, but he could still spot some familiar places.  As they passed a shopping center he commented, “That’s where the drive-in movie theater used to be.”  His daughter Keiko asked a normal question for a ten year old, “What’s a drive-in theater?

His wife was nervously pulling down the long sleeves of her blouse to cover the back of her hands against the bright California sunshine coming in through the car window.  She worried about developing liver spots.  She twisted around in her seat to check on their eight year son.The boy glanced at her and asked, “How much longer until we get to grandma’s?”

She corrected him, “Honey, you should call her Obāsan.”

Janice turned back to Makoto and went through the ritual of pulling down her sleeves again.

She talked to all of them at the same time, “Is it much further Makoto? Gary do you need to go to the bathroom?  Keiko, don’t put your fingers in hour mouth.  You’re going to get sick and have diarrhea.  You don’t want to have diarrhea, do you sweetheart?”

Without taking his eyes off the road, Makoto forced his shoulders down and twisted his head in an odd way that made a cracking sound in his neck bones.  It was a nervous habit he had when he wanted to release tension.  He checked the road signs. 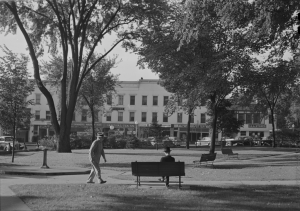 “The next exit is the one we want.”  The kids quieted down and Makoto began to see the ghosts of his high school years.  There was the overpass where he and Jimmy Oto used to sit and drink cheap wine that crazy summer.  The taco joint that he and Kimberly liked was still there.  Probably new owners though.  Miguel never would have sprung for the nice paint job.  He pulled into the exit and turn on to Third Avenue.

The big oak tree in the town’s central park where he and Kimberly Johnson had kissed was still standing.  She wore her corn silk hair in a ponytail that night.  They had left the gang at Miller’s Café and walked in the darkness to the park.  She smelled like hand soap and violets.  When they stopped in the shadows under the oak tree, she leaned forward with her eyes closed and her lips pursed.  For a second, Makoto was paralyzed by the immensity of the moment, his first “real” kiss.

Her lips were soft and she made a kind of muted moaning sound as their lips fumbled.  It struck him that this was probably her first “real kiss” also.  Clumsily at first but gaining confidence with each embrace, they began to touch, to kiss, and to whisper each other’s name.  They didn’t see or hear anything else and lost track of time.

Kimberly’s father and older brother had been driving around town looking for her since ten o’clock.  They spotted the couple from the north side of the park and jumped out of the car cursing.   The first couple of punches confused Makoto and by then, it was too late to try to defend himself.  As he lay on the ground trying to cover his head with his arms and evade the stomping kicks, he could hear Kimberly screaming.

“Stop it!  Stop it! We weren’t doing anything.”  But her father and brother grimly went about finishing their work.  It was a minute or two before Makoto realized they had stopped beating him up.  He chanced sitting up.  His face was all wet.  He looked down at his shirt and saw that it was bloody.  And that the blood was coming from a wound on his head.  He tried to get up but his legs weren’t working.  He rolled over to watch the men dragged Kimberly away to their car.  Her father had a firm grip on her jacket with his left hand and was slapping her face with his right hand.  He was striking her so hard that it sounded like gun shots.  He kept shouting the words as if he didn’t believe it.

Kimberly was crying and screaming hysterically,

At the hospital, Makoto lied and said the cut came from falling down in the darkness and hitting his head on a sharp rock.

Kimberly didn’t come to school for a week.  When she did come back to class the swelling on her face was still visible.  Makoto tried to send her a note through a mutual friend but she was so terrified, she wouldn’t even touch it.  He felt helpless.  The year passed and he lost interest in school.  He started coming home late and drunk.   Conversations with his parents turned into shouting matches and finally one day, he just left. 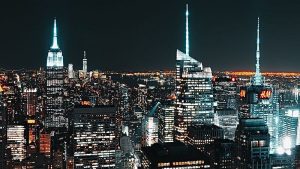 He ended up waiting tables in New York City at a sushi bar.  He got lost in the New York s scene and a couple of years rolled by.  He saved a few bucks and went in with some other waiters on a small Japanese restaurant in the Wall Street area.  The place did O.K., mostly lunch, but steady.  Then one day a smartly dressed Asian American woman walked in and asked if they needed somebody to do the flower arrangements.  She gave him a card that said, “Janice Sakai. Interior-Decorator.”  Even though the place didn’t need flowers, he kept hiring her every week until he got up the nerve to ask her out on a date.

Two years later, they were married.  When the kids came, they moved to the upper West Side.  Then one Christmas his mother tracked him down by calling every Takata listed in New York City to tell him his father had passed away.  Makoto promised to come home soon, but something always came up.

Now after more than twenty years, he was going back, a middle-aged man with a wife and family.  As he turned the car into the driveway of his mother’s house, he reached up and touched the old scar on his left temple.   He always thought it was strange that cuts on the head bleed so much.

The house door opened and a grey-haired women stepped out.  He was shocked at how physically small his mother appeared.

“Makoto.”  The tiny woman was wiping away tears.  He went up to her and gave her an awkward hug.  He turned back to the car and motioned for his family to come out.  There were shouts on both sides, “Obāsan,”  “Gary, Keiko, so big already.”     After a big dinner, they all settled down in the living room to look at old photo albums.  His wife mentioned that Keiko had been to the bathroom three times.

He spoke to his mother, “Mom, Keiko is not feeling well.  Something she ate at the airport I think.  Is there any Pepto Bismol in the house?  His mother thought for a moment and then stood up abruptly,

“I don’t keep in the house, but I go to Johnson’s Store. They got there.”  He waved his hand slowly motioned her back on to the old sofa.

“The store on Cypress and Delaware.  You know where.   You went high school with the daughter.”  Makoto stopped at the threshold of the doorway and turned around.

Makoto stepped onto the street.  Before getting into the car, he pushed his shoulders down and twisted his neck in an odd that made his neck bones crack.

Author’s bio: Charlie Chin is an author, singer/songwriter, and master storyteller. He served as the Community Education Director at the Museum of Chinese in America in New York City and as Artist-in-Residence at the Chinese Historical Society of America in San Francisco. He is the author of several children’s books, including China’s Bravest Girl (1992) and Clever Bird (1996). 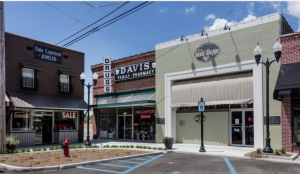