Dr. Dawn Bohulano Mabalon left us with a legacy that will inspire us today, tomorrow, and forever.  She was known as a fierce advocate for preserving Stockton’s Little Manila, an emphatic educator whose works on Filipino American history influenced thousands of students, a spoken word artist, a filmmaker, a beloved baker of biko and ube cupcakes, and much, much more. Her award-winning book Little Manila is in the Heart: The Making of the Filipina/o American Community in Stockton, California (Duke University Press) is now in its 6th edition.

On December 8, 2018, her life and legacy were celebrated in San Francisco at Bindlestiff Studio at  a benefit for Little Manila Rising, the community organization she co-founded with Dillon Delvo. 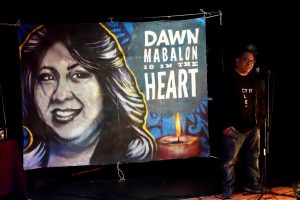 I’m a newbie to the world of hip hop and Filipino American culture, but what I saw that night fuels my desire to learn more. The place was lit – artist and audience locked in tight, swaying in time buoyed by rhythm and rhymes, singing praise to a beloved sister. I hope you can catch that spark just by watching the Jericho Saria’s videos because it is those sparks that ignite a sense of common purpose and community.  Those sparks nurture us as we continue to struggle for social justice. 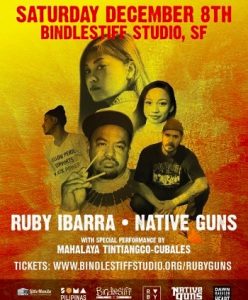 I also want to thank Oliver Saria of Bindlestiff Studio for his gracious hospitality.  Robynn Takayama, thank you for suggesting that East Wind Ezine cover this important event.

For more information about Dr. Dawn Mabalon, check out this memorial produced by TFC Balitang America.