My parents’ restaurant in Oakland, California’s Chinatown wasn’t doing so well in 1954, so 13-year-old me, a waiter when I wasn’t in school, had quite a bit of time on my hand, especially during languid afternoons on weekends.

There was always an Oakland Tribune, the hometown newspaper, sitting on a spare chair, and I had gotten into the habit of leafing through it daily, especially the sports pages. 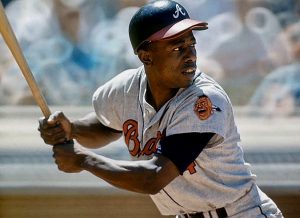 I had become a sports fan years earlier, in the late 1940s. I wasn’t yet fully engaged working at the restaurant, so I listened to the radio at home. (Our household didn’t get a TV set until 1952.) Among my favorite programs were football games played by the University of California at Berkeley (“Cal”). Occasionally, I loved going to see the Oakland Oaks minor-league baseball team play in neighboring Emeryville. I loved playing football, baseball, and basketball with my Chinatown buddies at Lincoln Square Park next to Lincoln School, a few blocks from our house and restaurant. 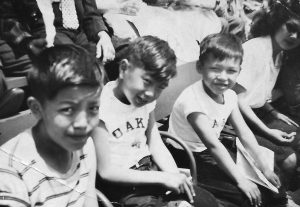 So I was ready in 1954 to read about Hank Aaron, when he started his Major League Baseball career with the Milwaukee Braves. And I was deeply saddened to read about his death earlier this month at the age of 86. (Ed. Note:  Go to the end of the article to see the ABC Evening News Tribute to Hank Aaron. It captures many aspects of his life as an athlete, business leader and philanthropist.)

Only 20 years old in 1954, Aaron was making a mark as a rookie and I was taken by what little I could learn about him through the Tribune’s sports pages. Nerdy me focused on the box scores of the Braves’ games, searching for how Aaron performed in the game the day or night before. Those printed box scores – featuring core baseball statistics such as “at bats,” “runs,” “hits,” “runs batted in,” and “home runs” – were in teeny print, but my eyes were much sharper then than they are now.

That obsession was a real-life lesson in basic mathematics. Every day, I’d add up his numbers in his latest game and calculate his batting average, dividing his “hits” by his “at bats,” which yielded his batting average. A batting average of .300 (three hits out of 10 at-bats) is considered good in baseball. Great practice in long division! (Don’t get the idea I became a math whiz. Contrary to stereotypes, I’m mediocre at best at simple math, and getting less so by the day.)

In the 1950s, there wasn’t much video or film of sports, but what I did see of Aaron playing dazzled me. His swing of the bat was whip quick. His gait around the bases after hitting a homerun was easy, fluid, unhurried, smooth and silky. His catching fly balls – he played as a right fielder – was almost effortless. He became one of my earliest baseball heroes, even though he played for a team I otherwise could ignore in a place I knew nothing about and without me having a chance to see him play in person. 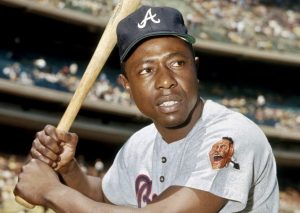 That he was a Black man meant nothing to me, a Chinatown teenager naïve about the racialized world near and far. He played his first Major League game seven years after Jackie Robinson famously broke the racial glass ceiling in the sport. I didn’t know about the discriminatory treatment he and other Black players had to endure.

Chinatown kids like me had some exposure to Black and white people, even though our cozy enclave was pretty much isolated from the rest of Oakland. Our restaurant had a mixed clientele, mostly Chinatown Chinese and other Asians, but also white and a few Black customers too. Lincoln School was heavily Chinatown Chinese children with some Japanese, Korean, Filipino, Mexican, Black, and white students as well. There may have been some racial tensions, but I don’t remember any of consequence. And I certainly didn’t know about the burgeoning civil rights movement in the American South, with historic incidents like the lynching of Emmett Till and the bus sit-in of Rosa Parks, both in 1955.

Aaron went on to a spectacular career in baseball, becoming one of the best players ever. Twenty years after his start, he was really big news. He was chasing perhaps the most hallowed baseball record, the 714 home runs hit by George Herman “Babe” Ruth decades earlier.

By then, I was a newspaper reporter with The Wall Street Journal in San Francisco. I had started as a sportswriter for my high school newspaper. In college, at Cal, I became sports editor of The Daily Californian at the tender old age of 18. But shortly thereafter, I moved to the more serious “news” side and never attained my dream job as a professional sportswriter. 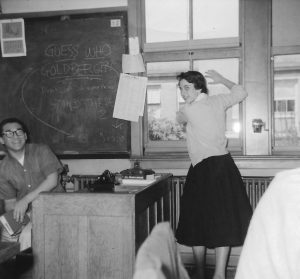 Aaron’s pursuit of the Ruth homerun record in 1974 was riveting. By then, TV broadcast games live so even those of us in California could see a game played thousands of miles away. Early that season, now playing for the Atlanta Braves, Aaron tied, then broke Ruth’s record, an occasion of exuberance and embarrassment, the latter in the sense that Aaron received lots of hate mail and death threats to him and his family. Many baseball fans were (and still may be) racists as the day is long.

Tributes have poured in after Aaron’s death was announced. For much of his life, he was subjected to racial hatred, but still carried on with quiet excellence throughout his 23-year career and many years as an official in the Braves’ organization.

These are fascinating times in America for racial issues, which have always been there even before our country became the United States of America. In November, most of us voted out an incompetent, racist president and elected a decent (white) man, who chose as his vice president the first woman and first Black and South Asian (and a native of Oakland!). The outrageous police killing of George Floyd last year ignited a racial reckoning that still resonates. The racists are still out there, however, egged on by the pathetic narcissist who just lost the presidency.

Racial dynamics in professional sports have taken their own twists and turns. Aaron was among an early contingent of Black players breaking the whites-only barrier. Today, one hears worries that the sport is losing Black players. The once all-white football and basketball leagues are now majority Black. Ownership and top management (presidents, general managers, head coaches, etc.), though, remain overwhelmingly white men. 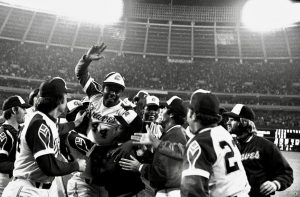 We yellows are practically invisible in the major sports leagues. Jeremy Lin broke a color barrier becoming the first Asian American in the NBA, and he’s now back with the Golden State Warriors, hoping to revive his career after that exhilarating Linsanity month in 2012. (Yao Ming preceded him, but he is China-born and bred.) Baseball’s most famous Asian American is a woman, Kim Ng, the recently named general manager of the Miami Marlins. That is a very big deal. In the NFL, many Pacific Islanders (mostly of Samoan descent) have been important players for many decades, but very few of East Asian descent have played. There are a couple of Chinese billionaires who own pro sports teams.

Henry Louis Aaron’s life and death should speak to us as an example of grace and dignity despite ugly racial hatred when he was the best at what he chose to do. For sure, he was a better person than his haters. And for this yellow guy who idolized him, that is how I shall remember him.