The legend and influence of Superman extends far beyond Krypton and Metropolis. As the Man of Steel, he embodies the cultural ideal of masculinity, charisma, and the people’s hero. In 1940’s Superman #4, he even told young readers to “get into the habit of reading at least one good book a month” (Tilley). Audiences of all ages swooned. This is no surprise though – he is Superman.

Created by Jerry Siegel and Joe Shuster, Superman (or Clark Kent)’s first appearance came in 1938. The character has become the most recognizable within the DC Comics franchise and has been adopted to radio serials, movies, and television shows.

Enter Gene Yang, author and cartoonist of American Born Chinese (2006), Boxers and Saints (2013), New Super-Man (2016-2018), and his newest series, Superman Smashes the Klan (2020). No stranger to inserting historical and socio-political commentary into his work, his newest series dives straight into the heart of America’s racial complex. Inspired by 1946’s radio show “The Adventures of Superman,” Superman Smashes the Klan takes the classic superhero tale to new heights, transforming the epic hero’s journey into an unexpectedly realistic one filled with insecurities about assimilation and acculturation. Aided by the beautiful illustrations from Chifuyu Sasaki and Naoko Kawano, the blend of manga and American comics compliments the cross-cultural narrative perfectly.

Set in 1946, Yang grounds readers in the dark reality of Metropolis with the villain, Atom Man, as he curses “American scum.” On his chest sits a Kryptonite swastika. After this match with Clark Kent, better known as Superman, readers are introduced to the Lee family, newcomers from Chinatown. Siblings, Tommy and Roberta (or “Lan-Shin”) Lee see this opportunity differently. Tommy is eager to make friends and get involved with the baseball team while Roberta finds comfort in speaking Cantonese and wearing a jacket made by her mother. Together, the family faces curious looks, ethnic slurs, and fears of foreigners taking over.

Unfortunately, the Ku Klux Klan has even infiltrated Metropolis citizens. Driven by fear and superiority, one KKK follower shakes his head in frustration, swearing their beloved city “wants to be the blasted league of nations or something.” Much like the real world, their terrorist tactics range from burning crosses to planting bombs in school clubs. They fight for “their love for the nation,” determined to defend it from racial impurity and inferiority. Yang further complicates this understanding with teenager Chuck Riggs. With his uncle as the leader of Metropolis’s KKK chapter, he serves as an early antagonist. When he finally begins to accept the Lee siblings as friends, Chuck struggles to understand his family’s role in a group filled with hatred. He heartbreakingly admits a simple truth: “I want to know that my family isn’t evil.” 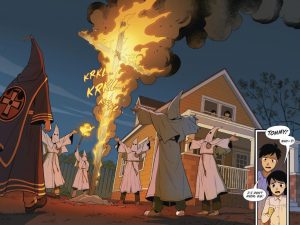 When Superman is not defending Metropolis, he’s busy facing ghosts of his past. Taunted and feared by Smallville residents, Superman wishes only to be ordinary. He learns to downplay his supernatural abilities in order to appear less intimidating to humans. When his supernatural abilities are exposed, a character argues that Superman is certainly far superior to everyone else and does not need to care for anyone (like the Lee family). Instead of agreeing even the slightest, Superman diplomatically states, “I take care of my own… We are bound together by the future.” Even though everyone has different backgrounds, everyone is bound together by the shared experiences they will share in the future to come. This ultimately is more important than our differences.

Meanwhile, Roberta Lee’s struggles with identity parallel closely to Superman’s as both attempt to assimilate. For Roberta, she, too, is on a journey of acceptance until she is presented a pen with the initials of her Chinese name, “LL” (Lan-Shin Lee). Its significance is not lost as it demonstrates not only the importance of being the writer of your own story, but writing about it with authenticity. For Chinese Americans, this is especially significant. The Lees work hard to assimilate by speaking primarily English, poking fun at themselves, and being model citizens. These are expectations people of color both in the book and in real life have to deal with on an everyday basis.

Throughout series 1 to 3, both Superman and Roberta slowly feel more inspired to be their authentic selves even when they dress the part of “hero.” Superman finds comfort amongst the unique circus characters while Roberta finds solace in the jacket her mother sewed from Superman’s cape. In their “costumes,” they appear bolder, stronger, transformed. This is the best version of themselves. Throughout their story, Superman and Roberta encourage each other to embrace their identities, be true to who they are, and be kind to themselves. Even in adulthood, this is a message we all work towards. 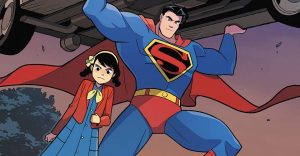 Within the city, the citizens are just as diverse as their stories. Initially upon meeting, the Lees tell Chief Police Inspector William Henderson, a black man, to “get out of here.” However, it is only when they realize he is an authority figure do they respect and apologize to him. Chief Henderson understands and empathizes with the Lees because he recalls his family has dealt with similar difficulties upon arrival in Metropolis. Tommy and Roberta’s friends hang out at the Unity House as a reminder that they are all united in their struggles and accomplishments. Even when Superman reveals he’s an alien, it is the children who defend him, seeing him for the hero he is.

Throughout Superman, Yang, once again, demonstrates his master storytelling. His ability to weave familiar feelings with marginalized histories is awe-inspiring. Even minor characters act on subtle microaggressions. As readers, we learn about the social hierarchy inside and outside of Chinatown. We’re briefly introduced to the onscreen villain, Genghis Ahkim, a reminder of Hollywood’s negative representations of Asians on the big screen. Yang reminds us of the similar reactions between aliens and alien citizens. The small details Yang includes are both relevant and tangible. It’s a breath of fresh air to realize that even in a world of superheroes, the world needs social movement and community action. 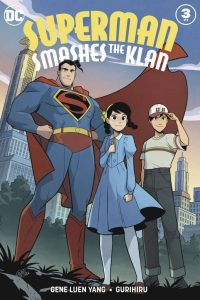 In a time and place where our country is more polarized than ever, Yang reminds us that we need more people like Superman, Roberta, Lois Lane, Tommy, and even Chuck Riggs. When we understand and accept our histories, we can begin to change the fate of our futures. We have a chance and a choice to change, and it’s up to the superhero in us all to do so.

Author’s Bio: Born and raised in San Francisco, Katie Quan (she/her) is a third generation Chinese American. She is the creator of GenerAsian, an illustration-based web series. Her work has been exhibited in Overachievers Magazine, SF Zinefest, Kearny Street Workshop, Asian American Women’s Artist Association, and Chinese Historical Society of America. Her newest creative platform, This Asian American Life aims to give voice and cultural identity to emerging artists.