There are many Get-Out-The-Vote (GOTV) efforts in play at this crucial period prior to the election on Nov 3.  It is imperative that we remove Trump from the White House because his re-election would surely mean a rightwing lock on the Supreme Court and more rollbacks on gains won by women, people of color, labor, LGBTQ communities, and environmentalists. We will need a massive turnout of the progressive vote in the swing states to Dump Trump and a huge Democratic vote to win back the U.S. Senate. 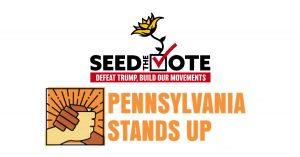 Seed the Vote stands out among all the GOTV efforts because they partner with local organizations in three key states:  Pennsylvania Stands Up, New Florida Majority and LUCHA (Living United for Change in Arizona).  These organizations are membership-based organizations that work across many issues: environmental justice, criminal justice, gender justice, employment opportunities and voting rights.  They existed before the 2020 election and they will be hard at work after Nov. 3.

Trump won Pennsylvania by 44,292 votes and the Biden/Trump race there is currently a tie. Trump carried Florida by 112,911 votes in 2016 and the race for president is currently a tie. Biden is slightly favored to win Arizona and there’s a tight race with Democrat Mark Kelly seeking to oust Trump lackey Sen. Martha McSally. Thus, there are plenty of reasons that we must flip those states. 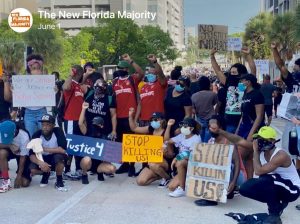 The videos at the bottom of this page will give you a quick look at the origins, strategies, and working process of Seed the Vote and its youth leadership development sister program, Generation Rising.  The first video features Kimi Lee, a volunteer, who explains the history and work of Seed the Vote. Amisha Chowdhury, an intern/fellow with Generation Rising, shares how training volunteers of all ages and backgrounds empowers young organizers of color.  The second video shows Seed the Vote in action and serves as an orientation for volunteers.

Seed the Vote encourages volunteers to recruit friends and family members to create a pod or circle of folks who will meet up on Zoom for a phone banking session.  One of my friends, Pam Tau Lee, veteran activist and movement leader, said, “Doing it (phone banking) with friends is great. You have a chance to chat with each other and say, ‘well, that was an awful call.” I can’t imagine anyone not wanting to talk with Pam, who is down-to-earth and friendly. “I had six conversations out of 21 calls in 90 minutes,” said Pam. 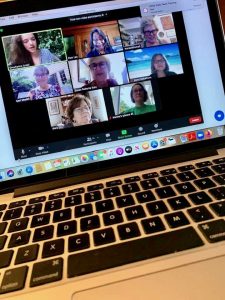 Pam Tau Lee and friends aka The Pod on a Seed the Vote phone calling session with Pennsylvania voters. Photo by Pam Tau Lee.

Kimi Lee reported that 75 volunteers made 10,000 calls to potential voters in Arizona recently one weekend.  For those who hate making phone calls like me, Kimi reminds us, “Because of the pandemic, many people are home and they are willing to pick up the phone and talk.” Since door-knocking is out of the question, a real-time conversation with voters is the next best thing. It has proven effectiveness in voter turnout.

Unlike other groups who just target Democratic voters, Seed the Vote works with the local organizations to identify individuals who typically are not contacted by campaigns, e.g. immigrants, youth, and communities of color.  These local organizations create the targeting for Seed the Vote volunteers and tries to persuade individuals to register to vote and to know that every vote can make a difference between more repression or less repression. Phone banking sessions are also available for Spanish-speaking volunteers. 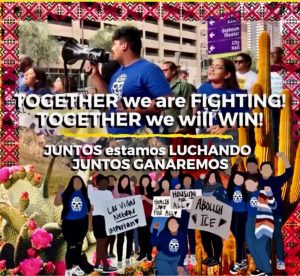 There are literally opportunities every day for you to call a swing state via Seed the Vote.  Go to Seed the Vote sign up.

Seed the Vote also works on a voter outreach effort specifically to the Asian American community via PA Stands Up.  Go to API Political Alliance sign up.

There’s no time like RIGHT NOW to make a commitment to contact people in swing states.  Due to the pandemic, many states are adopting vote by mail programs and those ballots begin to be mailed out in October.  Some states such as Pennsylvania allow absentee in-person voting from Sept. 14 to Oct. 27. Contacting folks by phone can truly make a difference as many people are unaware of where to vote and where to take their ballots as there are fewer polling sites.

A huge voter turnout will put added pressure on state officials to keep the vote count honest.  Because Trump and the GOP are trying to suppress the vote, we must redouble our efforts NOW. 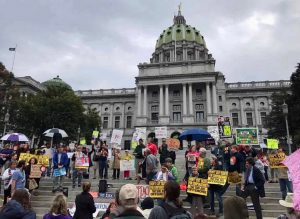 PA Stands Up rally at Harrisburg, PA. Photo from website.