Editor’s Note:  As the pandemic continues to sweep across the U.S., the infection rate and fatalities are staggering for working people and communities of color. The lack of public investment in our health care system left us unprepared. The crisis is worsened by the ignorant, callous pronouncements of President Trump.  As we fight for our right to live, David Monkawa urges us to imagine the health care system we truly deserve.

We need Medicare-for-All (MFA) now for the 38 million Americans with no health insurance. It would save $300 billion a year and everyone would be covered from cradle to grave. An overwhelming majority of Americans want it except the leaders of both parties. If we had MFA before the pandemic thousands of lives may have been saved.

MFA would be huge but the long-term goal must be to transition from a “single-payer” system to a “single-standard-of care” system that would eliminate disparities in the quality of care regardless of income or color. In order for such a healthcare system to survive the US economic and political system would need changing. 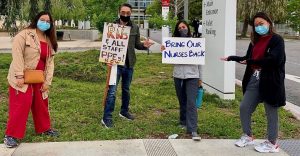 Public schools are city wide or regional “single payer” entities. But as long as inequality remains between Beverly Hills and south-central L.A., standardized test outcomes as well as health outcomes will remain unequal.

Many of the European Union’s (EU) health systems, like the United Kingdom’s (UK) National Health Service (NHS), is operated by the government and provides universal care for all. However, in the past decades rightwing white supremacist and anti-immigrant movements have gained power in the EU. This could accelerate privatization schemes that outsource housekeeping or other ancillary services in the UK. Sweden has an excellent healthcare system. In a twist, the rightwing racists want to keep their welfare state intact, for white “Swedish citizens”.

In these capitalist countries, public treasures like the NHS are constantly under attack from privatization. Racism continues to fester because the system it’s rooted in hasn’t changed. The US and UK elites want public services like the NHS to be taken over by “competitive bidding” through trade deals like the TTIP1.

As long as unemployment, homelessness, industrial pollution, and white supremacist ideologies persist, racial capitalism will create many more patients than the number of doctors, nurses and beds needed to treat them. Single payer is a good launching pad for “Med-Equality-for-All”. We cannot win what we cannot see so here is one example.

The group that is key to improving the health of all of Americans is working people, especially Black, Indigenous people of color, (BIPOC) and LGBTQ peoples. This would include those nations and peoples of the state of Hawai’i and the current so-called 16 “territories and dependencies.” This would work based on the bottom-up unity built between white workers and BIPOC and their allies and the national mobilization to get it done.

There are other health disparities or contradictions such as between the southern “right-to-work”2 (RTW) states and the northern “union security” states. Health metrics from cancer to teen pregnancy are associated with lower pay and working conditions from 70 years of RTW laws and the legacy of Jim Crow. Contradictions also exist between rural and urban areas and within urban neighborhoods, but the first group covers the rest.

The land area of the target group including the Bureau of Indian Affairs reservations would be the size of Hawai’i, Idaho, Maryland and Vermont combined and involve almost 1 of 3 Americans.

Communities, peoples and nations would testify at local Dept of Justice (DOJ) Hearings to determine what redress, reparations and justice would be awarded overall, up to and including referendums on their future relationship with the US. The reparative healthcare program would be up to the US national health service to follow up. A hearing held in Southern Louisiana would have to figure out what to do with “Cancer Alley” in the Mississippi corridor where 30 petrochemical plants surround St. Gabriel township whose residents are mostly Black. 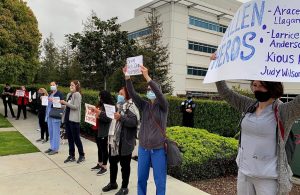 St. John’s 10 now reinstated after two protests in front of the hospital and thousands of phone calls from the community. Photo courtesy of David Monkawa.

In the sunbelt states, DOJ hearings would sort out claims and treaties of Native indigenous nations, Mexican-American people’s Chicano nation, and others who have historical claims. However, all would join to ensure that nuclear waste dump sites in Arizona and New Mexico are cleaned and closed first.

There are 6,000 medical centers in the US. 3,000 are private non-profits like Cedars Sinai in L.A., which are supposed to provide “charity care” in lieu of not paying taxes. 1,200 are public, including the Veterans Administration, a federal healthcare system. The remaining 600 are non-federal private psychiatric and 1,200 private for profit facilities.

It’s important to note that every hospital in the US, (non-VA) receives 33%- 40% of income from Medicare-Medicaid and other reimbursement programs. The US has an expansive infrastructure when private, public and non-profit facilities are all considered together. Currently it is a mess of disconnected networks with no central plan, competing against each other for “customers”, AKA patients.

The VA system, state and county medical centers and rural district hospitals would consolidate into a network where the staff, buildings, equipment and land will all come under the new health system. The idea of the democratic “community hospital” will be restored to private non-profits. Patients, community, medical staff and workers will replace bankers, insurance and drug execs who now dominate these one-time community boards.

The new federal government can assume all debt for past expansions but require medical centers to use their investments towards addressing the healthcare priorities for their communities. The boards of the remaining 30%, which are private hospitals, would also be democratized and join the national health system. Hearings will determine the compensation for shareholders.

The backbone of the system would be national network of decentralized, neighborhood clinics that focus on prevention, early intervention and easy access to primary care family doctors. They would also provide training on political advocacy and basic care to as many as possible, transforming community members into neighborhood-medics.

A few healthcare executive orders that cannot wait for things to develop.

Many more immediate executive orders can save lives each day. The DOJ will enforce these orders. Local health inspectors on patrol will issue citations to hospitals, pharmacies or nursing homes for quality care violations or improper pricing.

The major cities of both coasts and Midwest along with the Texas Medical Center complex comprise the large university affiliated medical centers which attract the most talented doctors, nurses, advanced research and funding.

Some doctors have revealed that everything they learned in medical school about sickle-cell anemia took 20 minutes, maybe. Curricula and research would expand to incorporate healthcare sciences from US indigenous people and countries of the global south. Outreach might involve the Mayo Clinic, in Rochester, MN visiting Standing Rock Clinic near Lincoln, ND, 512 miles northwest, home of the Lakota Sioux. The Mayo Clinic would incentivize talented healthcare staff to improve the health of the area with state-of-the-art technologies with the approval of local authorities.

Medical students would be less seduced by the fame and fortune of being a specialist nor chained to jobs they dislike due to med-school debt peonage. Incentives like “serving the most with the highest quality,” would be rewarded. 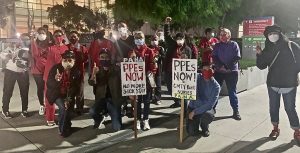 The definition of “health” would become broader. Physical, mental and spiritual well-being with one’s environment. This means all other systems such as energy, food production and recycling must develop along with it. A green energy system where flat surfaces are painted to become solar cells that power vertical farms in urban centers. Recyclable and biodegradable construction materials. These technologies are advancing now and would be an extension of our “health” in synch with nature.

For now, the US is arguably the most unhappy place on earth. The US leads the industrialized nations in suicides (and homicides), with over 48,000 a year. Ten million people seriously think about committing suicide. 21 million are addicted to some kind of drug. The 700,000 Americans who die of tobacco, alcohol, opioids and heroin each year are disproportionately BIPOC. Addiction and mental illness will be treated as public health issues rather than through incarceration.

Similar to physical health, mental health should be centered around the treatment of self-destructive behaviors which at their core are related to class, race and gender oppression.

Values such as “teamwork to benefit all”, will be taught in schools to replace market-based values like “individual competition to get ahead”. Research has linked climbing rates of “perfectionism” in the US to depression and anxiety from neo-liberalism’s false promotion of the power of individual entrepreneurship.

White standards of beauty, such as, light skin, straight hair, straight nose and big breasts are ingrained in the population. The US leads the world with14 million plastic surgeries. A $16 billion per year industry. This figure is four times greater internationally. The US as the most dominant country exports its standards of beauty globally. People have a right to cosmetic surgeries but also have a right not to be bombarded with youth obsession and sexist imagery.

Psychiatry for working and BIPOC would incorporate cultural, class and historical backgrounds of their patients. Doctors would learn about the history of violence in Honduras, to be able to gain insights into a Honduran immigrant who is a victim of domestic abuse in LA.

Healthcare multinationals and Big Pharma must not be allowed to bypass the democratic rights and endanger the health of the people of host countries through “trade policies” and other investment agreements. For example, when Uruguay’s people voted for a no-smoking law, Phillip Morris sued the country for $25 billion in “potential” profits lost.

The healthcare “brain-drain” from countries like the Philippines to the US could be eased if the US took assets from the healthcare industry and invested to transform military bases like Subic Bay into local green energy hubs that power public transportation and jobs. They would respect union rights and collective bargaining, close gender inequities and improve local conditions for the ongoing democratic movements of the Philippines. This would help to make right decades of lower pay and benefits paid to migrant Filipino healthcare workers by US companies and encourage health workers to seek local jobs.

The benefits of full equality in healthcare will not just impact BIPOC. When we are all physically and mentally well, it can release the energy for everyone to pursue breakthroughs in science, technology and the creative arts no longer restricted by the profit system. Med-Equality-for-All can produce a higher level of health and consciousness.

1-TTIP- Transatlantic Trade and Investment Partnership a secretive “trade” deal between the US and EU transnationals which increases the free movement of capital, goods and workers globally to benefit the transnationals.

2-“Right-to-Work” laws- These laws are pushed by the bosses to weaken the workers. They stop union members from making it mandatory for all fellow union members to pay dues to make the union stronger. Currently a majority of 27 states have “right-to-work laws”. Pay, working conditions and quality of life is lower in these states due to weaker unions.

Author’s Bio: David Monkawa is a member of the Progressive Asian Network for Action (PANA).  He is a longtime activist in labor and community struggles for equality and justice.