Few of Los Angeles Japanese know of Mayor Fletcher Bowron (1938-1953), fewer of us know of a square adjacent to city hall, and probably fewer of us know of his role in our lives. It was over a year ago that I first learned of the square. I had seen photos of the Nisei Week court at the city hall smiling with the mayor at city hall, but a L.A. Times article (5/20/1943) with a headline, “Bowron Hopes Jap-Americans Never Return to Los Angeles,” caused me to flippantly remark, “We gotta change that name!” 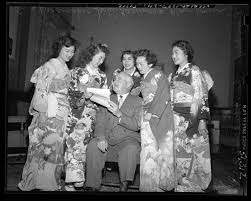 Across the country statues are coming down, buildings are renamed, flags are being redesigned, airports are renamed, products are dropping images and names, processes are being questioned, and budgets are being reassessed. People are seeking to correct the wrongs of the past for a more just and fairer society. We are learning histories that will change how we go forward. Within this momentum, I propose that we seek to remove “Fletcher Bowron Square” from city property and rename the square (located on Temple St. between Los Angeles and Main streets). Our imprisonment during WWII, stems from the same systems that rationalized stealing the land from and committing genocide (ethnic cleansing) against the indigenous people and instituting a system of enslavement, which to many, continues today. It is from the same system that took property from our Issei, shattered dreams of our Nisei, stripped many of their dignity, aspirations and self-respect, and continues to plague our community today. 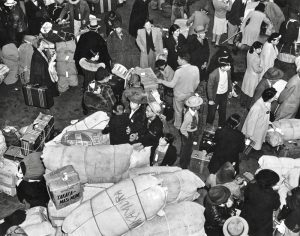 Fletcher Bowron, mayor of Los Angeles from 1938-1953, presided over the city with the largest population of Japanese in America, close to 60,000, (his number) and was a major force in shaping public opinion and government action in the removal of Japanese from the West Coast. In fact Bowron met with Gen. DeWitt on the morning DeWitt decided to move the Japanese from the Pacific Coast. Bowron observed that his statements, “may have been the last straw…and certainly it was an added consideration.”

Through his weekly radio broadcasts on KECA he shaped public opinion and influenced government policies. The quotes below are from his broadcasts. (Thanks to Martha Nakagawa for the transcripts of the radio broadcasts.)

All City employees of “Japanese parentage” were forced to take a leave because “some of the employees of Japanese blood were in positions where they could secure valuable information which, if passed on to the enemy, could be most effectively used in an attack upon Los Angeles.”

“I advocate the securing of land by the Federal Government in locations removed at least several hundred miles from the coast,…where they may be put to work…Because they are non-assimilable…because of the marked difference in appearance between Japanese and Caucasians, because of the generations of training and philosophy that make them Japanese and nothing else…set the Japanese apart as a race, regardless of how many generations may have been born in America.”

On President Lincoln’s birthday, “…there isn’t a shadow of a doubt but that Lincoln, …would make short work of rounding up the Japanese and putting them where they could do no harm.”

On how to deal with American citizens, “…we cannot deny them the rights and privileges and immunities of American citizenship…I suggest a Congressional Act classifying all persons…who are also citizens of nations at war with the United States…not entitled to citizenship.”

“When the war is over, it is hoped that we will not have again a large concentration of the Japanese population in Los Angeles. By that time some legal method may be worked out to deprive the native-born Japanese of citizenship…The Japanese can never be assimilated…they will never be a part of us. They are a race apart…that here in America…we want the word ‘American’ to stand for something that we honor and respect, that the Japanese can never be Americans in the true sense.” 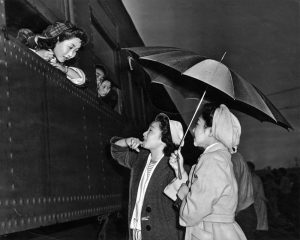 Bowron in 1946 at a banquet honoring Nisei veterans Bowron apologizes, “I have been convinced…the Nisei have been true. And they have come through the ordeal in such a way as to have earned the respect and confidence of their fellow Americans.”

Let’s join together to change the name! Sakura? Peace? Tongva? City of Angels? Any of these would be a welcomed change to its present name. 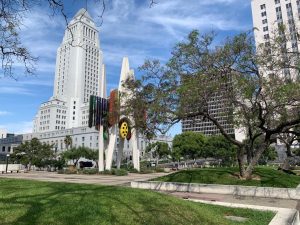 Let’s rename this public square to honor people who deserve it – Editor’s note.

He can be reached at snagano@aol.com. 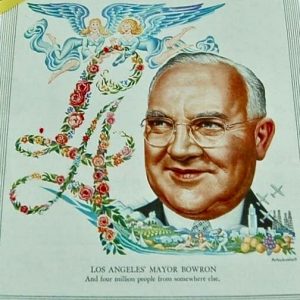