Editor’s Note:  Helen Zia’s op-ed piece appeared in the Washington Post on April 2, 2020. She graciously shares the full version of her essay with East Wind Ezine.

Though the wave of anti-Asian racism that looms in response to the global coronavirus pandemic is ugly and frightening, it is not new. I should know: I witnessed the harassment and violence Asian Americans faced in the wake of the collapse of the U.S. manufacturing sector in the 1980s.

Scapegoating Asian immigrants and Asian Americans did nothing to save the U.S. auto industry then. And it won’t provide the scientific advances and government leadership necessary to slow the spread of covid-19 now.

I had just moved to Detroit two years earlier, an idealistic twenty-something, leaving my Chinese immigrant parents in New Jersey to go to the industrial heartland, to be part of its famed labor movement.

Within two weeks of my arrival in the Motor City, I was hired at the Eight Mile Road Stamping Plant as a large press operator. The fact that I was Asian American, a rarity in Detroit then, didn’t seem to matter. I was paid about $10 per hour, more than six times the minimum wage I could get as a college graduate. For the first time in my life, I had medical insurance and was even able to buy my first new car–American-made, of course. All thanks to a thriving industry and a strong union.

But the Iranian revolution in 1979 put an end to all that. The severe oil and gas shortages that followed threw the auto industry into crisis. Suddenly I was out of work with millions of other auto and factory workers. Related supply chain companies and service industries, including restaurants and cafes, shops, nightlife– also shut down. 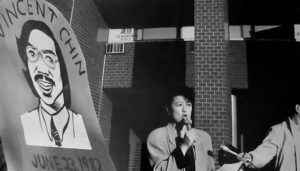 In a region dominated by one industry, no jobs were to be found. The economy tanked, with no end in sight. To get food stamps, people who had worked hard their entire lives were losing homes, weekend cottages, cars, recreational vehicles and all the accoutrements that a lifetime in high-paying, stable jobs could buy. Those kind of factory jobs disappeared as America restructured into a service economy.

Along with other once-productive people, I waited for hours at the unemployment office, in lines that snaked around city blocks in the freezing Michigan winter. Misery doesn’t begin to describe the depths of despair that infected everyone and permeated the once great industrial city and region.

Frustration, anger and outrage simmered, ready to blow. Meanwhile, politicians, CEOs, union bosses at first pointed fingers at each other, trying to deflect blame. Soon they found an enemy they could all agree on: Japan.

The Japanese auto industry, they said, was the source of everyone’s woes. We are at war with Japan, they declared, so we should drop nuclear bombs again. The enemy was hurting America by producing fuel-efficient cars when no one was buying Detroit’s gas guzzling dinosaurs. People who dared to drive a Japanese-brand car were shot at on freeways. Never mind that German Volkswagen Beetles were also popular– racism is a more effective tool when the enemy looks different.

Japan and anyone who looked Japanese became moving targets, not just in Detroit but throughout the U.S., as hate-filled rhetoric dominated the airwaves. Asian Americans, commonly seen as “all alike” in spite of widely diverse ancestries, were worried and frightened. I remember how people would stare at me, eyes filled with resentment for their pain. I never knew when someone might curse me with racist epithets, or threaten to get violent, even though I, too, had lost my job. Yet in those days, there was no voice that spoke up for Asian Americans and the racial harassment of that time; most communities could only suffer in silence.

In this racially-charged powder keg, our fears were realized as the anti-Japanese anger ignited. On a warm June night in 1982, two white autoworkers in Detroit bludgeoned to death a 27-year old Chinese American named Vincent Chin, on the night of his bachelor party. Witnesses reported hearing racial slurs and “It’s because of you motherf-rs that we’re out of work!”

The brutal beating death of Vincent Chin, compounded when his killers were set free on probation after never spending a full day in jail, triggered a national civil rights campaign, led by Asian Americans. Activists organized a multiracial, cross-cultural coalition, bringing Asian, Black, and White people of conscience from diverse backgrounds together to fight hate violence and to support justice for Vincent Chin. Together, they brought about improvements in the criminal justice system for all Americans– victim impact statements, for example, and laws that protect against hate crimes.

Today, the similarities between the anti-Japanese racism of the 1980s and the current anti-Chinese innuendo are chilling. Within the first two weeks of the national emergency, more than a thousand reports of anti-Asian harassment and violence have been tracked —including the stabbings of two-year old and a six year-old Asian American boys at a Sam’s Club in Texas. 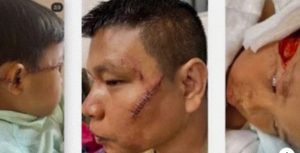 Bawi Cung Nung and sons with knife wounds after a racist attack at Sam’s Club in Midland, TX. Photo from Nextshark.com

Yet instead of condemning such attacks, we have a president and his supporters who actively promote xenophobia against Chinese, doubling down on racist rhetoric even when reporters point out the harm of their words to Americans of Asian descent who have nothing to do with the virus. These top officials ignore public health experts who note that the “Swine flu” H1N1 pandemic of 2009 originated in the US, infecting millions and killing hundreds of thousands worldwide.

I witnessed Detroit’s economic implosion and the racialized climate that lead to Vincent Chin’s slaying– and I am very worried. The same volatile ingredients are present today, a recipe for misguided anger to explode. There is real terror among Asian Americans that the assaults and hate crimes already happening will become much worse as many more people lose jobs — and lives. None of us can imagine the mood in our communities in the weeks to come, but today’s harassment, bullying, assaults and harm to people who “look Chinese” may be the tip of the iceberg.

Americans can do –and have done–better than this. After 9/11 in 2001, President George W. Bush warned the nation against Islamophobia. He didn’t stop hate crimes, but he set the tone from the White House that targeting Muslims was not acceptable. Bush later credited his friendship with his Cabinet Secretary Norman Mineta for opening his eyes to the xenophobia of the incarceration of 120,000 Japanese Americans during World War II.

To counter Trump’s divisiveness with his constant China-baiting and his praise of neo-Nazi white supremacists, other leaders need to speak out, as did the governors of New York and California, and the Asian American members of Congress. This week the Silicon Valley Leadership Group published a “Response to Recent Incidents and Rhetoric Targeting Asian Americans,” stating that 59% of their STEM workers are born abroad, and one in six is from mainland China, Hong Kong or Taiwan; their work strengthens this nation’s efforts to find medical vaccines and cures. 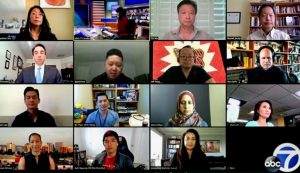 Americans of Asian descent need to know that their coworkers, neighbors, schoolmates will be their allies if they are attacked while buying groceries, walking the dog, taking the kids to the park. A recent report from the One Nation AAPI Commission notes that some 20-30% of the nation’s health-care workers, from doctors and nurses to home care attendants, are immigrants–and many are Asian American. They are on the front lines fighting Covid-19. Now the virus of hate puts them, first responders saving American lives, in double jeopardy.

In this time of uncertainty and dread, everyone is at risk. We must stop repeating history and prevent the scapegoating and prejudice that killed Vincent Chin, James Byrd, Matthew Sheppard, Balbir Singh Sodhi, Lori Gilbert Kaye and too many others. Division and violence weakens America, which is why foreign bots are actively stirring discord. With this terrible pandemic upon us, we must also fight the anti-Asian virus, and call on the best of American values to stand against bigotry, for human dignity, together.

Author and journalist Helen Zia was a spokesperson for the Justice for Vincent Chin campaign and has written books on Asian and Chinese Americans. Her latest book is Last Boat out of Shanghai. 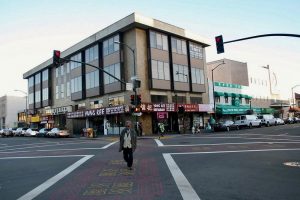