In the early 1990s, “hate crimes” directed at people of color and gays increased to over 60% against Blacks and overall 10% to 15% against non-whites.

The Reagan and Bush years took a heavy toll on affirmative action, labor rights, affordable housing and brought out the forces of racism and reaction in the Republican party as well as the expansion of neo-Nazis, and white supremacists at its fringe.

The US military interventions into Grenada, Panama and Central America has fanned up jingoism and anti-immigrant sentiment. The “scapegoating” of Japanese cars and anything Japanese was being blamed as the cause of the recession from the trade wars with Japan.

These factors were on a collision course with the wave of increased immigration of Asians to US cities where jobs were becoming scarce and city funds for basic services eroding.

Anti-Asian racism took two forms. Attacks and or harassment by racist civilians and by police. 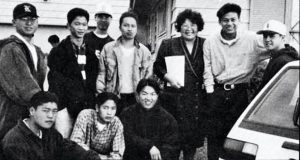 Japanese American, Vietnamese, and Korean youth united in front of the Kanshige’s home.

Three Japanese immigrant women were assaulted and beaten by five to six white women who yelled, “speak English.” Ms. Nakashita suffered a split lip when she was kicked. “Employees at the bar did not come to help us and made us wait for an hour before calling a manager to handle the situation,” she stated. The employees also allegedly discouraged the women from reporting the incident to police.

The women hired a lawyer to sue the restaurant, which had a record of previous similar lawsuits. The HB Police Dept. took notes and hadn’t made any progress. 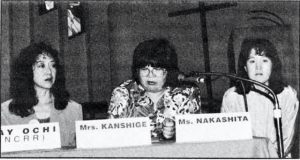 So, they came to Nikkei for Civil Rights and Redress (NCRR) to seek justice since the lawsuit could take a long time and was unpredictable.

NCRR took descriptions of the assailants from the women and produced a “wanted poster” flyer with a reward for information leading to the location of the suspects. NCRR visited the Red Onion with three people to post these flyers all over outside and in nearby spaces in a very public manner. As long as “wanted posters” are factual they are legal.

This practice had a positive impact. The community was able to contribute by pitching in for a reward. The three people who went to leaflet felt like they were able to fight back on behalf of the victims and the community. The suspects and the public got the message that the Japanese community will come after you with a reward offered if you assault any of us. The FBI told us that in most cases, suspects who are customers at an eatery will show up again. However, they were not enthusiastic about the community taking our own initiative.

Asian youth had been detained and searched with questionable “probable cause” by the police in Fountain Valley, CA in Orange County. The police were taking photos right on the street against a wall or squad car without permission or explanation and have assembled the photos in a binder designated “AGI” (Asian Gang Investigation). Cases of excessive force and physical abuse have been documented such as chokings and stomping on feet while being detained.

These acts could be a violation of civil and constitutional rights. There were far more white “skinhead” gangs than Asian gangs in the area, but they were not being photographed. The Asian mug-files was a racist practice that had to be abolished. 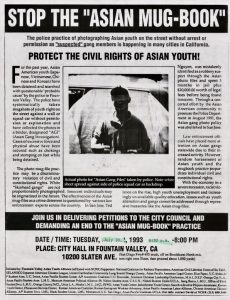 In San Jose, CA, Ted Nguyen, age 26, was mistakenly identified as a robbery suspect through the Asian mug-files and spent three months in jail and incurred $20,000.00 worth of legal fees before being found innocent. Through a concerted effort by the Asian American community to pressure the police department in August 1991, the Asian gang photo policy was abolished.

Law enforcement had placed more attention on Asian gangs statewide due to their increased activity. Although this is a concern for all, many racist and uninformed stereotypes of Asian gangs permeate the media and policemen’s minds such as “mysterious triads” or “secret society of yakuza” who are the overlords behind youth gangs.

The Fountain Valley Asian Youth Alliance (FVAYA), a chapter of the NCRR, was formed to combat these stereotypes and abolish the mug-file practice. “We believe that a closer working relationship with the community, more Asian officers and staff, more gang and drug prevention and recreational programs are needed to deter gangs,” stated members of the Alliance.

The random harassment of Asian youth and the mug-file practice jeopardized individual civil and constitutional rights and had not shown to be effective according to some law enforcement experts. 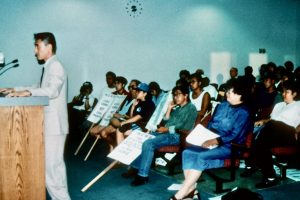 The Southern California ACLU filed a public records request against the Fountain Valley Police Department in an effort to find out what exactly was the purpose of the photos and other documents related to Asian gang policies. The police refused to disclose anything and conducted their own internal investigation of nine complaints filed by members of the Fountain Valley Asian Youth Alliance.

“We’re doing a petition campaign to the Mayor and City Council of Fountain Valley to abolish this practice. We are currently speaking to many organizations on campuses and in the community to gain more supporters,” stated Jason Kanshige.

The issue received broad support from community, campus, and civil rights groups of all nationalities.  A front page LA Times article, a Times editorial opposing the Asian Mug-files, a nationally broadcast on CNN and NPR segments as well as coverage in most ethnic newspapers helped to publicize the issue. By late 1993, the Asian Mug-File was being discontinued in California.

These two cases illustrate how international issues and the inequality created by the US economic and political system has an impact on our daily lives as people of color. 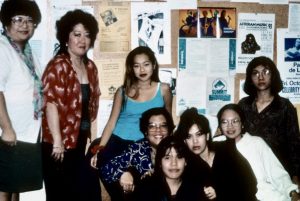 Back then, NCRR did not have overall demands for police reform or legislation for stiffer penalties for hate crimes, but the FVAYA goals were headed towards a “community control of police” concept introduced by Michael Zinzun, of Pasadena’s Coalition Against Police Abuse, at a conference on Police Accountability held at Cal State LA. He was a former member of the Black Panther Party which originally came up with the idea. Funding priorities, real subpoena power for a civilian review board, body cams, were all improvements that depend on strong community support to win and to keep. “Community control” lies at the core of the demand to defund the police.

Today, “community control” of police with civilian review boards and disciplinary power is the “gold standard” of mass demands nationwide for police accountability. We can learn much from the African American communities who have had to fight off both civilian and racist corrupt police in many cities especially in the South.

They pioneered, mutual aid groups, economic boycotts of businesses, civil disobedience at lunch counters and buses and fought the police and the Klan who were at times the same people. Rather than rely mainly on lawsuits, these actions with broad participation became the movement that propelled lawsuits and legislation forward. 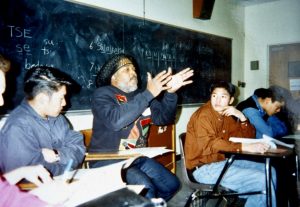 When collective “de-escalation” becomes a moot point with the rise of violent white supremacy, they formed armed self-defense groups such as the Deacons of Defense of Justice and later the Black Panther Party. In 2020, at least one individual store owner in San Francisco, Chinatown armed himself for protection while peacekeepers patrol the streets to prevent the violence inspired by lies that covid-19 is the “Wuhan virus”.

The legacy left by African American civil rights and Black liberation leaders is a valuable resource for Asian Americans and all people who are battling racist violence, both individual hate crimes and state sponsored violence by police.

Author’s bio: David Monkawa is an artist and member of the Progressive Asian Network for Action.  He also served as a former NCRR Co-Chair. 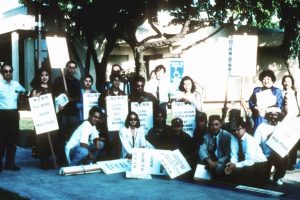