Pam Tau Lee is a veteran community, labor, and environmental justice organizer in San Francisco.  East Wind ezine is proud to present this series of short videos that cover how she became an activist and her thoughts about the challenges ahead as we strive for justice, equality, and sustainability of our society and planet.

In part one of this story, Pam describes how growing up in San Francisco Chinatown and the battle to save the International Hotel shaped her understanding of environmental racism and the need for environmental justice.

Part Two of the Profile of Pam Tau Lee, Environmental Justice Activist:  Women Workers and Soy Sauce Moments. When Pam was six years old, she witnessed an accident at her grandmother’s sewing factory. That incident laid the seed for her eventual labor organizing work.

Part Three of the Profile of Pam Tau Lee, Environmental Activist: Climate Crisis and Community. Pam speaks about the crossroads we face with climate crisis intersecting with the crisis of capitalism. The impact of climate change is already resulting in more pollution and threatens people all over the globe. How should we respond? What must we do? Pam offers some hope in these urgent times.

Bonus Video: The Chinese Progressive Association (CPA) participated in Asians Rise For Climate Justice Contingent as over 30,000 people marched down Market Street in San Francisco on September 8, 2018.  CPA also created one of 50 murals that day at Civic Center and convened a Climate Justice Tour of Chinatown on September 9, 2018. 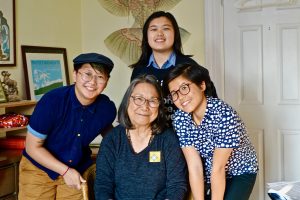 Connie Hsu – Connie was born and raised in Southern California on Tongva land and is a recent Bay Area transplant. They are passionate about issues of environmental justice, queer and trans justice, and solidarity economics. In their free time they like to brew tea and eat snacks.

Deanne Liu — Deanne was born and raised on the outskirts of Chinatown, on the traditional territory of the Ohlone people. She(/They) works on civic engagement and special projects at the Chinese Progressive Association. They enjoy talking about feelings and singing in English & non-English languages.

Nancy Truong – Nancy Truong is from San Francisco by way of Vietnam. They work at Chinese Progressive Association on youth organizing, civic engagement, and environmental justice projects. They like to eat good food and be in nature in their free time.

Eddie Wong – Eddie is the editor of East Wind ezine.