I don’t know about you, but I’m done –  tired and fried, sick to my stomach . Anxieties and sorrow about the pandemic combined with rage against POTUS (Pompous Asshole of the United States) have energized me in a strange way like a wounded snake coiled for one more strike. So here we are with seven days until Nov. 3 – seven days to make our last pitch for those who have not voted against Trump to make their way the polls and/or drop off their ballots. For those who have rightfully or wrongfully concluded that both parties have failed them, just take a look at naked power grab by the Repugs as they rushed to stack the Supreme Court.  Things may not get better for you in the short-term, but they certainly can get worse.

So here we are with seven days to sound the alarm much as these artists did last July when they launched ENOUGH of Trump with People for the American Way. Prominent artists like Ed Ruscha and Richard Serra sold limited edition prints  to fund voter engagement work. And many artists offered their works for free so that YOU can reprint them and plaster them up.  Powerful, bold statements like these capture attention in ways that a candidate’s ads do not; these images are memorable. You have seven days, seven days, seven days. Make the most of it.

Deborah Kass’ “Enough Already” is a candy-colored riot and it grabs your attention immediately. “I will do anything to remove this malignant moron,” said Kass. “Art for a political campaign needs to be concise, direct, and pack a wallop visually and politically,” said Kass. (quoted in ArtNews) 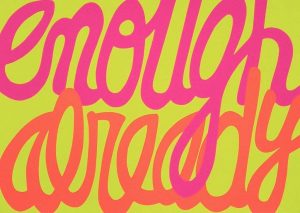 “Throughout his presidency his hateful immigration policies have harmed countless people. Whether it’s his odious childhood separation policy or the wall at the southern border — a border imposed across ancient lands that once belonged to a people with a long history on this continent,” says artist Amalia Mesa-Bains. “As Mexicans we have a heritage that goes back centuries and as laborers we have helped to make this land and we deserve respect. We have had enough. Basta!” (LA Weekly, “Enough of Trump: Using Art to Get Out The Vote” by Shana Nys Dambrot) 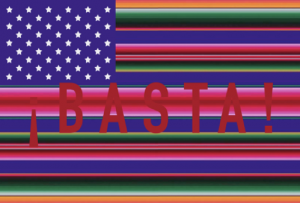 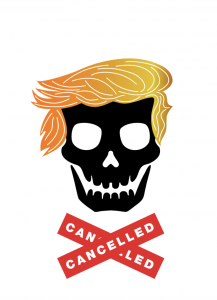 Takaaki Matsumoto is a renowned graphic designer whose 30-year career is noted in numerous publications and art institutions. (See his work at Matsumoto Incorporated.)

Seven days, my friends, seven days to share these images with family and friends and make someone stop, look and listen. 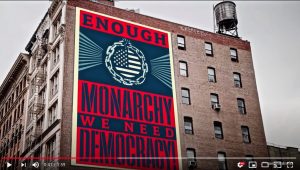 “ENOUGH of Trump” wall mural by Shepard Fairey. Billboards, wall painting, and signs appear in Michigan, Wisconsin, and Pennsylvania in this People for the American Way campaign. 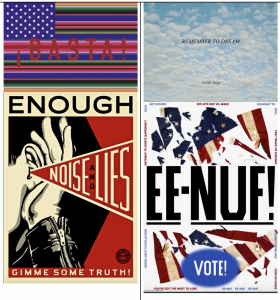