Wind. Sometimes it’s a cool, gentle ocean breeze. Sometimes it’s  a fierce blast of heat. Whether it is hot or cold, wind is simply energy moving through space and time. East Wind ezine is like the wind. We are a new energy gathering strength from our past to move us into the future.

Many of the contributors to this ezine helped develop the magazine East Wind: Politics and Culture of Asians in the U.S., which was published from 1982 to 1989 by Getting Together Publications. East Wind magazine was intentionally broad-based and contained many voices including those of socialists, liberals and progressives. Although it has been over 30 years since East Wind magazine was published, many of the issues raised then are still sadly relevant today: hate crimes, immigration restrictions, and more. But equally true is the fierce, beautiful affirmation of our Asian Pacific American identities forged in response to marginalization and exclusion. Just like our immigrant ancestors, who wrote their stories in their native languages, we refuse to be silent and we refuse to be invisible.

This new East Wind ezine is open to everyone who is interested in a new, progressive future.

Many of us came out of the revolutionary and progressive movements of the 1960s and 1970s which were inspired in part by the anti-colonial and anti-imperialist liberation struggles in Africa, Asia, and Latin America. We were also inspired by the Civil Rights Movement, the anti-Vietnam War movement, the Asian American, African American, and Chicano/Latino struggles for self-determination. We look forward to working with new generations of activists whose roots are in the struggles of today.

We drew the name East Wind from Chairman Mao’s analysis of the international situation in 1957 where he observed that the forces of socialism (the East) would prevail over the imperialist forces (the West). As we all know, things didn’t quite turn out that way.

Today, there is a new wind blowing its toxic mix of white supremacy, anti-Semitism, xenophobia, misogyny, anti-gay/lesbian/transgender and reactionary politics across the U.S. and internationally. We have seen hard-fought gains in civil rights, gay and lesbian rights, and in the environmental arena snatched back by Trump and the right wing. We cannot allow this hatred to grow and poison our world. The clock is ticking and it is time for many of us old veterans to jump back into the fray and join with younger generations of activists and soon-to-be activists to build a massive movement against the forces of hate, intolerance, and greed.

East Wind ezine attempts to make a small but important contribution to building the movement against the right. Rooted in our knowledge and ties in the Asian Pacific American communities and suffused with the spirit of solidarity with all oppressed peoples, this ezine attempts to inform and inspire through sharing news of community organizing efforts and new artistic and cultural expressions that arm us with the tools to sustain our movement building efforts. 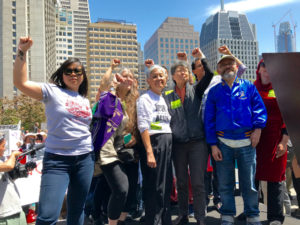 Speakers at May 6, 2017 Rally for Inclusion in SF Chinatown.Photo: Eddie Wong

We plan to publish a Fall and Spring edition each year, but we’ll also post new articles regularly. Please sign up for updates and never miss a new post. We encourage all our readers to submit content whether its a cartoon or an article or a poem.  Go to the  “Contact Us” button on the East Wind ezine website. Just drop us a line with your story suggestions and proposed articles/artwork. All of the articles will represent the opinions of the writer and artists. The editorial guidelines are simple: keep it interesting and original and free of personal attacks.

We’re interested in covering the issues of the day from organizing efforts to new artistic work. We’re interested in commentaries on popular culture vis a vis how Asian Pacific American peoples are portrayed and how we can use culture to affirm our identities. We’re interested in sparking dialogue and debate about how to strengthen the progressive forces among Asian Pacific American communities and how to link up with other similarly minded efforts. East Wind ezine is proud to be part of the Resistance to Donald Trump and his white supremacist, Christian nationalist allies.

If you freezing your butt off in a dorm room in Michigan or just feeling lonely and hungry for some Asian soul food down in Texas, at least you’ll have East Wind ezine to make you feel a little more connected to your brothers and sisters all over the nation. We try to mix it up – political commentaries, profiles of some kick ass organizers, both young and old, poems, music and film reviews, history – we need all of it to feed our hearts and minds.

I’m hoping that something you read or see here will inspire you to take up political work wherever you are. The stakes are high and we need EVERYONE to throw down for the battle of our lives. It is imperative that we do all we can to beat back Trump by ousting his Republican allies from Congress in the mid-term elections this November. Even if we do not succeed in taking back the House and Senate, we must do all we can to build awareness of the hateful policies enacted by the Trump administration and strengthen our ability to dump the chump in 2020. I feel like my head will explode if we have to suffer six more years of this FOOL

The short-term focus is on Trump and the Right, but the long term goal is more fundamental social change. And we will have plenty of dialog and debate over what that change entails, but for the moment let’s focus on removing these evil, hateful fucks from the White House.  As former Texas Commissioner of Agriculture and longtime progressive Jim Hightower once said, “the water won’t clear up until we get the hogs out of the creek.” And we better do it soon before the water is poisoned. 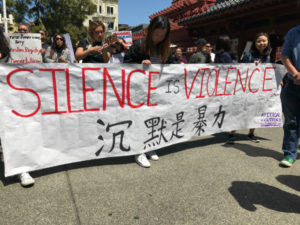 I don’t want to end on doom and gloom. Yes, there is plenty of struggle ahead and those whiffs of fascism, i.e. intimidating the press, dismissing facts like climate change as “fake news”, and unlawful detention and deportation, are some serious shit. But we can’t win with hatred in our hearts. We can’t sustain our movement by fearing the future. We can only win by projecting hope for a better world and working our butts off. So turn up the volume when Tribe Called Quest says it’s time for “rippin’ and rompin’” or when Joan Baez, going strong at 77 years old, sings “ring them bells.” Put John Coltrane’s “Wise Ones” on repeat foeva. In other words, find the joy in resistance and then do what Erykah Badu says and “lay in the groove, y’all.”

In the end, East Wind ezine is what you make it. Bob Dylan wrote about something “blowin’ in the wind.” That something is you and the energy that fuels our dreams and aspirations.

Eddie Wong is the editor and publisher of East Wind e-zine. He has been a writer, photographer/filmmaker, activist and organizer for decades. Among his proudest achievements are being a co-founder of Visual Communications, working as an aide to the Rev. Jesse Jackson and the Rainbow Coalition, and serving as Executive Director of NAATA/CAAM and the Angel Island Immigration Station Foundation. He was also the founding editor of East Wind: Politics and Culture of Asians in the U.S.

I want to acknowledge the contributions of Pam Matsuoka, graphic designer, Mark Pickus, web consultant, Leon Sun, artist, photographer and logo designer, and our friends at the Asian Pacific Islander Cultural Center in San Francisco. They helped launched this issue of East Wind ezine. Thank you.

I want to thank all the writers and artists who shared their work with us.