Just got a message from my cell phone: mandatory shut down of all businesses catering to entertainment, personal services, cafes, restaurants, and some public transportation. This is for a huge megalopolis called Saigon. It is serious and the government has done the necessary precautions in this socialist republic where I have made my home for the last four years. Here in District 7 of what we call Saigon South, the long plaza/walkway in my Skygarden residence complex is almost empty this morning after the official announcement. Workers in uniform are still pruning the hedges while convenience stores still operate to ease the worry of needing daily basic necessities. Overall, we are in a better situation comparing to other locations around the city and even around the country or the globe.

Within the radius of a mile or so, let me tell you how life is with Cô Vy which is a newly coined word applied to this Corona Virus. Perhaps, it is too long to pronounce the whole two words in English (may be half in English) so Vietnamese speakers shorten it to make it sound like the name of a lady, Ms. Vy or Cô Vy, a pretty popular name. 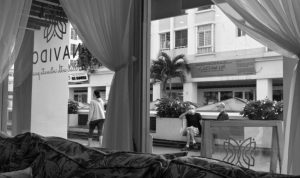 The plaza started to empty out with less foot traffic before the imposed social distancing and lockdown. Photo by Chung Hoàng Chuong.

It was just when we were all set to welcome the year of the Rat that the news came with the first fatalities in Wu Han, China where maybe a good ten years ago, I visited as a guest of Hua Zhong Da Xue (Huazhong University). My journey to Hu Bei also included a Yi Chang stop at Three Gorges Dam and a cruise on the Chang Jiang River. It was during Spring in Central China and the hospitality was exceptional.

When the first casualties of this virus onslaught were announced, the Viet Nam government proceeded with caution not to cause a panic but with a firm control of the situation. As Tết approached, flower markets and New Year floral displays were illuminating many parts of the city, and people went about enjoying a few days of rest keeping up with family tradition. Just then the number in Hu Bei shot up, a lock down occurred at some suspected locations. At that time many workers returned from places in China or Korea where they come from, taking advantage of the long holiday. When the Daegu region in South Korea got into drastic health situation, Viet Nam quickly monitored travelers coming in and out. Some were required to undergo a two-week quarantine and were kept away from the large cities. The authorities have reacted well. Here in this Quận 7, we have a large Korean community who have lived and worked in the city for many years and movement back and forth from the home country are frequent. They responded to the call and have been very cooperative. 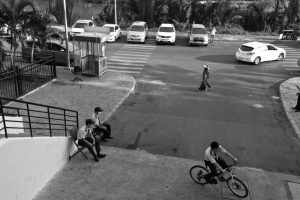 A social frame blending the rich in private car and those who protect the rich, the worker to service the rich. You see less of the rich in the streets during the Pandemic time (hiding in cars and fancy villas) but more of the poor when you go to a working-class district. They still hope to work during this difficult time. Alas, social stratification is always interesting to study. Photo by Chung Hoàng Chuong.

Koreatown Saigon as I call my neighborhood was a big area that was reclaimed from swamps before the late 90s. A daring bright-minded Taiwanese by the name of Lawrence Ting got the idea of developing  this area into a viable living section of growing Saigon. He was quite successful in getting a reputable firm from San Francisco to be the main architectural designer. Upon completion, they received an award for what is now known as Phú Mỹ Hưng. From a wetland covered with water plants of all kinds, quickly, it becomes a choice area for many well-to-do city residents. Ex-pats began to move in and then the Korean immigrants made this into a vibrant Korean business center of which Garden Grove, California might be so envious. I am part of this community and this reminds me of the multi-ethnic features of the Bay Area of San Francisco and in particular Oakland. So how it is like living with Cô VY?

So far, we have been lucky. Just in the past weeks, one case was discovered in time and the whole block was quarantined. What is in our favor are the observations I recorded: Once we learned about the Wuhan situation, the responses were swift, and the warnings were out quickly. The flows of cross-border crossings were monitored and then the information was readily available through the local media and government outlets. At 16 known cases, we were doing well, and the patients were recovering. Hospitals and health centers were not overwhelmed. In addition, Vietnamese doctors are quite familiar with tropical diseases. They have treated Dengue fever, malaria, and SARS patients only a few years back. This medical experience proved to be valuable.

Another factor is the hot weather. Hovering around 35 Celsius daily is not ideal for Cô Vy. There are days tropical heat is scorching hot keeping you from venturing outside too long. Many taxi cabs kept their windows down to let hot air flow through. Of course, the outside heat makes riders uncomfortable but the complaints are few. Changing behavior and habits are always difficult, but people keep their mask on with washing liquid easily within reach. It is nice to see a high degree of compliance. Ghen Co Vy, a popular tune, was going viral with tips to stay clean and this is shared widely on social media here and abroad.

We thought it was OK to return to work when another surge spoiled the whole effort after we had 16 cases under control. The returning travelers were careless and they messed things up pretty bad. Tết holiday was extended for another week then another week until now. The community again responded well. 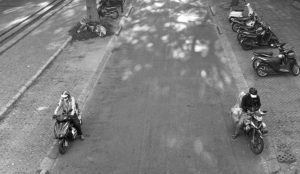 The delivery team is poised every morning for breakfast delivery or taking people to work and making food deliveries. Photo by Chung Hoàng Chuong.

The next two weeks are crucial with the implementation of social distancing. We have been pretty lucky so far. Our airports are closed to international travelers and movement across provinces is also limited. We are told to stay home and enjoy each other’s companionship. People are required to wear masks when going outside, and a fine is levied if you walk around “mask less”.

Some have suggested that autocracies are better than democracies in facing health threats. I am not really sure but in the present context it has worked well. Of course, there are elements that contribute to the effectiveness and the overall control of the situation. The mood is not one of optimism but one of guarded optimism. We have done well so far considering the low number of cases and there is no fatality at the time of this writing, keeping my finger crossed. 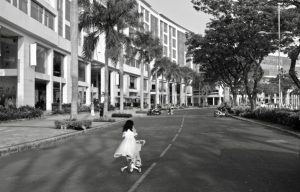 It seems that young children are in a better health situation. Photo by Chung Hoàng Chuong.

We are still in the lockdown mode but there are basic supplies going around. As I write these ending lines, we are still on our very first week of social distancing and are required stay at home. This will last until May 15. The cooperation from all segments of the population is important as we try to flatten the curve and ride this out.

Chung Hoang Chuong has been a leader in developing Southeast Asian studies starting in 1981 at U.C. Berkeley and later teaching for several decades as a Professor of Asian American Studies at the City College of San Francisco. He is also an accomplished photographer who completed his Masters of Fine Arts at Lone Mountain College. He currently lives in Vietnam. 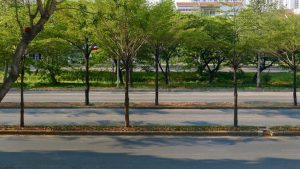 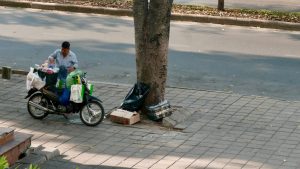 On the sidewalk a cafe on two wheels serves many workers who need to work just like the café owner needs to make ends meet during this time. I thank them and love them as much as the frontline doctors and nurses who are the real heroes. Photo by Chung Hoàng Chuong.