On August 13, 2020 the U.S. Postal Service will honor pioneering Japanese American artist Ruth Asawa with the release of stamps showcasing her iconic wire sculptures in a pane of 20 stamps, two each of 10 designs, gorgeously photographed by Dan Bradica and Laurence Cuneo.

This event is significant as it begins to fill a gap in the celebration of Asian American and Pacific Islander cultures. Beyond a handful of Hawaiian royalty and the sculptor Isamu Noguchi, the list of notables from these communities is well below that of other American heritage stamps issued. 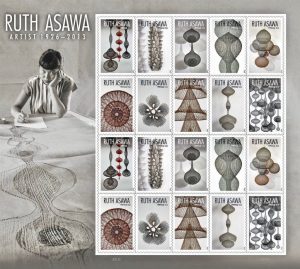 In fact, in June 2010 Michael Honda, then representing California’s 15th Congressional District, called on the Postmaster General to have the U.S. Postal Service issue more Asian American-themed stamps, beyond the 33 that had been offered at the time, half of which were devoted to the annual Lunar New Year celebrations. In his letter he noted the significant contributions to the socio-political and cultural landscape of this country by API communities and the importance of U.S. postage stamps in educating the public about these occurrences.

The addition of this new set will complement a roster occupied by Asawa’s influential mentors from Black Mountain College, Josef Albers (1980) and Buckminster Fuller (2004), as well as her good friend, photographer Imogen Cunningham (2002).

Displaying a variety of her intricately woven metal creations, some billowing in undulating contours, others casting abstract, naturally inspired forms outward in concentric patterns, the set showcases the unique durability and character of her innovative pieces. As miniature works on paper they are accessible as philatelic treasures. 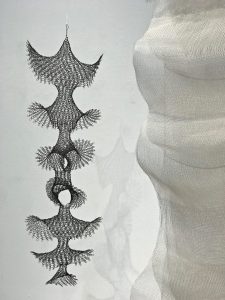 As a native San Franciscan who grew up in the outer Richmond, a very different neighborhood in the early 1950s, it was rare to see residents of Asian descent outside of Chinatown and Japantown. But my family, a little ahead of the times, made of a point of visiting the M. H. de Young Memorial Museum and the California Palace of the Legion of Honor as they were known then and I had a particular fondness for the de Young. It was there, years later that I would have a chance sighting of the now legendary artist.

Ruth Asawa had yet to be recognized in the larger art world beyond the Bay Area but her work in the public schools was known to native residents like our family and she was a fixture at the de Young.

When I look back on those times and how I came to be an artist I realize the depth of impact Ruth Asawa had even though I did not have the good fortune to be in her classes or workshops. The fact of her existence and who she was became far reaching.

Over the years I would have more chance encounters with the artist, meeting her at her art openings, and whenever I came across her works I would capture them with my camera. Once I ended up sitting at the same table with Ruth and her husband, Albert Lanier, for a fundraiser at City View Restaurant in Chinatown.

So while I would not have claimed to know her, she became ubiquitous in my life and I would become an accidental advocate for her, first called upon by Daniell Cornell, who curated her de Young Museum exhibition, “The Sculpture of Ruth Asawa: Contours in the Air,” for a 2007 symposium to reflect on what she has meant to Asian American artists and particularly, women artists.

Some years later, a relative involved with School of the Arts, the institution she founded on the site of the former McAteer High School near the intersection of Portola Drive and O’Shaughnessy Blvd, would ask me to say a few words at the San Francisco Board of Education in support of renaming the high school in her honor. So, on February 23, 2010, a very stormy night, I joined friends in the arts and the Asawa family to present our case and together we persuaded the board members to adopt the motion. A celebration for the renaming from SOTA to Ruth Asawa School of the Arts was held on September 14, 2011 with actor Peter Coyote among the many distinguished speakers. 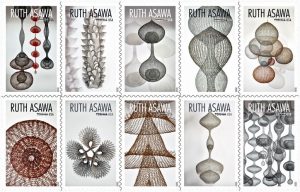 In 2005 Ruth Asawa donated fifteen of her brilliant pieces to the de Young Museum on the occasion of the opening of their new museum in Golden Gate Park. They now hold court in the lobby of the museum’s tower and are a standout attraction worth a visit if you see nothing else there.

All in all this is a stellar year posthumously for Ruth Asawa. The world has come around to embracing our beloved artist in the way we have. Her unwavering commitment and vision to making art accessible in the public schools, recognizing the profound value of incubating creativity in young minds, has become a model for excellence in educational programming whether or not students go on to become artists. Critical thinking instilled through arts exposure is now well known.

And a little icing on the cake, one may now learn more about this extraordinary artist, teacher and arts advocate in the newly published biography, “Everything She Touched: The Life of Ruth Asawa,” by Marilyn Chase from Chronicle Books.

Author’s Bio: Lenore Chinn is a painter, photographer and cultural activist who works to create structures of personal and institutional support that both sustain critical artistic production and advance movements for social justice. Portraiture, both in painting and photography, is at the core of her visual art practice. Her current street photography chronicles a rapidly changing sociopolitical landscape.

In 2006, Daniell Cornell curated an exhibition he titled The Sculpture of Ruth Asawa: Contours in the Air at the de Young Museum in San Francisco. It was the first complete retrospective of Asawa’s career. These photos are from that exhibition.

Here’s a taste of what it was like to wander through the different rooms, experiencing the play of light and shadow, surrounded by her work.

For a long time, I had wanted to produce a documentary about Ruth Asawa. There were so many facets to her that were fascinating aside from her talent as an artist: her devotion to her family, her belief in making art accessible to everyone, how being Japanese American helped shape who she became, a desire to promote community, and her incredibly generous spirit. Unfortunately I was not able to acquire the funding needed to complete the film. When Ruth passed in 2013, I posted this video as a tribute so people could appreciate the remarkable woman who was also a gifted artist. – Dianne Fukami

Dianne’s most recent film is “Norman Mineta and His Legacy: An American Story,” which premiered on PBS in 2019. She has also produced a number of films about the Japanese American experience, available at www.bridgemediainc.com.