Manhattan’s Chinatown has been home to generations of socially engaged art collectives and continues to be a locus for Asian American political resistance, dissent, and movement. From the Basement Workshop and the Asian American Art Centre in the 1970s to Godzilla and Epoxy Art Group in the following years, the tradition of grassroots cultural production work continues to be carried out by new formations like the Chinatown Art Brigade (CAB). CAB is a women-led artist collective driven by the fundamental vision that cultural, material, and aesthetic modes of production have the power to advance social change around issues of gentrification and displacement. CAB’s work is largely based in Manhattan’s Chinatown, where the percentage of Asian immigrants in the last decade has dropped nearly twenty percent due to real estate speculation, forced evictions, systematic landlord harassment, and new luxury developments. 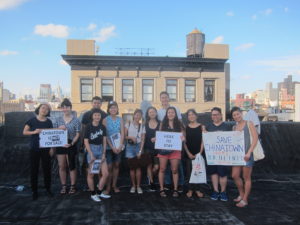 Founded in December 2015 by artists Tomie Arai, ManSee Kong, and Betty Yu, the collective has grown to include a large volunteer community of Asian American artists, students, cultural organizers, media makers, and residents. CAB’s projects have been rooted in the principle that collaboration with and accountability to those most directly impacted by oppressive structures must be central to the art making process. CAB collaborates with the Chinatown Tenants Union of CAAAV Organizing Asian Communities, a non-profit organization in Manhattan’s Chinatown that fights against tenant abuse, evictions, and displacement of low-income Asian immigrants and refugees. Over the last two years, CAB has supported the organizational efforts of CAAAV’s CTU membership base through a Here To Stay Placekeeping Project, which involves a series of intergenerational storytelling workshops, community mapping exercises, tenant curated walking tour, and outdoor mobile projections that uplifts narratives of community resistance and resilience to gentrification. The collective also frequently collaborates with The Illuminator and The W.O.W. Project at Wing On Wo & Co.

Through artist-in-residences with organizations like Culture Push, Laundromat Project, and Fourth Arts Block, CAB has organized various exhibitions, townhall forums, workshops, panel discussions, and art builds to address the role of new galleries as agents of mass displacement. As of 2015, over forty percent of all the new galleries in the city have opened in Chinatown and the Lower East Side, outpacing Chelsea, Dumbo, Bushwick, Upper East Side, and other neighborhoods known to have an art scene. These art galleries have contributed to increasing rents and evictions while at the same time have failed to address the immediate concerns of longtime residents in the neighborhood who are predominately low-income Chinese families and elders who live below the poverty threshold. In September 2017, CAB protested James Cohan Gallery and artist Omer Fast for a racist yellowface installation and mobilized allies from across the city and country to stand in solidarity against displacement including Mothers on the Move, Equality for Flatbush, Brooklyn Anti-Gentrification Network, Decolonize This Place, Queens Neighborhood United, Mi Casa No Es Su Casa, Defend Corona, Defend Boyle Heights, Chinatown Action Group 華埠行動小組, and Chinatown Community for Equitable Development 華埠公平發展會. CAB has also issued a ten-point pledge with concrete steps for artists to take to mitigate their role in gentrification. 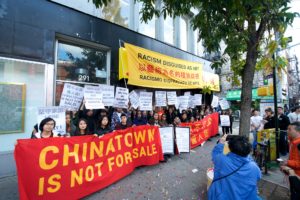 CAB mounting protests in front of the James Cohan Gallery in September and October of 2017.

Recognizing that displacement through immigrant detention and deportation is one of the most critical issues facing American cities, CAB recently traveled to Philadelphia’s Chinatown to work on a placekeeping project with Grassroots Asians Rising’s National Youth Exchange, made up of fifteen groups from around the nation mobilizing to end family separation, xenophobia, detention, and deportation of immigrants. Hosted by Asian Americans United and VietLead, the collaborative youth-driven project involved a series of interactive workshops and large-scale outdoor projections celebrating stories of resistance and resilience of undocumented immigrant communities, DACA recipients, DREAMers, and their families. Those who were walking by were invited to write their own personal messages on the People’s Pad which was live projected from the parking lot of a local community church across from the Vine Street Expressway that cuts through the heart of Philadelphia’s Chinatown. 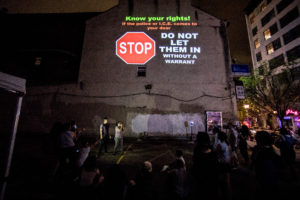 Resident curated messages lit up the night with messages of solidarity and struggle.

CAB’s most recent collaboration in Manhattan’s Chinatown with CAAAV’s CTU membership base is called Here To Stay: Housing for the People Mapping Project, which is a bilingual, multimedia project that features video and audio oral history testimonials from Chinatown tenants who are directly impacted by displacement. While the long-term goal of the project is to protect and preserve neighborhood stories, memories, and places, the process involves expanding political possibilities by training tenants in the new media technologies of augmented reality and 360-degree video production. CAB’s cultural production work pushes the boundaries of what community driven art can look like in practice and shines light on how culture can be used effectively as a tool to improve the social and material conditions of frontline communities. 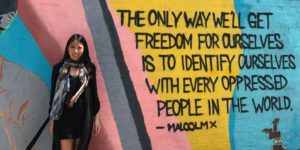 The photos were provided by Diane Wong and the Chinatown Art Brigade.