We’ve devoted several articles/posts recently to the horrific rise of anti-Chinese and anti-Asian violence induced by racist hysteria over Covid-19.  As Bill Wong and Helen Zia pointed out in their articles, President Trump gave license to haters throughout the land by labeling it the “Chinese virus.”  In addition to condemning racist hate speech and the bullying and attempted murder of Asian people, we must rally whomever we can to speak out, stand by the victims, and intervene as much as possible.  Fighting back against the haters by building solidarity is an ongoing process and many community groups and churches have been doing this work for many years. But this moment calls for immediate action before people are killed. 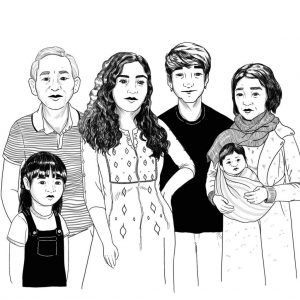 WE ARE ASIAN-AMERICAN “This illustration depicts six Asian-Americans looking straight at the viewer. An older Taiwanese American, a young Filipino American girl, a young Indian American woman, a young Korean American man, and a Japanese woman with her young child. I wanted the viewer to be stopped by the gaze of each of these people as individuals and as a collective group. Each of them have a story. Each of them have value and lessons we can learn from. They are not to be feared but loved just as the viewer is not to be feared but loved.” Artist: Tristan Cabral instagram.com/OhTristan

In the past two weeks, Asian American Christian leaders formed the Asian American Christian Collaborative and issued  the Statement on Anti-Asian Racism in the Time of COVID-19. The statement is a call to action.  Raymond Chang, the campus minister at Wheaton College, told a reporter from Christianity Today: “Our hope would be that people would address this from the pulpit,” said Ray Chang, who collaborated on the statement with church planter and writer Michelle Reyes. “There is no Good News without the bad news.”

Michelle Ami Reyes, who is South Asian and minister at the Hope Community Church in Austin, TX reported that several members of her congregation have been spat on and others have been chased by people shouting “coronavirus” at them.  “A lot of what ministry on the ground lately has looked like is caring for people who are experiencing racism and the grief and pain and the trauma that comes from that,” said Reyes to the Religious News Service.  Jeff M. Liou, National Director of Intervarsity Christian Fellowship added, “Many of us have been speaking out against this kind of stuff for a long time and have felt the need to call our leaders to account and invite them to join us. The way things are going right now just reached a breaking point for some of us.”

The statement by the Asian American Christian Collaborative takes a very nuanced approach in calling for solidarity:

Throughout our history, many of us have attempted to raise awareness of anti-Asian bias and racism in the church and the broader culture. There have been many encouraging advances and movements, yet the hate and discrimination persists. While anti-Asian racism is inflamed around the globe, we also hope that our Asian American community remembers that other communities of color have experienced and continue to experience racism daily; even at times as a result of our own colorism and anti-Blackness. We ask that Asian Americans seek opportunities for solidarity with other ethnic and racial minorities and advocate for them as many have done for us, for such a time as this. Finally, for those of you who have not personally experienced anti-Asian racism, we ask that you listen, empathize, and provide support.

To Americans of other backgrounds: we thank those of you who have been standing with us during this time. We are deeply grateful to other people of color, especially those from black and brown communities, who have paved the way forward for us to pursue justice and peace. Others of you may just be learning that anti-Asian American racism is very much alive.  Seeing us raise our voices may challenge the long-held assumption that Asian Americans are so-called “model minorities.” We invite you to educate yourself, join the cause against anti-Asian racism, and be a part of the solution. It’s important for you to recognize the reality of this racism, to intervene (i.e., if you see something, say something), and to fight against xenophobic rhetoric and violence at every level.

The statement calls for the following action steps: 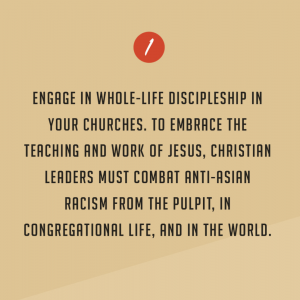 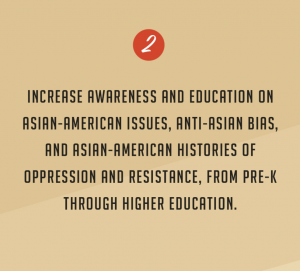 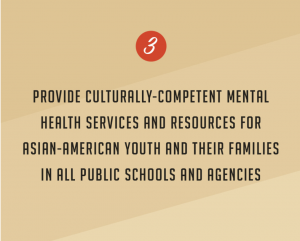 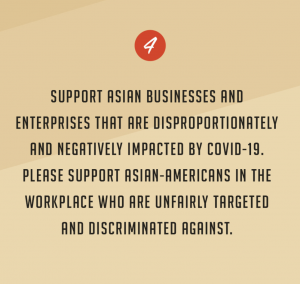 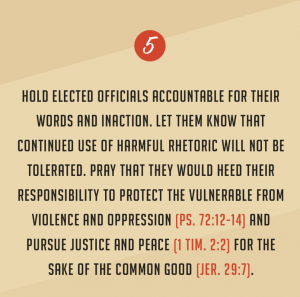 As Christians observe Palm Sunday today and recount the days leading to the crucifixion and resurrection of Jesus, it is fitting that pastors prepare to address anti-Asian violence from the pulpit.  Christianity Today noted one response:

“Pastor, don’t leave God’s people in the bondage of fear, lead them into the freedom of love. Condemn racism against our Asian neighbors,” tweeted Mika Edmondson, pastor of New City Fellowship in Grand Rapids, Michigan.

The dynamics in being an ally to Asian Americans is explored  in-depth in the following video as Raymond Chang converses with Mark Labberton, President of Fuller Seminary.

The Collaborative also produced an hour-long video the origins of the Statement on Anti-Asian Racism in the Time of COVID-19 with the following speakers:

HELEN LEE: http://helenleeauthor.com/ Helen Lee has been a Christian publishing professional since 1993, when she began her career working at Christianity Today (CT) magazine. She is currently the director of marketing at InterVarsity Press, the author of The Missional Mom, and contributor to numerous other books and Bibles, such as the NIV Devotional Bible for Women and Always There.

RUSSELL JEUNG: https://faculty.sfsu.edu/~rjeung/ Russell Jeung is a Professor of Asian American Studies at San Francisco State University. He is an immigrant rights activist, evangelical leader, and author of At Home in Exile: Finding Jesus among My Ancestors and Refugee Neighbors.

KATHY KHANG: https://kathykhang.com/ Kathy Khang is a Christian blogger, speaker, and author of Raise Your Voice: Why We Stay Silent and How to Speak Up to Challenge. She has spent more than 20 years in para-church ministry, working with college students and training organizational and church leaders.

The moderator was RAYMOND CHANG: https://twitter.com/tweetraychang

Eddie Wong is the editor and publisher of East Wind Ezine. 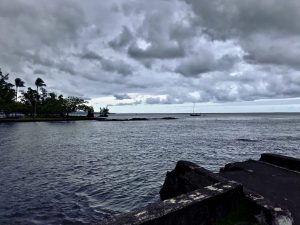 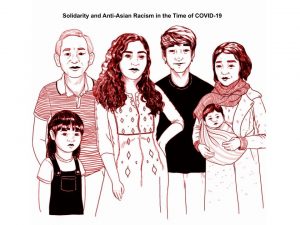