A Time to Rise:

Collective Memoirs of the Union of Democratic Filipinos (KDP)

This is a collective book project that began some 20 years ago and with many twists and turns finally made it to print. The Union of Democratic Filipinos, (or in Tagalog) Katipunan ng mga Demokratikong Pilipino (KDP) had a two-pronged approach its work: 1) to support the National Democratic struggle in the Philippines and 2) work towards building socialism in the U.S. To those ends we conducted internal theoretical study on Marxist-Leninist and Mao Tse-tung Thought to help politically guide our organizing efforts. 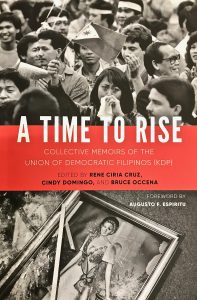 It all began in 1973 in Northern California in a meeting that called together Filipino American community activists from all parts of the country and recently immigrated Pilipino activists involved in the Philippines (mostly from the student movement) as well as a few non-Filipinos. Many of us were in college or in our 20s-30s. Martial law had been declared on Sept. 22, 1972 and almost immediately an initial counter formation of the National Committee for the Restoration of Civil Liberties in the Philippines (NCRCLP) sprang up to oppose it in the U.S.

The KDP occupied the left end of the Filipino American community political spectrum and formed in July 1973. Members was recruited from among the hundreds of thousands of Americans of the New Left, young, and old, who rejected the “Establishment” and now increasing embraced Third world Marxism and a militant style of politics that it found lacking the Communist Party USA.

The KDP had a very strict organizational leadership structure. Moreover activists paid substantial dues, organized a childcare system which enabled women to fully participate at all levels of the organization, and adhered to transfers to other parts of the country. The business of “revolution” was something taken seriously, even religiously, often at the cost of great personal sacrifice. Chapters were established in cities with large Filipino American populations, such as Los Angeles, the San Francisco Bay area, Chicago, New York, San Diego, Seattle and Honolulu. There were annual national meetings for fellowship as well as study and summation. These were always a very good bonding aspect of the organization nationally and we always looked forward to our reunions with comrades/kasamas. Membership in the KDP was probably around 250 at any given time (1973-1986). 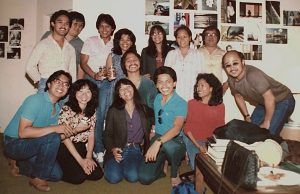 KDP activists get together socially from San Francisco, Hawaii, and Los Angeles after a long meeting. Photo courtesy of Florante Ibaznez. 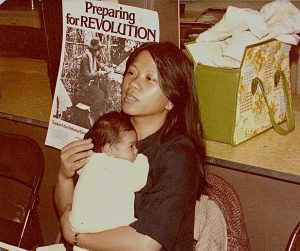 More than two-thirds of the stories in A Time To Rise are by women, reflecting the powerful role that they played in the organization and its leadership. At that time in the general movement when LGBTs were not very welcomed in leftist groups, the KDP held them in leadership and the common determining factor was always “as long as everybody could do the work.” Criticism and self-criticism seemingly was always a part of every

meeting. Ideological backsliding was struggled with. This is perhaps what also made it difficult to be infiltrated although a few may have still slipped under the door. Despite it all, love also found its way in the KDP. Couples and partners came together, children were born and folks had families and relationships to deal with. We also dealt with our own mortality as kasamas have passed over the years.

This book is a collection of personal stories of activist life during the struggle against the Marcos Dictatorship in the Philippines as well as the struggle to defend the rights of the Filipino American community in the U.S. It is not so much a book of the politics of the KDP (we defined ourselves as a revolutionary mass based organization) and the line struggle it conducted with the political forces in the Philippines or other left organizations in the U.S. movement as it is the real life journey of individuals that dedicated a large part of their lives to the human struggle for peace and justice in the world. 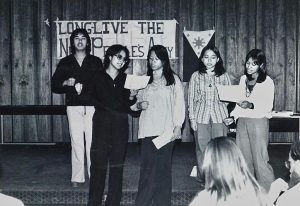 Utilizing and honing our organizing skills, we helped build broad based coalitions within communities to defend foreign trained nurses, reform labor unions, expose mistreatment of 4H Club exchange students from the Philippines, oppose the Bakke decision and lobby for the withdrawal of US aid to the Marcos dictatorship and withdrawal of US Military Bases. We also fundraised for support of Philippine political prisoners thru X-MAS caroling educationals, and we produced through our cultural arm – Sining Bayan – a record album of Philippine Revolutionary Songs as well as performed dramatic and musical plays exposing the realities of the conditions in the Philippines as well as historical struggles of Filipino Americans here in the states. There were many sacrifices of time and energy. 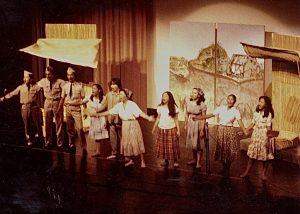 Some KDP activists actually gave up their lives for the cause, being murdered as union leader reformers of the ILWU Local 37, the Alaska Cannery workers union, in Seattle. Their murders were eventually traced back to orders and payment from the Marcos Dictatorship. The stories of courage in the aftermath of that tragedy are perhaps the most revealing in the book. But there are also accounts of the day-to-day struggles of keeping family together, being politically transferred to other cities, keeping a job to pay the bills and seemingly endless meetings almost every night of the week. 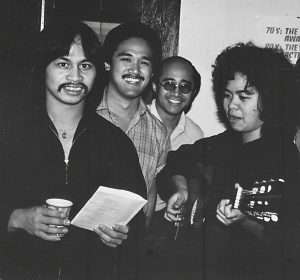 KDP leading a group sing along during the Filipino People’s Far West Convention planning meeting in Los Angeles. The song was “Profits Enslave the World” from a poem by Philip Vera Cruz and set to music by Chris Bautista. Photo by Florante Ibanez.

There are also stories of humor in the face of those adverse times as activists organized in the community and within the broader American context. In addition are a few stories from the children of activists and their own youthful experiences. These stories hopefully will encourage as well as enlighten the next generation of activists which was the goal of this project, documenting the story of the KDP through the eyes of our various kasamas in different parts of the country, of different ages, and even of differing sexual orientations.

Florante Peter Ibanez has been involved in community and social activism since his early college days. He worked at the UCLA Asian American Studies Center in the early 1970’s, helped co-found UCLA Samahang Pilipino and later graduated from UC Irvine where he also co-founded UCI Kababayan and pushed for the creation of the UCI Cross Cultural Center. While a student he also became an activist of the Union of Democratic Filipinos (KDP) who opposed the Marcos Dictatorship in the Philippines and called for social change in the U.S. He has been a labor organizer, Lions Club president, father, hula dancer, computer technician and graduated (2006) from the UCLA Joint MLIS / MA Program in Information Studies and Asian American Studies to emerge as a Librarian with a specialization in archival studies. His passion is to help develop a Filipino American Museum and Research Library.

He is currently a librarian at Loyala Law School. He has taught Filipino American studies at Loyola Marymount College and Pasadena City College.

He is also a co-author of Filipinos in Carson and the South Bay (Aracadia Press).

His life partner is Roselyn Estepa Ibanez, whom he met at the 1973 Filipino People’s Far West Convention in San Jose, CA. 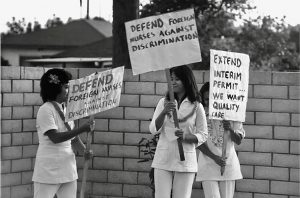 KDP skit defending Philippine and other foreign-trained nurses from discrimination in licensing and deportation. Performed during a Far West convention fundraiser in Carson, CA. 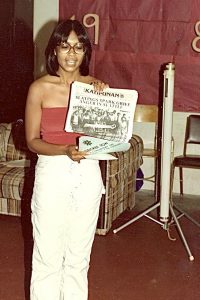 The Ang Katipunan newspaper of the KDP cost $.25/copy and was sold at churches, festivals, markets, campuses, and bookstores. 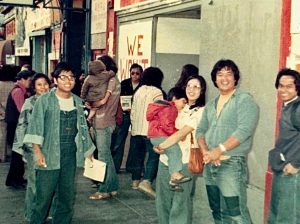 KDP activists from Los Angeles Chapter taking a break during a national KDP conference in Oakland stand in front of the I-Hotel in San Francisco.