Before launching into Raymond Chang’s article, you can get a sense of the dynamic, joyous atmosphere of the event via this news clip from ABC 7 reporter Cate Cauguiran.

“After this I looked, and there before me was a great multitude that no one could count, from every nation, tribe, people and language, standing before the throne and before the Lamb.” – Rev. 7:9a (NIV)

On Sunday, June 28, 2020, from 3:30-6:30 p.m., between one to two thousand Asian American Christians and friends of our community, representing over 100 churches throughout Chicagoland, joined together in Chinatown to march for Black lives and dignity. The march was designed to be a spiritually formative exercise that took us from lament to hope and celebration in order to help us stand in God honoring solidarity with African Americans now, and into the future.

The prayer march started in Ping Tom Park where David Wu, executive director of the Pui Tak Center, opened with a prayer. I then shared a word on the problem of insufficient progress around racial justice. Afterwards, we kneeled in silence for 8 minutes and 46 seconds, the amount of time that Derek Chauvin had his knee on George Floyd’s neck. It was a way to remember and to viscerally understand how much weight was put on the neck of someone who bore God’s image and how long 8:46 really is.

Then, we marched silently until we arrived at the Wells/Cullerton Parking lot where a Black man allegedly murdered two Chinese men during a robbery. Grace Chan (executive director of Coalition for a Better Chinese American Community) and Ally Henny of The Witness BCC offered prayers for healing around the tensions and divisions between the Asian American and African American communities – giving special attention to the local tensions between Chinese residents in Chinatown. 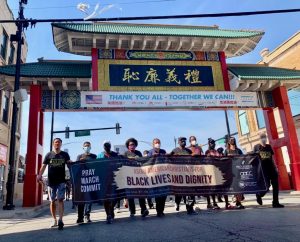 Afterwards, we marched to Chinese Christian Union Church, a historic 105-year-old Asian American church in old Chinatown. As we marched to CCUC down Wentworth Avenue, we passed through the historic Chinatown Gate. As we did, a deep joy emerged in my heart. We were marching through the most distinctly Asian American neighborhood in Chicago, and we were doing it to stand with and for African Americans. I felt like we were standing against the powers and principalities that keep us insular and separated in a racialized society. 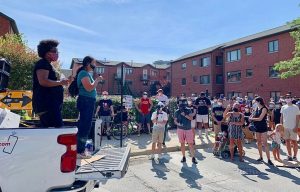 CCUC senior pastor Andrew Lee offered a prayer of confession and repentance over our silence and complicity around racial injustice. Francis Li, priest of St. Therese Chinese Catholic Church, read scripture passages from Galatians and Revelation, and Jamal Johnson, Progressive Baptist Church’s executive pastor, prayed for restoration over our community. A worship band from CCUC led us in a beautiful rendition of “I Give Myself Away,” by William McDowell.

I had a unique vantage point of the #AACMarch, as I stood atop a truck bed at every stop along the way and saw the crowds prayerfully marching behind us. It was quite the picture. Even though about 70-80 percent (estimating) of those participating were ethnically Asian (approximately 60% of the world’s population is Asian), we walked with friends from the Latin@, Black, and white communities. Jane Hong, professor of Asian American history at Occidental, shared that this was a historical event as at no time in history, has a march of this scale and diversity of attendance (along with the historic stature of churches) been led by Asian Americans – let alone Asian American Christians. She texted me saying that as far as she could tell, she didn’t think that Asian Americans had helmed many events like this before – especially in support of Black lives. I couldn’t help but think that the march for Black lives and dignity reflected the great multitude the apostle John writes about in Revelation. 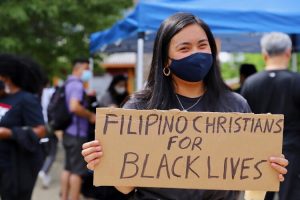 From CCUC, we headed down Wentworth toward Progressive Baptist Church, a 101-year-old African American church. Along the way, we stopped three times. Jay and Lynn Catanus, and their four-year-old son, Noah, prayed that Asian Americans would take up the mantle of justice and righteousness. Other children from the Asian American and African American communities prayed for the emerging generations. Afterwards, professor Greg Lee of Wheaton College and Diana Collymore of InterVarsity USA prayed that bridges would be built between the Asian American and African American communities. It is worth mentioning that as we marched, chants erupted from the center of the crowd where younger participants (possibly high school or college students) were leading chants like, “No Justice, No Peace,” “Say his/her name!” and “Whose life matters?”

After we entered the parking lot of Progressive Baptist Church, professor Soong Chan Rah of North Park Theological Seminary shared how Asian Americans can move forward, standing in solidarity with African Americans and recognizing the ways that white supremacy pits our communities against one another. Jay Catanus, AACC director of ecclesial advocacy and pastor of Garden City Church, read the AACC Commitments for Asian American Christians to actively stand in solidarity with the African American community.

Then, Watson Jones III, pastor of the 140-year-old Compassion Baptist Church called us to reflect on Dr. Martin Luther King’s famous question: “Where do we go from here?” Watson Jones III urged us not to put our signs back in our closets, or take off our Black Lives Matter shirts and act like we weren’t at the march. Instead, we should commit by pulling virtues from a kingdom that isn’t fully here and standing with Jesus in the gutter.

The final word, from pastor Charlie Dates of Progressive Baptist Church, confronted an anemic American Christianity that cares about white Americans first. He took us through 400 years of African Americans asking, “How long?” The response, because of the promises of God, was the reverberating chant of “Not long!”

We closed with a prayer of blessing over the African American community by the Lausanne Movement’s Sam George and a prayer of blessing over the Asian American community by Watson Jones III. Grammy-nominated gospel artist Tiff Joy concluded the march by singing “We’ve Come This Far by Faith,” by Donnie McClurkin. Charlie Dates then spoke a benediction over us all. 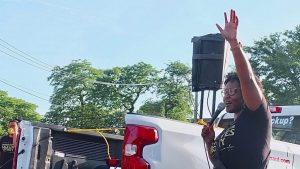 When the event was over, many of the Asian Americans did what we often do: we remained in the church parking lot for nearly an hour, chatting and connecting with others.

Reflecting on this extraordinary experience, I can’t help but feel deep gratitude for the many Asian Americans who showed up to pray, march, and commit for the sake of Black lives and dignity. I have never been to an event where this many Asian Americans came to stand for a racial issue outside of our own communities.

Many Asian American pastors told me that this explicitly Asian American Christian march pushed them to have conversations with their elder boards and church members that might previously have been avoided. Some pastors found immediate support. Others had questions about what marching meant. Some experienced a fair amount of pushback, and still others felt a prayer march was too much for their congregations.

Seeing so many Asian American congregations struggle with the decision to march or to endorse the march was illuminating. Though it wasn’t surprising, seeing Asian American Christians wrestle with the decision, confirmed much of the concern I had (and still have) around Asian American Christian understanding of the ways race operates and how tenuously we tread around a God-honoring pursuit of racial justice. In many ways, this event served as a gauge for the work we still need to do in discipling Asian Americans with the whole counsel of God. I had many deflating conversations with pastors who felt like even a march like this was too much for them or their peers, while others were extremely encouraging in the ways they mobilized their people to pray, march, and commit. Overall I was very encouraged to see so many willing to come out.

The Asian American Christians for Black Lives and Dignity March was just one small step on the pathway towards racial justice and discipling followers of Jesus to embrace the whole counsel of God in their lives. 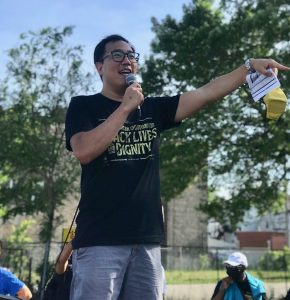 I want to give special acknowledgement and thanks to David Wu, Andrew Lee, Chris Javier, Watson Jones III, Charlie Dates, Jamal Johnson, Soong Chan Rah, and the many pastors who invited and encouraged their congregants to stand in solidarity with the Black community. I also want to give a special thanks to our AACC team members in Chicago: Jay Catanus, Maila Kue, Given Tanri, and Sarah Lam for all their work in making this event possible. My hope is that the event will spark much needed conversations and dialogue, which will hopefully lead to firm action towards the shalom we are called into.

To God be the glory.