The Missing Piece Project wishes to share the following video, which was to be part of the annual dedication at the Vietnam Veterans Memorial Wall in Washington, D.C. Each year for the past several years, the Missing Piece Project has marked April 30, the day the American War ended and a flow of refugees began to leave Vietnam. However, the installation of objects, performances, and video dedication are all being done virtually today because of Covid-19.  The video shows the melting of 3,000 bullet casings which were recast into a gong by Stephanie Mercedes. The bullet casings represent 1/1000 of the estimated 3 million lives lost during the war. 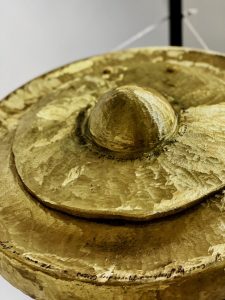 The piece was commissioned by Antonius Bui, who also contributed to the movements in the video. The video also contains a story told by Tràn Vān Tam (father of Kim Nguyen Tran, the translator of the story) and poetry by Keva Bui and Joseph Nguyen.

The Missing Piece Project also invites you to view several art pieces, performances and stories that were contributed to the 2020 dedication. Click on this Missing PIeces Gallery 2020. 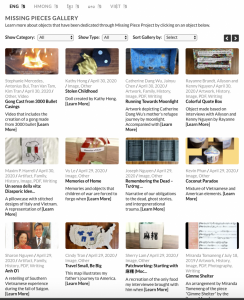 Here are bios of the key video production team:

Stephanie Mercedes is a Washington D.C. based artist who melts down weapons to make musical installations and excavates missing histories. Mercedes combines metal working, installation-art and performance. She hopes to take the materiality of violence and turn it into its opposite: music and art. www.stephaniemercedes.com 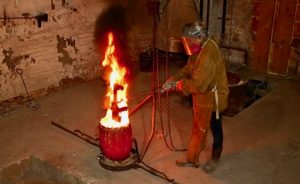 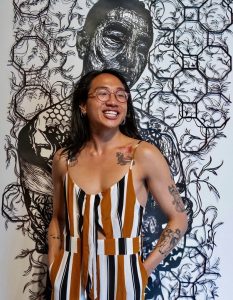 Dr. Kim Nguyen Tran is an arts educator, ethnomusicologist, and community organizer based in Los Angeles. She is resident ethnomusicologist for the arts organization Bridge to Everywhere (www.bridgetoeverywhere.org) and leader/participant of the Missing Piece Project (www.missingpieceproject.org). 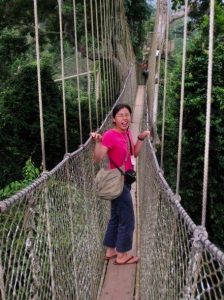 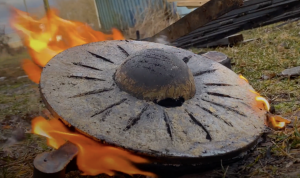 Gong made from 3,000 bullet casings. Photo from video.

Learn about the Missing Piece Project’s Vision and History.

The Missing Piece Project envisions a nationwide, coordinated, mass dedication of objects at the Vietnam Veterans Memorial of Washington DC (the Wall) by Vietnamese, Lao, Hmong, Cambodian, and other communities still affected today by the legacy of the conflict in Southeast Asia, allowing these communities to reclaim their past experiences, history, and memories, on their own terms. The collective dedication will take place on the 50th anniversary of the “end” of the Vietnam War on April 30, 2025. Pilot versions of the project occured on April 30, 2018 and 2019, with dedications of objects from the VietUnity-Los Angeles community and others. In coming years we aim to expand the project to be more inclusive of the diverse communities affected by the war.

The Wall has been hailed as a profound site of healing for those who visit. Visitors often leave items at the Wall dedicated to fallen loved ones, or in an attempt to let go of traumatic experiences. Since its opening in 1982, national park rangers have collected all items left at the Wall, which are catalogued and stored in a national archive. However, during a visit to the archive in 2015, with the help of archive staff, we found only 6 items that had been left at the Wall by members of the Vietnamese refugee community, out of hundreds of thousands. Why has the Vietnamese refugee community not been included in this public memorial? What other communities who have been affected by the conflict in Southeast Asia are missing from this history? Has there been an explicit (the names of your dead are not here) and/or implicit (this space is not for you, don’t leave your items here) exclusion of these voices from this national memorial? This project carves out space for the collective engagement of diverse voices affected by the war in Southeast Asia in this public, nationally recognized memorial.