Veteran journalist, editor and author William Gee Wong examines the recent explosion of racist and xenophobic violence and its impact on the many waves Chinese in America.

The racism now being felt by people of Chinese descent and some other Asian Americans because of the coronavirus pandemic is unsurprising, shocking, and infuriating.

My initial reaction when I started reading and hearing about this latest outbreak of anti-Chinese, anti-Asian racism was, well, a yawn. We’ve been there before, many times. Nothing new, same old, same old.

The worst official anti-Chinese racism was, of course, the Chinese Exclusion Act of 1882, the first national immigration law and one that targeted a specific racial-ethnic group. Other federal and state laws, while not specifying an Asian group, negatively impacted Japanese, Filipino and other Asian immigrants who came after the Gold Rush/railroad building/excluded Chinese.

Yet, at the same time that I yawned, I was shocked by the many accounts of Americans harassing, shouting down and even beating up Chinese Americans and Asian Americans because we yellow folk, according to bigots and ignoramuses, were to blame for the coronavirus pandemic. 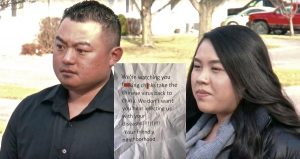 Hmong couple in Woodbury,MN reports on a racist note posted on their door. Photo from Nextshark.com

This blame game isn’t new either. Some Congressmen – yes, all white men – argued before passing the exclusion law that they didn’t want Chinese coming to America because the Chinese carried foreign, incurable diseases! Imagine that.

Nonetheless, here’s why I was shocked, while at the same time unsurprised:

A bit of personal background is necessary to understand my seemingly contradictory mindset.

I’m old-school Chinese American, a first-generation son of an immigrant who came to America during the exclusion era. I was born in Oakland, California’s Chinatown, where I spent all or most of my first 20 years, from 1941 to 1961.

My parents, natives of Hoisan (Toisan, Taishan) County in Guangdong Province, China, used false papers to get into America. My father first got here in 1912 when he was a mid-teenager. In 1933, he brought in Mom and three young daughters, my oldest sisters.

Even though they spent the majority of their lives in America, my parents identified themselves as Chinese, not American. They weren’t allowed to be “American.” They were victims, and survivors, of the dreaded exclusion law.

I, on the other hand, went through – and, in some ways, still going through, despite my own elderly status now – a roller-coaster first-generation Chinese American experience.

In my earliest years, the 1940s, I thought the world was Chinatown, a village of elders and their children who looked and sounded like one another. Kids like me and my older sisters ran around the streets of Chinatown, went to American and Chinese school, spoke Chinglish, and thought of ourselves as Chinese.

None of us gave much thought to being “American” because we didn’t know what that meant. We knew “Americans” – i.e., white people – were just a few blocks away, or when they came into our ‘hood for good, cheap food, firecrackers, haircuts, and illegal lottery tickets.

Going to American school in the 1940s and ‘50s began my process of integration, of Americanization. I learned English, which became my go-to spoken tongue over my native Hoisanese/Cantonese. I gobbled up English-language written words, radio and TV shows, and Hollywood movies, forsaking my Chinese school lessons and Pop’s Confucius teachings.

It wasn’t until after I left Chinatown in the 1960s that I learned about the negative effects of the Chinese exclusion law as well as the white supremacist zeitgeist of America, and when I began to seriously wonder about my Chinese American identity.

My life experience, including my career as a newspaper writer and editor, taught me that some Americans think poorly of us who are of Chinese and Asian descent. To them, we are forever foreigners, even though a lot of us were born in America and many more have become American in a broad cultural sense.

So much about Chinese America and Asian America has changed in my lifetime. We were once so few and confined mostly to Chinatowns. Almost all of us ethnic Chinese traced our China roots to Guangdong Province, or the Greater Hong Kong region, which is more formally called the Pearl River Delta. We were and are Cantonese.

After the exclusion law was repealed in 1943, after World War II, after the Chinese civil war won by Mao Zedong’s Communist Party, after the defeated Chiang Kai-shek-led Kuomintang (Nationalist Party) fled to Taiwan, after Congress liberalized American immigration laws in 1965, Chinese America began to expand from the one-note old-school Cantonese model that produced me, my older sisters and thousands like us.

The new-school Chinese America is much more numerous and has many more roots in Beijing, Shanghai, Fujian, and other regions of vast China, to say nothing of ethnic Chinese from Southeast Asia, Latin America, and beyond. There are still some with a similar profile as my parents, but many more are better educated, wealthier and don’t carry the psychological burden of the exclusion law.

That’s just the ethnic Chinese part of an invigorated Asian America. The old model of Asian America had, in addition to the Gold Rush-railroad-exclusion Cantonese Chinese, Japanese, Filipino, and Korean immigrants and their descendants. The new has immigrants and refugees from farther reaches of Asia and the Pacific islands.

Since the 1970s, I’ve watched with interest and amazement this newer Chinese America and Asian America. I’ve felt both a kinship and an alienation.

Every so often, I visit two of my sisters in Silicon Valley, and we go out to eat at Chinese restaurants. That’s where I feel like a foreigner, unlike the Oakland Chinatown joints I’m so used to. At these Silicon Valley eateries, I hear a lot more Mandarin spoken; luckily, one of my sisters speaks a little Mandarin to help us order.

I have a niece living in the San Gabriel Valley east of Los Angeles. That’s one of the epicenters of the new Chinese America and Asian America. I’ve visited my niece and her family a couple of times over the past 10 years, and I was both amazed and unsettled in seeing blocks and blocks of Chinese and Asian-run businesses where many patrons chatter away excitedly in Mandarin and other Asian languages unfamiliar to me. Where are the Cantonese Chinatown Chinese?

Some of us old-timer Chinatown Chinese Americans, perhaps out of jealousy or envy, have observed the ignorance and indifference of the newer Chinese Americans and Asian Americans about institutional racism (the exclusion law) visited on us old timers and our forebears.

I understand this ignorance and indifference, sort of. That’s old stuff, buried in history, yellow newbies might say. We’re here now, populating well-to-do suburbs, sending our kids to Ivy League colleges, and leading high-tech companies that produce the latest gadgets and technologies that America and the world want and need for a better, faster and buzzier life.

It is from this larger, more diverse Chinese America and Asian America that has come scientific, technological, cultural and political stars who have become part of the elite American mainstream, a status impossible when Pop and Mom ran their Oakland Chinatown restaurant.

Here is where I reveal how naïve or clueless I may in fact be. I thought that with this influx of smart, well-educated, hardworking “new” Chinese and Asian Americans spread throughout the dynamic American economic, social, political, and cultural infrastructure doing some great innovative work, we yellows collectively would be immune to the stupid, irrational and brazen racism that marked the first 100 years of Chinese America and Asian America.

I’ve been watching a lot TV coverage of the pandemic, and I see many Chinese American and Asian American doctors and scientists offering sound advice and expertise. Dr. David Ho, for example, is working with his team to find a vaccine against the coronavirus. He’s the scientific genius who pioneered breakthrough HIV/AIDS research.

This is where my emotions grow from shock to anger. No, not again! Why the recurrence of anti-Chinese, anti-Asian racism?

Because so many Chinese Americans and Asian Americans are embedded in American life, how could racism against us explode again? 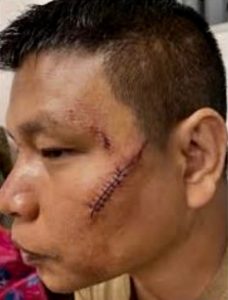 Bawi Cung Nung and his son Robert were stabbed at Sam’s Club in Midland, TX by 19-year old Jose Gomez on March 14, 2020. Photo from Nextshark.com

That it has been happening tells us a lot about America today. Our society isn’t far past its ugly, racist past, is it? Our racist president isn’t to blame for starting this latest trend, but using his Twitter feed and bully pulpit, he sure is propelling it.

That’s both distressing and distracting at a time when all of us, regardless of color, race, ethnicity, culture, religion, sexual orientation, politics, or socioeconomic status, are threatened by a killer virus.

So I say to those Americans who still hate on us yellows, get over it. Some of us are trying to find a cure and to care for the sickest. You should be thankful, not hateful. 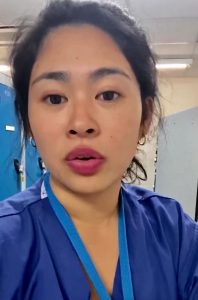 Nurse Reizel Angela describes how a couple yelled at her: “At least we’re white, you fucking cunt” as she headed for the night shift at the hospital. See video: https://www.facebook.com/Republic.of.reizel/videos/3422010924482474/

William Gee Wong is the author of Yellow Journalist: Dispatches from Asian America  and Images of America: Oakland’s Chinatown. 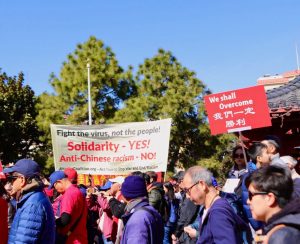