This article is a companion piece to the interview with Cathy Dang, Executive Director of CAAAV, Organizing Asian Communities, which also appears in East Wind ezine, Fall 2018.

Meeting, supporting, and working with Cathy Dang and others in today’s new generation of community activists, leaders and organizers has been awesome! While so much is new and different, there are many themes and experiences that resonate with my history … going back 40-50 years! 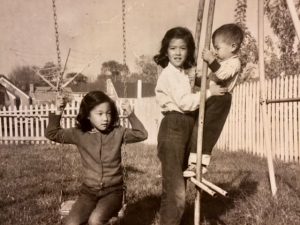 May Chen (standing) with siblings in 1956. Photo courtesy of May Chen.

Although we come from different backgrounds, and grew up in very different time periods, I really relate to Cathy’s experiences and views. My early history was growing up in an immigrant family and getting inspired by the civil rights movement when I was in high school. I became more politically engaged during college, joining protests against the Vietnam War and the fight for women’s rights. Moving away from family in the East Coast to graduate studies and activism for ten years in Los Angeles, I met and worked with dedicated Asian American activists, community organizers, and leftist, anti-capitalist political thinkers. I learned so much (that is never taught in school) about racism, labor exploitation, and ugly American exploits internationally. 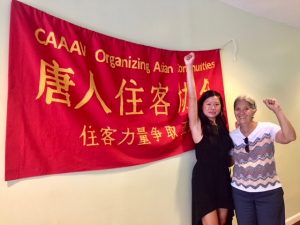 Cahty Dang and May Chen at the CAAAV office. Photo courtesy of May Chen.

Moving to NYC in 1979 with a young family, I was drawn into community organizing in New York’s Chinatown and taking jobs with labor unions. I devoted my career to organizing, educating and mobilizing immigrant workers. Three key themes from Cathy’s work served as points of discussion and comparison across our generations.

Base-building, mobilizing and organizing immigrants. As a college-educated activist, I had to learn how to work with grassroots people (“integrate with the masses”). My core perspectives stem from a deep belief in the promise of democracy and our rights to sit at the table and express our views and needs. This cannot happen if the people/community are not educated and organized with you. AAPIs should not be invisible, silent or marginalized! Coming of age in Los Angeles in the Asian American Movement was so wonderful, even as we faced many of the tensions Cathy discusses between college-educated young activists and immigrant community people. As an idealistic young person, I made my share of mistakes, but this is how I learned what works and what doesn’t for the community! 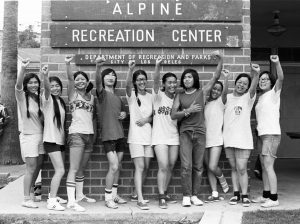 The 1982 garment workers strike in NY’s Chinatown was a revelation. Worker leaders agitated the union members in rousing Chinese speeches at rallies of 10,000 workers. Everyone was transformed and educated by these actions. We worked on countless campaigns, winning some and losing some. And what endured and expanded was the base, and the deep mutual trust and friendships we built in the community through the 1980’s, 1990’s and beyond 2000, even today. The thinking and ideology of today’s immigrants may be different, and yet the challenge of base building, educating, and organizing remains. I believe that new immigrants strive to learn and to belong, and they know how to rally their compatriots when the cause is right. 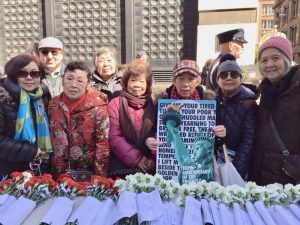 May Chen with union retirees at annual Triangle Fire commemoration. Photo courtesy of May Chen.

Combatting right-wing conservatism and offering alternative visions. I grew up in the very conservative 1950’s-1960’s in the wake of McCarthyism and the cold wars. It took years of massive social movements and protests (and activist sacrifices) to move new agendas for civil rights, women’s rights, and other advances that were won in recent decades. The Asian communities, and each specific nationality group, had sharp left/right views and struggles, some reflective of class differences and some baggage carried from past experiences. Organizations and leaders who gave voice to progressive policies and views were so important in winning support and making change. Today’s right-wing political, social, and opinion leaders are fighting to take us back in time to my childhood days of blatant white supremacy, oppression and exploitation. We need to rally today’s tools to push back and hold our ground, to celebrate diversity and inclusiveness, to mobilize our base and put the brakes on these attacks.

Cathy and CAAAV took a very courageous stand in supporting Akai Gurley’s family in the Peter Liang case, and they suffered tremendous harassment and backlash as a result. The indictment of Peter Liang seemed unfair to the Chinese community while white career policemen got away with unbelievable crimes including many unprovoked beatings and killings. I was very distressed to see such Chinese community protests when I remember so many complaints from Chinese immigrants of police harassment and insensitivity throughout my career in NYC: excessive traffic stops and tickets; sexual harassment of Chinese women; beatings or “stop and frisk” of Chinese youth (“gang suspects”) and street vendors; and others. Akai Gurley was a young father. He was black. Relations between Asians and blacks have become more and more tense, especially as mainstream and community media intensify images of conflict. We need to do a lot more to examine and address racial prejudices in our Asian communities, and to find ways to resolve conflicts and build more understanding. Positive examples of cooperation and struggle, friendship, and mutual support need to be publicized more broadly.

Solidarity forever. A wonderful song and beautiful slogan, “Solidarity Forever” is a real and precious goal for me, a road to success and victory. Back in the day, within the movement and popular culture, there was a strong understanding of the need for “third world unity” and mutual support for common causes. Being brought up in the labor unions, solidarity was a necessary part of winning good contracts, benefits, and gains for everybody. 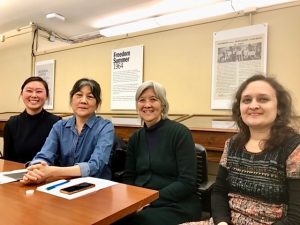 Back in the day, there were positive concrete results of joint struggles taken up by blacks, Latinx, Asians, women and youth including new programs on campus and in the communities and workplaces. Affirmative action opened doors to higher education and more diverse jobs for all the groups. Community leaders strived to study, learn and share more about different groups, countries and cultures. A progressive pop culture promoted feelings of mutual support and respect. “Third World Solidarity” also mirrored the international alignments back then: a majority of poor countries around the globe with “colored” populations fighting big superpowers. Today, these international alignments have evolved and changed. China is now a superpower. Things are very different now. 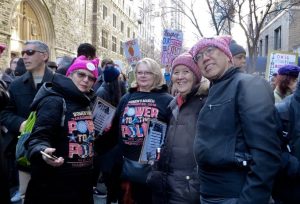 May Chen, Rocky Chin and friends at Women’s March in NYC, January 2018. Photo courtesy of May Chen.

Unfortunately, today people are very divided and individualistic, distrustful and isolated. Academia, as well as popular culture and media, tend to emphasize nationalism and/or “cultural studies” of individuals and specific separate groups. Pop music, poetry and culture focus on individual issues, rather than collective actions or needs. So much of news, pop culture and media images are negative – alienated, angry, selfish, cut throat… Competition and frictions dominate world relations. I can barely think of places where someone can get broader information unless they really look for it – through study or travel. Thankfully, young people travel and can meet diverse people more easily.

In the political scene, “divide and conquer” has become wildly successful at dividing communities and pitting them against each other… good immigrants and bad immigrants, model minorities, groups more and less deserving of funds. Competition for funding and attention creates walls of territoriality and secrecy. What is to be gained with “solidarity”? It doesn’t seem like a natural or normal idea compared to the old days.

It’s getting clearer than ever that major gains of recent decades are under attack and annihilation one by one: the environment, labor rights, women’s rights, immigrants’ rights… We need to find a way back to solidarity, and to practice supporting each other collectively to win for all of us.

I am inspired to watch, support, and march with Cathy Dang, CAAAV and other young progressive groups. I am hopeful for a bright future for her and other activists and leaders, and confident in a better tomorrow as we fight together!

May Ying Chen is retired. She was an adjunct professor at CUNY’s Joseph S. Murphy Institute and coordinates the US-China Exchange Program – Advancing the Field of Labor Relations from 2009-2015. Until her retirement in 2009, May was the Manager of Local 23-25 Workers United/SEIU and Vice President of the International Union. Chen graduated with a BA from Harvard-Radcliffe and a Masters in Education from UCLA. She enjoys spending time with her grandchildren and considers herself an activist and storyteller.