Tsuru for Solidarity, Japanese Americans for Justice, Sacramento Immigrant Coalition, Jewish Action Nor Cal, Centro del Pueblo – Humboldt, Estamos Unidos, the Japanese American Citizens League – Florin chapter, the Council on Islamic Relations and many other community and religious organizations joined together on January 11, 2020 to protest the detention of immigrants held in facilities like the Yuba County Jail and other private prisons throughout the United States.  Over 100 people attended the rally in Marysville, California. 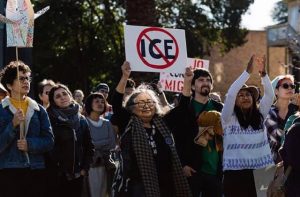 Kathy Kojimoto, media coordinator for Tsuru for Solidarity, spoke about the significance of the rally coinciding with the new year: “Tsuru for Solidarity was invited to join this ongoing vigil and protest at the Yuba County Detention Center and Jail that has been going on for over a year by the Sacramento Immigrant Coalition,  the Interfaith Movement for Human Integrity and other immigrant right groups. This was a great opportunity to celebrate Oshogatsu, Japanese New Year’s, a time for reflection, renewal and for taking care of home and those we love. It is a time of making things right with our neighbors and community members. In this spirit, we want to ‘Clean House.’”  The UC Davis Bakuhastu Taiko Don lifted the crowd’s spirits with a rousing performance. Several speakers criticized the renewal of a contract between the county jail and ICE (Immigration and Customs Enforcement). The county receives nearly $20,000 per day for imprisoning nearly 160 detainees. Many of the prisoners have not committed crimes but are in jail for being undocumented and thus face deportation.

The Yuba County Jail has long been criticized for inhumane treatment of prisoners and detainees. In July 2019, 16 detainees refused food for four days in protest of mistreatment. This was the third hunger strike held at the jail in 10 months.

The detainees and protesters were able to share one moment together. Here’s an account posted on Facebook by Japanese Americans for Justice: There was one intense moment when people who are being incarcerated at the Yuba City ICE detention center were able to get outside on the roof and shout out their encouragement, their appreciations, and their names— telling us not to forget them. Our hearts are full, and our spirits are resolute as we continue to organize for an even bigger mobilization to Washington DC this June, where we will continue to fight to close all the US concentration camps. For more information about Tsuru for Solidarity’s National Pilgrimage to Close the Detention Camps June 5-7, 2020, visit https://tsuruforsolidarity.org/ 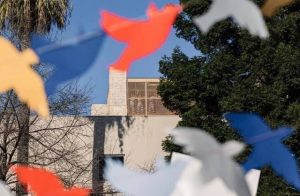 Detainees on the prison rooftop greet the rally. Photo by Kristen Murakoshi/JAs for Justice.

Kathy Kojimoto added, “Tsuru for Solidarity is a non violent direct action project that stands on the moral authority of Japanese Americans who suffered great injustices in U.S. concentration camps during WWII. We stand in solidarity with communities being targeted today and to demand an end to today’s concentration camps.”

One of the protesters, Jun Hamamoto, was refused admission to visit Tith Ton, a Cambodian man who faces deportation in July 2020. Mr. Ton was born in a refugee camp and has lived his entire life in the United States.  Even though he served a 22-year sentence at San Quentin Prison, upon his release, ICE picked him up and sent him to jail bound for deportation. Jun Hamamoto was Mr. Ton’s origami teacher at San Quentin prison. 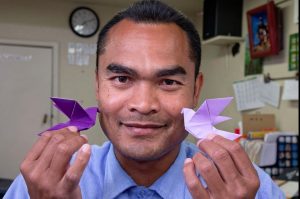 Although she was not allowed to visit him, Mr. Ton called her that evening and expressed the appreciation of all the ICE detainees for the supporters who rallied in front of the jail.  To learn more about Tith Ton’s campaign for justice visit these websites:

Organizers of the rally intend to keep the pressure on the Yuba County Jail and demand that all detainees be treated humanely and be released to family and community members as they await disposition of their cases.

For additional information about the January 11, 2020 rally visit https://www.kcra.com/article/marysville-protesters-gather-outside-ice-detention-center/30483112#

Author’s bio: Eddie Wong is the editor/publisher of East Wind Ezine.  He thanks Kathy Kojimoto and John Ota for supplying the information and photos used in this article.