What will it take to end Police Killings of African Americans?

The “deep reflection and structural reforms” promised after Watt’s in ’65 and the L.A. insurrection which came from the Rodney King beating in 1992 did not take root and has been eclipsed by militarization. Today police and ICE units look like occupying armies in POC communities and the border. The FBI identifies “Black identity extremists” as a national security threat more than white supremacists with ties to mass shootings.

We support the demand for improvements raised by families and communities victimized by cop shootings throughout the US like; filtering out racist cops, better training, body cams, chokehold-bans, more Black cops and citizen review boards. POC communities in deep red counties and townships are struggling to win even these “modest” changes.

In Camden, NJ, the entire police force was dismantled and fired 2 years ago. They were replaced with a larger county-wide police force which instituted “community policing” and now claim good results.

These “Obama-era” reforms have shown some improvement to reduce police brutality in some cases.  but by themselves will not stop the police killings of African Americans.

In addition we support calls to: Defund and demilitarize the police, free people from prisons and jails, repeal racist laws and invest in community self-governance and affordable, safe housing.

Inequality creates more conflict between rich and poor and intensifies racism. Racism conversely intensifies inequality, which today, is greater now than since the 1920s prior to the Great Depression. 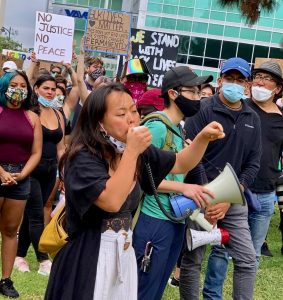 Each year there are far more evictions than affordable housing built. More unhoused people on the street requires more police to control them. Flashpoints for police abuse grow.

Companies buy robots or move overseas searching for cheap labor to make profit. What kinds workers will be first fired and last hired? Black unemployment is at 50%. How many tense situations with police will result from that?

Marathon Oil spews thousands of pounds of toxins into Carson and Wilmington each year. When the neighborhood protests to protect their health police will be called to protect the company if they feel threatened. More tense moments for police abuse, whether breaking up a crowd or patrolling the street.

Evictions, job loss and the poisoning of our communities continues because developers, corporations and bankers pursue profit over the welfare of people. In the US, the victims are disproportionately working POC in particular African Americans. 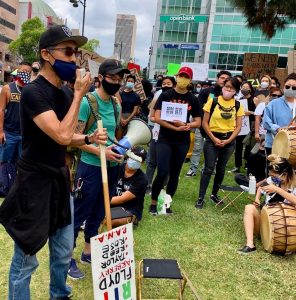 “The US military is the LAPD’s big brother pulling over cars of Black folks in South Central and ships in Somalia or showing off their SWAT team in the South China Sea,” said David Monkawa (PANA).

The original US empire was created by slavery and the genocide of indigenous people. Every eviction, every lay-off, every police encounter with an African American is a modern-day extension of that original domination. Regardless of the good or bad intentions of the actors.

Most all laws about property, finance, immigration and labor benefit the .01%. Three white men control the majority of wealth in the country. Jeff Bezos, making $9 million per hour. Bill Gates $1.5 million and Warren Buffet $1 million per hour. Most Americans don’t have $1,000 for emergencies. The police must enforce the laws that protect this immoral and insane social order.

The major uprisings which occur about every 27 years led by young working-class African Americans is an outcome of rising inequality and injustice.

In August 1965, Marquette Frye, 21-year-old Black motorist was roughed up by a white cop in Watts. This was the spark but the gasoline was poured way before. Just 9 months before CA Prop 14 was passed by developers and white supremacists. It took apart the Rumford Fair Housing Act that made housing discrimination illegal. A hard-earned victory led by African Americans, later restored by the Supreme Court. Before the 60’s Blacks and Asians, mostly Japanese and Chinese Americans, faced discrimination living west of Western Ave. A few months after Rumford was repealed the assassination of Malcolm X in Feb.1965 made people even angrier.

The African American liberation struggles led the push for President Johnson to initiate the “War on Poverty” in 1964. A package that included the Job Corp, Food Stamps, Medicare and Medicaid. After Watts exploded federal funding poured into Black communities and police reform programs were instituted by the government. But the FBI also destroyed the Black Liberation movement for system-change by infiltration and assassinations. Inequality continued to rise and a few years later in the 1970s all federal money for housing was cut. 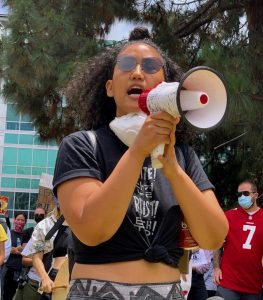 In April 1992, the acquittal of 4 white cops for the beating of Rodney King, was the spark. The gasoline?  By ’92 auto, steel and manufacturing left LA. The “War on Drugs” that helped create the crack epidemic and began mass incarceration also produced the highest rates of deadly police shootings. The Reagan-Bush years created more inequality than all other presidencies combined. CEO salaries rose1,000% since the late 70s.

Second place in the creation of inequality were the Clinton- Obama years. The Clinton Crime Bill increased mass incarceration. Black home owners suffered home foreclosures disproportionately in the 2008 financial meltdown. Post 911, the growth of the military-industrial-police complex under the DHS and 4 years of Trump’s white supremacist rule provided the gasoline. George Floyd, Ahmaud Arberry and Breonna Taylor provided the spark that lit up the world.

Wall St. profits from police misconduct. They issue loans to departments nationwide for brutality lawsuits and make millions on interest. Their friends in the military-industrial-police complex assisted by the DHS, directly markets its products to thousands of police departments and ICE so that tanks, grenade launchers, helicopters and drones can be purchased with public monies.

The US has invaded or fought in 84 out of 193 countries recognized by the UN as the global policemen protecting the interest of US billionaires. A culture of militarization permeates the police. The budgets of the city of Los Angeles and the US government both allocate 54% to the LAPD and US military respectively.

Cop shootings and racism can end by changing to a people-over-profit system. 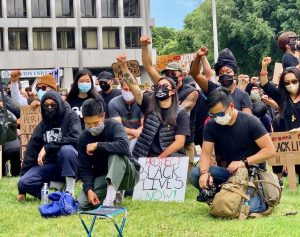 In a people-over-profit system, a national plan would distribute justice to those who have been denied justice the most. Indigenous nations and peoples, African Americans, impoverished POC in urban and rural communities including in the 16 so-called “US territories.”

New Dept of Justice commissions would hold hearings like the Truth and Reconciliation Commissions in Canada for First Nations people, or in post-apartheid So. Africa or for Japanese American redress. They would recommend remedies for environmental damage, police abuse, military occupation etc.  For some, the remedy may be a vote to decide their future relationship with the US. For others, federal help to build a self-sufficient green economy and infrastructure and support for their cultural institutions.

Within this framework, regular beat cops would enforce laws which protect working people, people of color, women, LGBTQ peoples. They may issue a citation to a Walmart manager for abusing a worker or to pharmacies that overcharge elderly. Or patrol the polls on election day to make sure there is no voter suppression. Even pull you over for a suspected gender slur. Skills in family dispute resolution and non-lethal weapons would be required. Police would be accountable to real neighborhood councils with decision making power. The Klan and Nazis will be illegal.

We need to press for such a system through the ballot box and mass actions to pressure the .01%  based on non-violence, self-defense and organization.

We respect the leadership of the African American movement on these issues and support the “Black Agenda” advanced by Black Lives Matter. 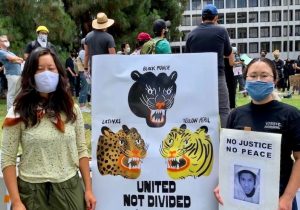 Asian and Pacific Islanders like all Americans have benefited from the struggles and sacrifices of the African American Civil Rights and Black Power movements which began with uprisings. Asians would still be calling ourselves “Oriental” and no Asian movement would have existed. We would not be able to live in WLA, Torrance or the San Gabriel Valley or work in desegregated public sector jobs. Redress and Reparations for Japanese Americans was first supported by an African American lawmaker and later by Jesse Jackson. The civil rights we now enjoy in the shade is the result of trees planted by African Americans years ago. Support the Black Lives Matter movement.

Millennials are getting CRUSHED by crisis, it will lead to radicalism

Don’t Fall for “Cop-aganda” They kneel today and beat us tomorrow.

An army of 30 million downwardly mobile millennials led by African American youth, have been cooped up for months watching trillions of dollars go to Amazon & Boeing while they get crumbs.

“It is in part, an effort to head off more drastic measures that some on the left, under the slogan “defund the police” are pushing.”

Theres a growing call to “defund” the police. Here’s what it means

Minneapolis is not the first city. Camden New Jersey has dismantled and fired every member of their police dept.

However, the fired cops had an option to re-apply to join the county-wide police dept. who took over with an even larger force.

They claim a two-thirds reduction in crime but critics claim sample sizes are small and that changes are too tepid.

Camden’s Turn: Presented by the US Dept of Justice

Peace, Justice and Equality for the 99%

PANA is an all volunteer organization. Meetings: 2nd Sunday of each month 4pm to 6pm location TBA

Editor’s Note: Much appreciation to Marina Peña, PANA, and Asians Never Die for use of their photos and video.